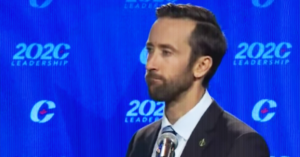 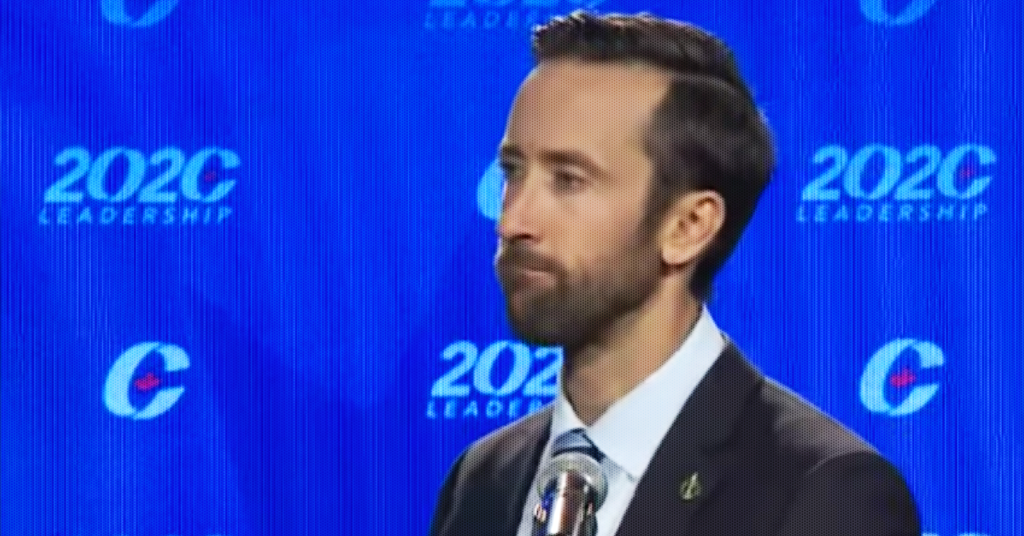 “Mr. O'Toole is outraged that anyone would accept donations from this individual and will be looking into the matter”

The Conservative Party of Canada says party leader Erin O’Toole is “outraged” after discovering one of his MPs accepted money from a notorious neo-Nazi.

The Conservative leader was reacting to a request for comment from PressProgress inquiring about Elections Canada records that show neo-Nazi Paul Fromm donated $131 to the Conservative Party of Canada in 2020.

Conservative Party Communications Director Cory Hann told PressProgress the donation was not directed to the party, but to the failed Conservative leadership candidate Derek Sloan, who is currently a sitting MP in O’Toole’s caucus.

“Mr. O’Toole is outraged that anyone would accept donations from this individual and will be looking into the matter.”

Confirmation of the neo-Nazi donation comes a day after O’Toole issued a statement distancing himself from Trumpist extremism and declaring under his leadership, the Conservatives intend to be a “moderate, pragmatic, mainstream party.”

“There is no place for the far-right in our party,” O’Toole emphasized.

“I am proud of Canada as a welcoming, modern, and inclusive country.”— My statement. pic.twitter.com/Uu54A34T08

Fromm’s postal code matches one used to place a donation to the white nationalist Canadian Nationalist Party in 2019.

Fromm self-identifies as a “white nationalist” and rejects the term “Nazi” because he thinks the word is a meant to belittle Adolf Hitler’s party, however, organizations that closely monitor hate groups, including the Southern Poverty Law Center and the Canadian Anti-Hate Network, have identified Fromm as a neo-Nazi.

A 1994 government report prepared for the Solicitor General alleged Fromm personally helped organize a birthday party for Hitler, which was to be attended by local skinheads. The report also observed that Fromm spoke at a “Martyr’s Day Rally,” an event honouring the death of an American neo-Nazi leader.

Fromm has also appeared in photographs with members of the neo-Nazi terrorist group “Blood and Honour,” an “international neo-Nazi network” that was added to Canada’s official list of terrorist groups under the Criminal Code last year.

In one photo, Fromm can be seen wearing a “white pride” t-shirt holding the group’s banner as members of the terror group make Nazi salutes.

Fromm’s social media postings show that he repeatedly promoted Sloan’s campaign in August 2020, around the same time as his donation.

In one post dated August 3, Fromm shared a link to his website praising Sloan for his pledge to repeal human rights legislation protecting gender identity. On August 10, Fromm again praised Sloan for opposing orders to wear masks in public during the COVID-19 pandemic. 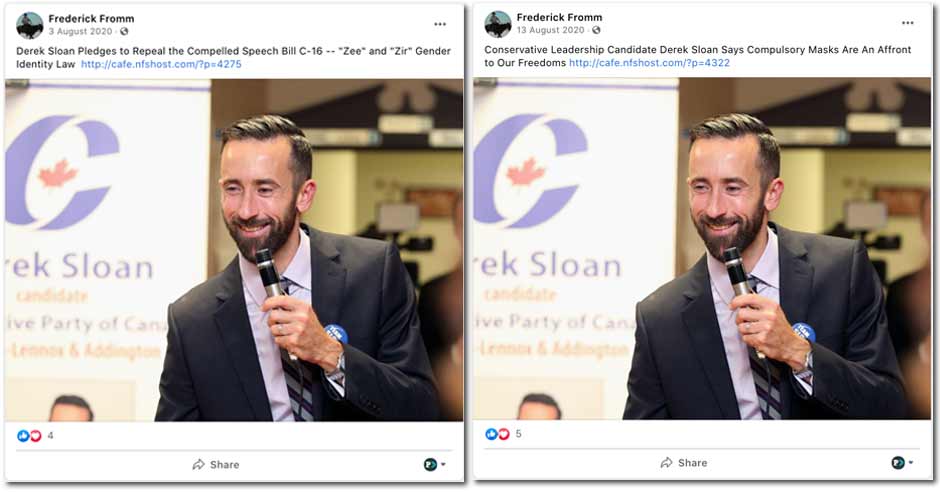 On “Canada First Immigration Reform Committee,” another website that is run by Fromm, the neo-Nazi solicited donations on behalf of Sloan’s campaign using text that appears to have been copy-pasted from Sloan’s campaign emails.

One solicitation on Fromm’s website praises Sloan as “the only immigration reformer running for the leadership of the Conservative Party of Canada,” and quotes Sloan as stating: “I am the only leadership candidate who has pledged to lower immigration levels.”

The page includes a red donation button that links to Sloan’s campaign website. 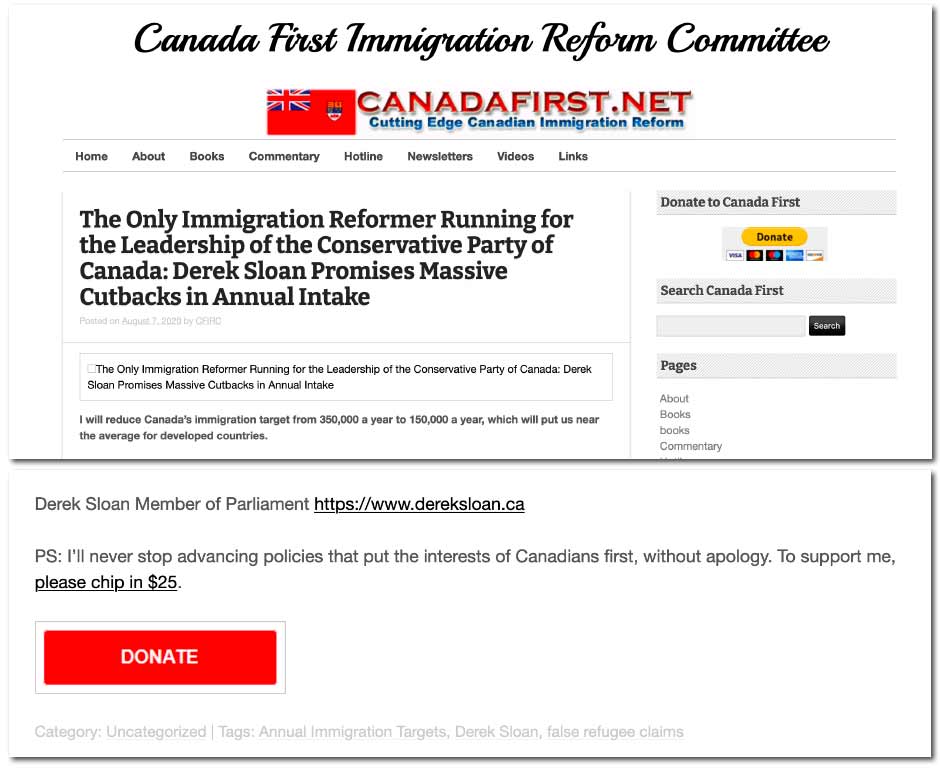 Sloan, who is one of the Conservative Party’s hardline social conservatives, has been a source of repeated controversy for the party.

Last year, Sloan made national headlines after suggesting the “cause of sexual orientation” is not “scientifically clear.” More recently, Sloan has courted controversy by opposing legislation that would ban conversion therapy.

Sloan faced calls to be kicked out of the party after questioning whether Theresa Tam, Canada’s Chief Public Health Officer, is more loyal to China than to Canada.

Last month, the Conservative MP also came under fire after sponsoring a petition that described the COVID-19 vaccine as “human experimentation.”

The Conservative Party did not clarify if they intend to return the donation.

Fromm last donated to the Conservatives in 2004 when made a $300 donation to Conservative MP Bob Dechert’s campaign.

Update: Following publication of this story, Conservative leader Erin O’Toole issued a statement indicating he has “initiated the process to remove Mr. Sloan from the Conservative Party of Canada caucus” and “will not allow Mr. Sloan to run as a candidate for our party.”

O’Toole said Sloan’s acceptance of the donation from Fromm was “far worse than a gross error of judgment or failure of due diligence.”

Racism has no place in the Conservative Party of Canada. My statement: pic.twitter.com/TP6uATWOi3

Conservative MP Derek Sloan also issued a public statement indicating he was not personally aware of Fromm’s donation prior to PressProgress‘ reporting.

“Paul Fromm is a notorious name to some, but not to everyone, and clearly this name, mixed as it was in the midst of thousands of other donations, did not ring any bells to my team,” Sloan said, adding he has “requested this donation be returned.”

Upon learning about what happened, I immediately contacted the Executive Director of the Conservative Party, Janet Dorey, and requested this donation be returned.”

Editor’s Note: This article was updated shortly after it was first published to include additional information showing Fromm had promoted Sloan on social media and actively solicited donations on behalf of Sloan’s leadership campaign.