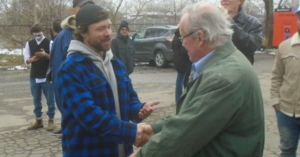 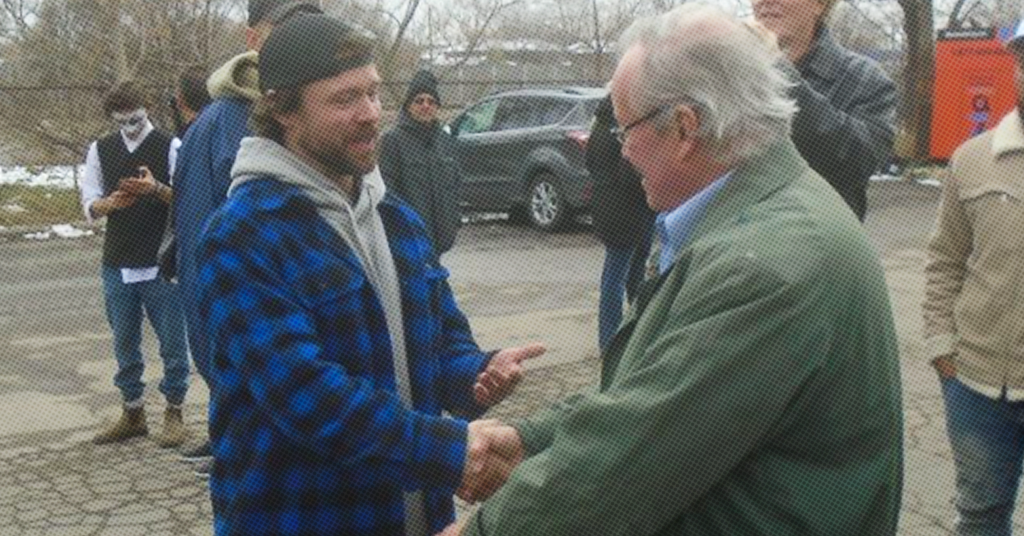 A man known as one of Canada’s most notorious neo-Nazis is calling on followers to support a Toronto-area restaurant owner who made national headlines last week after he tried to remain open in defiance of public health rules.

Adam Skelly, owner of Adamson Barbecue, has been thrust into the public spotlight thanks to Canada’s right-wing media, which is building up the restaurant owner as a kind of folk hero for far-right protests against public health measures.

And Skelly can count on one more supporter — Canadian neo-Nazi Paul Fromm.

Fromm, who self-identifies as a “white nationalist” and rejects the term “Nazi” because he thinks the word is a derogatory slur meant to belittle Hitler’s party,  posted a photo on his Facebook Tuesday showing a meeting with Skelly in which Fromm warmly shook his hand.

“Fight back against the medico-Stalinist tyrants in Ontario,” Fromm wrote, directing his followers to a GoFundMe page for the “Adamson BBQ legal defence fund.” 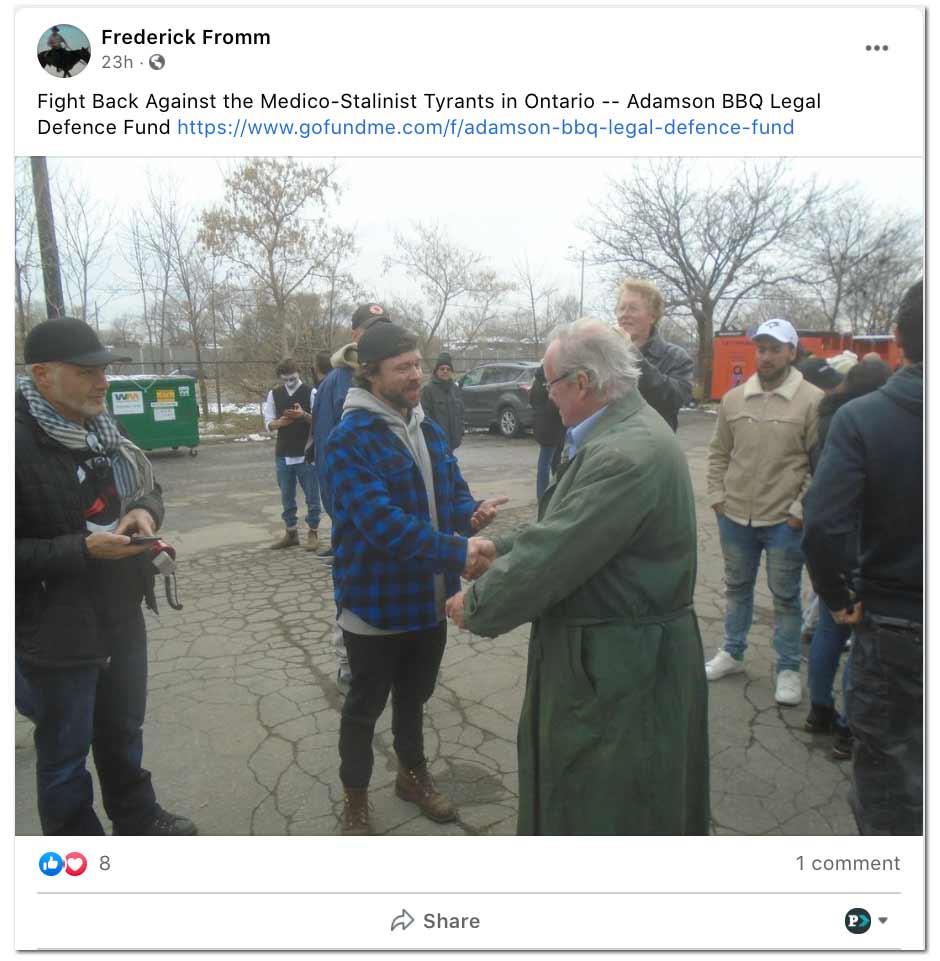 Adamson Barbecue did not immediately respond to a request for comment from PressProgress about Skelly’s meeting with Fromm.

Despite his claim that “Nazi” is merely a communist slur, Fromm has been identified as a neo-Nazi by prominent organizations that monitor hate groups, including the Southern Poverty Law Center and the Canadian Anti-Hate Network.

Over a decade ago, Ontario’s College of Teachers revoked Fromm’s teaching license after his ties to far-right extremism surfaced, which included appearance at events hosted by the white supremacist Heritage Front.

“The member spoke against multiculturalism and non-white immigration, (and) used racist language in relation to Jews, Asians and aboriginal people while participating in public events involving individuals and organizations with racist views,” the College noted.

Fromm also attended a birthday celebration for Adolf Hitler. A 1994 government report prepared for the Solicitor General alleged Fromm personally helped organize the birthday party for Hitler, which was to be attended by local skinheads.

The report also observed that Fromm spoke at a “Martyr’s Day Rally,” an event honouring the death of an American neo-Nazi leader. According to the SPLC:

Fromm promotes Holocaust denial and has claimed that the only victims of a Holocaust during World War II were the Nazis:

Fromm has also appeared in photographs with members of the neo-Nazi terrorist group “Blood and Honour,” that previously went by the name “Aryan Guard”  — in one photo, Fromm can be seen wearing a “white pride” t-shirt holding the group’s banner as members of the terror group make Nazi salutes.

Last year, the Government of Canada added the “international neo-Nazi network” to Canada’s official list of terrorist groups under the Criminal Code.

Fromm had been spotted milling around Adamson Barbecue last week, although it was not immediately clear why he was in attendance.

According to reporters on the scene, Skelly declined multiple requests for interviews even as questionable characters arrived to show their support.

Self-described white nationalist Paul Fromm, has arrived to support Adamson BBQ. I wonder if this is the type of support owner Adam Skelly was hopping for today when he opened his restaurant? I’ve asked Mr. Skelly for an interview multiple times today. He’s declined. pic.twitter.com/23kO5HJPaX

Canadian protests against pandemic-related public health measures have been largely driven by a ragtag group of individuals drawn from anti-vaccine activism, 5G, flat earth and QAnon conspiracy theories, as well as the far-right.

Fromm has himself been spotted at previous anti-public health protests.

Skelly is currently facing over a dozen charges including obstructing police following the incident last week — former customers, meanwhile, have taken to social media to insist they will not be returning to his restaurant.