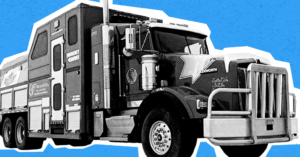 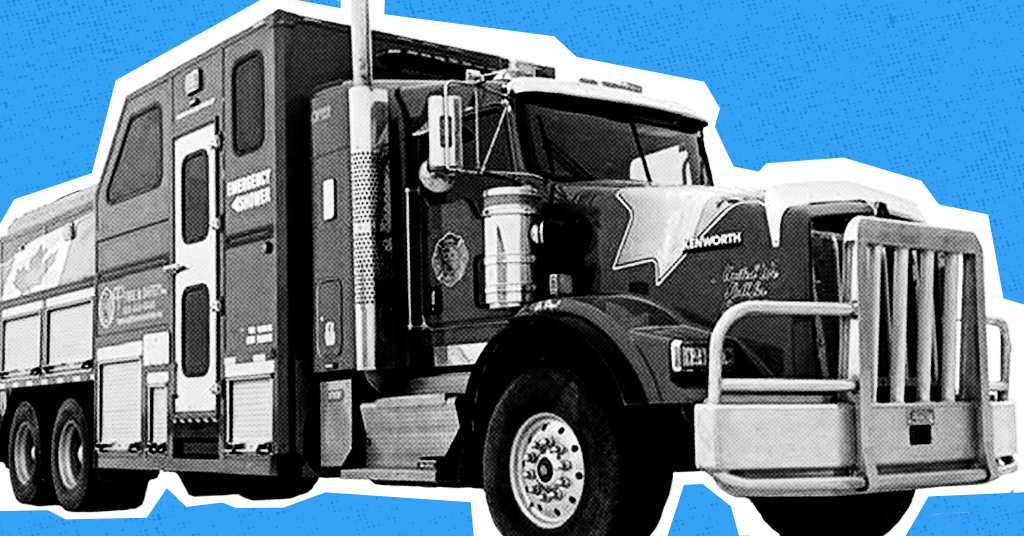 The leader of a convoy that converged on Parliament Hill this week is shrugging off suggestions members of his own convoy felt they were “misled” about money and that poor planning put the safety of “women and children” at risk, dismissing the criticisms as nothing more than “sour grapes.”

“We’re not babysitters,” Glen Carritt told PressProgress. “This was a successful story for Canada.”

Carritt, a small town business owner and town councillor in Innisfail, Alberta, is the lead organizer of the “United We Roll” convoy to Ottawa and presented himself as its public face during numerous media appearances in recent weeks.

But following concerns over safety within the convoy and complaints Carritt has been slow to disburse money raised in support of the trans-Canada odyssey, some convoy participants say they now feel hoodwinked. 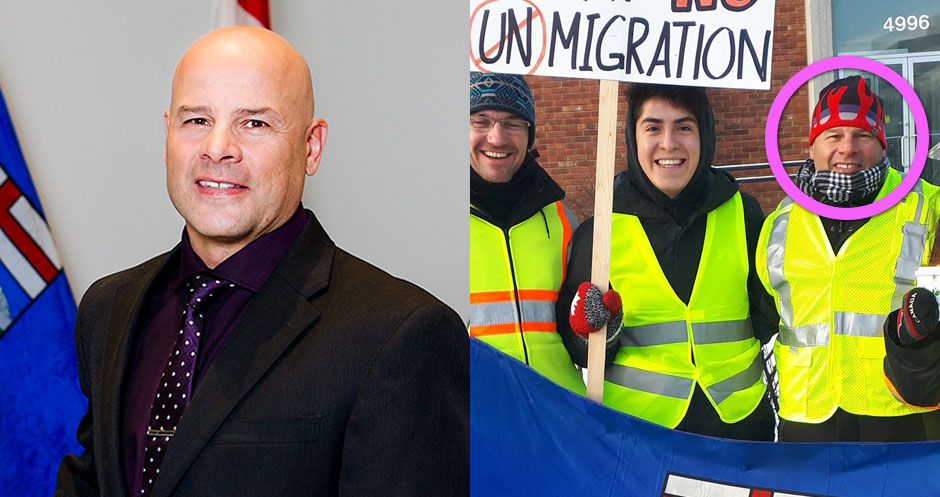 Cathy Monteath, a welder who left home in Peace River, Alberta with her husband and 17-month-old daughter to make the 4,000 km drive to Ottawa, says some convoy members struggled to pay for food and gas as the convoy sped across the country in sub-zero temperatures.

“I didn’t get any help,” the Alberta mom told PressProgress. “Me and another trucker here spent a night laying on the ground trying to siphon fuel out of a truck.”

That’s echoed by Peggy-Lee Glenn of Sexsmith, Alberta, who helps run one of the numerous far-right Yellow Vest pages operating on Facebook.

“There’s lots of people who’ve been paying out of their pocket and not being reimbursed,” Glenn told PressProgress.

Glenn said she knows one convoy member who “has not received money from the GoFundMe,” meaning “him and his parents have been footing the whole bill.”

“There’s people that have been sleeping in their cars, there’s a lot of people who went under the impression at least some of their expenses would be covered.”

“I’ve personally sent money to help out with their expenses,” she added. 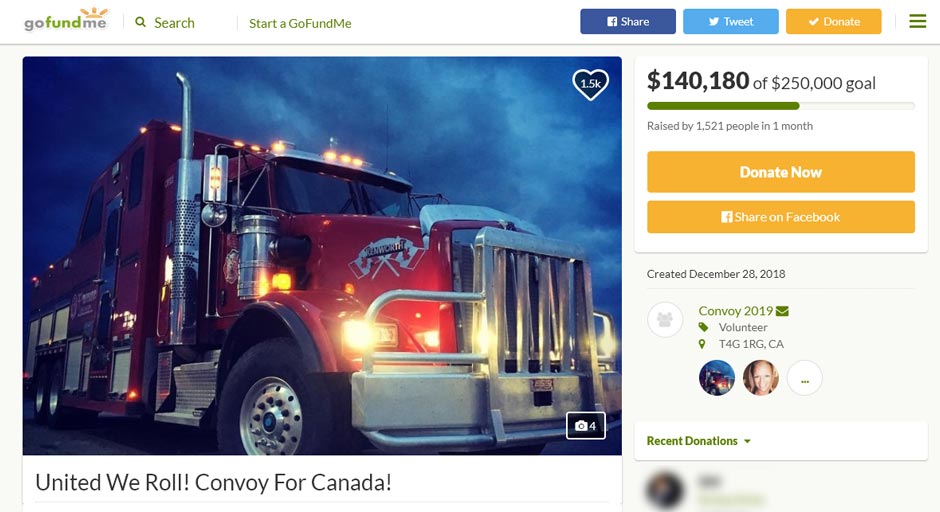 The convoy began after Carritt and others split from an earlier convoy planned by so-called “Yellow Vest” protesters – a ragtag far-right group loosely united against Muslims, immigration, environmental policies and the United Nations.

According to a GoFundMe page created under a URL that reads “Yellow Vest official convoy to Ottawa 2019,” Carritt has already raised over $140,000 “for fuel and incidentals for vehicles travelling to Ottawa as well as meeting places at various stops on the route.”

Most of the money has been raised since the convoy left Alberta, helped in part by  national media exposure through major outlets like CBC News and CTV News.

Glenn says she can’t understand why Carritt “still has the GoFundMe open,” since she’s heard from convoy participants who say they have not yet seen a penny.

“I totally feel misled by what he’s doing … It seems really shady to me and I’m not okay with it. He needs to be transparent.”

United We Roll is definitely more than a pro-pipeline rally. Second most salient theme at is anti-United Nations #cdnpoli pic.twitter.com/De29zbzmwA

Carritt admits “this is my first time doing this” and concedes he spent the last two months “fighting other organizations” rather than “spending my time that I should have been doing completing all logistics.”

But he dismisses stories about struggling convoy members as “Facebook rumours,” insisting he has been putting “$6,000 a night on hotel rooms on my own credit card.”

“I told them right from the start, we said keep receipts,” Carritt said. “Everybody is going to be reimbursed for any fuel along the way.”

Glenn says she doesn’t buy Carritt’s story and supplied PressProgress with messages she said shows Carritt was slow to return $40,000 in crowdfunding from a separate GoFundMe campaign a month earlier.

Glenn alleges members of a Yellow Vest Facebook group had been raising money for a different convoy to Ottawa, but Carritt “took everything and ran with it.”

CJ Clayton, another Yellow Vest organizer, told PressProgress his lawyer had sent a letter to Carritt about the $40,000. He said Carritt was given the option of returning the GoFundMe money or use it for fuel for the convoy, but without explanation he declined to use the money for the convoy.

Glenn recalled that when they tried “calling him out on his bullshit and asking him what was going on” Carritt told them “that we’re not people in the real world, we’re just in Facebook land and that we don’t matter,” then stopped responding.

“Mr. Clayton told me to keep the money and use it for the convoy but now he’s creating some controversy because we were successful,” Carritt told PressProgress.

Carritt explained the money was “held in escrow,” but “now we’ve decided, just recently, because of a third party decision, to send that money back to Mr. Clayton.”

Minutes after Carritt was contacted by PressProgress, Clayton said Carritt messaged him agreeing to return the money. The $40,000 will be donated to a veterans’ group. 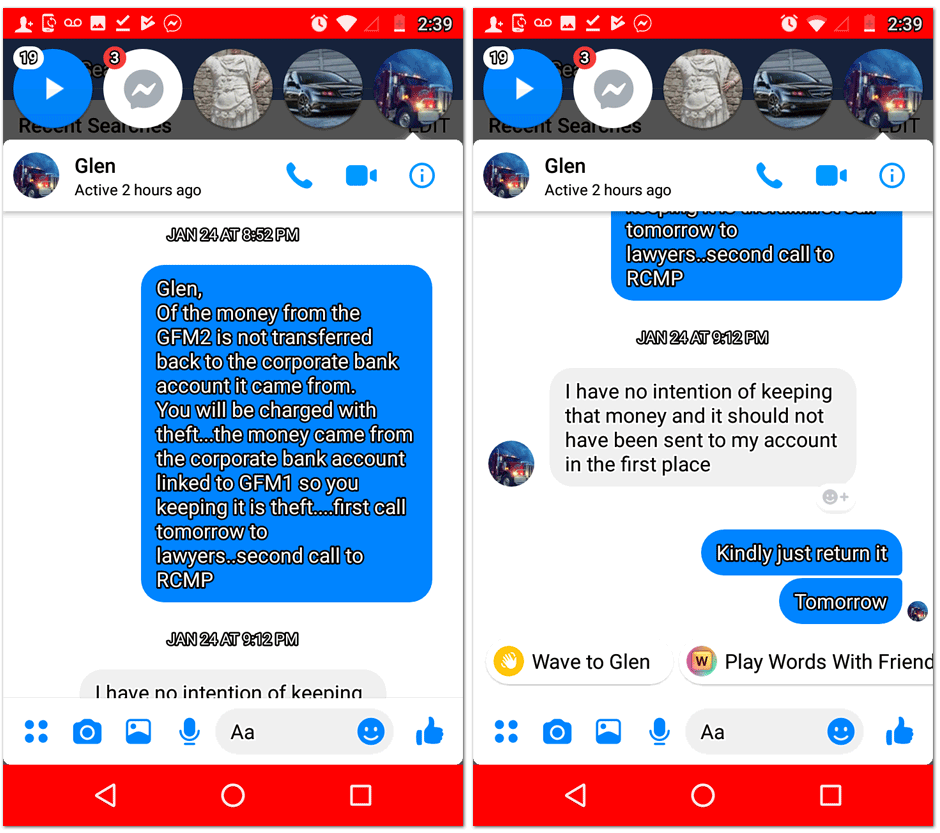 One convoy member, Cathy Monteath, accused Carritt of ignoring safety concerns after she was targeted with “death threats” by followers of the convoy on Facebook.

“I was told that I should be hung on the Hill in front of my daughter,” Monteath said   as the convoy of big rigs and pick-ups idled in front of Parliament Hill.

“We now have one Canadian flag on the front of our truck and two on each side of the back window,” Monteath explained. “This way, I can easily get out of here if I need to sorta blend in.”

Calls for Prime Minister Justin Trudeau, Alberta Premier Rachel Notley, as well as environmentalists to be hung for treason are a common refrain among the far-right Yellow Vest protesters. At the event, Conservative Senator David Tkachuk made headlines telling the convoy to “roll over” their political opponents.

In a video posted on Facebook, Monteath said she received the threats after viewers of her livestream noticed her toddler was not buckled into a car seat as the convoy sped across Northern Ontario.

She acknowledged her “daughter was out of her car seat,” but said the convoy being on the road “12 hours a day” left few opportunities for the toddler to move around.

Monteath told PressProgress she was so shaken by the threats, she and her husband temporarily left the convoy in search of a “safe spot,” explaining that the transient character of the convoy left her fearing for her safety.

“I didn’t feel safe within,” she said. “I can’t keep my fingers on who’s all here anymore,” adding “there is no track record except for the people who signed up … when it comes down to it, I don’t know any of these people.”

Monteath says she raised concerns with Carritt about how the convoy was organized: “I told Glen Carritt several times ‘look, we need to some better organization, there’s changes that need to be done here’.”

“I basically got a slap in the face.”

“He doesn’t really like me because I’m a woman who stands up for what I believe in,” Monteath noted, adding “there’s a reason why I’ve been twenty-some years in the industry with a bunch of rig people.

Carritt did not condemn the death threats, but instead suggested “this person has been trying to sabotage the convoy from the start.”

“She brought her child on the trip,” Carritt said. “She got the death threats because people were upset she had her child outside of the car seat.”

“I can’t be responsible for people that aren’t following the laws,” he added.