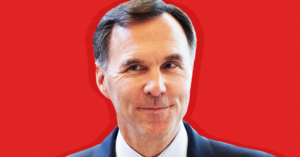 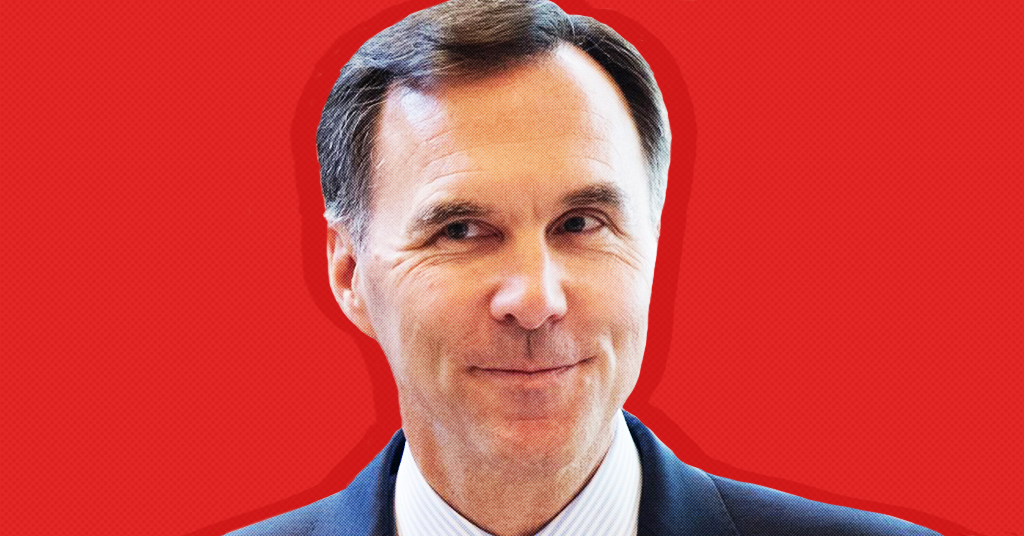 The Liberal government recently announced it had a deal for its first project through the Canada Infrastructure Bank and is looking at about a dozen more.

But concerns remain the CIB is there to subsidize profits for billionaires and leave average Canadians with privately-controlled and costly infrastructure.

What’s Been Pledged So Far?

Last week, the Canadian Press reported that in the Fall of 2018, officials with the Canada Infrastructure Bank had over 120 meetings about 60 potential projects, some of which were solicited by the private sector.

That follows the government pledging $35 billion federal dollars and setting up a full board of almost entirely private sector investors.

And, there are signs money spent hasn’t yielded expected returns. On February 6, Engineering-News Record reported that, as national infrastructure spending rose 11% from 2015 to 2017 and launched as the feds set up the CIB to “to attract and funnel private-sector project dollars,” private spending on infrastructure fell 18%.

Though the article attributes much of this to regulatory burdens, it says the overall statistic could be improved “as the infrastructure bank makes good on a promise to leverage $26 billion in federal seed money into hundreds of billions in private capital.”

This was summed up by a National Post editorial titled “What has Trudeau’s Infrastructure Bank achieved? A recycled loan and millions in expenses.”

one of the primary functions of the bank is to provide “loan guarantees” to private investors, essentially protecting their return on investment and making the taxpayer entirely liable in situations where forecasts prove inaccurate, projects fail, or costs otherwise accrue above and beyond what was expected.

“One way to do that would be to take a higher risk stake in the bank, having more subordinate loans or providing more grants, or ensuring less competition or fewer rules so it gets its returns faster,” Toby Sanger, executive director of Canadians For Tax Fairness told PressProgress.

But, CIB president and CEO Pierre Lavallée told PressProgress “one of CIB’s key mandates is to ensure each project in which we invest is in the public interest. We execute that by utilizing the significant global expertise of our Investments team to assist project sponsors in determining the most efficient financing and risk allocation for each project.”

Who are these experts?

Who Runs The Infrastructure Bank?

The 2015 Liberal platform mentioned providing low-cost loans to lower levels of government to help them construct infrastructure, through an infrastructure bank. But, the platform was otherwise light on details.

Soon after the election, Whiteside notes, the government hired a Bank of America-Merryl Lynch investment banker to “assist with the design of a Canadian Infrastructure Bank (CIB) and advise the infrastructure minister along the way (pro bono).”

Throughout that time, a Campaign For Accountability report notes, ministers met representatives of big banks involved in opening up infrastructure to investors. For example, in January 2016, Trudeau met with BlackRock CEO Larry Fink in Davos, at a breakfast organized by McKinsey and Company’s global managing partner Dominic Barton.

During that time, the CFA report notes, Fink was urging governments to spend more on infrastructure and expanding BlackRock’s infrastructure investments. Trudeau met with Fink again on March 16, 2016 in New York.

BlackRock did not respond to a request for comment from PressProgress.

Daniel Stevens, executive director of the Campaign For Accountability, told  PressProgress “big multinational companies push their agenda to governments that’s nothing new but the influence they have in Canada is a little unusual. Where the company hires (government) officials and the government hires company officials.”

The advisory council published its first report calling for the creation of an infrastructure bank that could recruit international investors for the development of toll highways, bridges, high-speed rail and power transmission projects.

Soon after,  Morneau announced a roughly similar plan for the CIB.

CBC News reported that on Nov. 14, 2016, Trudeau and members of cabinet notably attended a closed-door summit of top investors at Toronto’s Shangri-La Hotel, organized by BlackRock. There,  according to The Globe and Mail, Trudeau could “make a compelling pitch on why investors could choose Canada.”

The meeting was denounced by the opposition who said Trudeau gave the investors “extraordinary control” over the infrastructure bank. 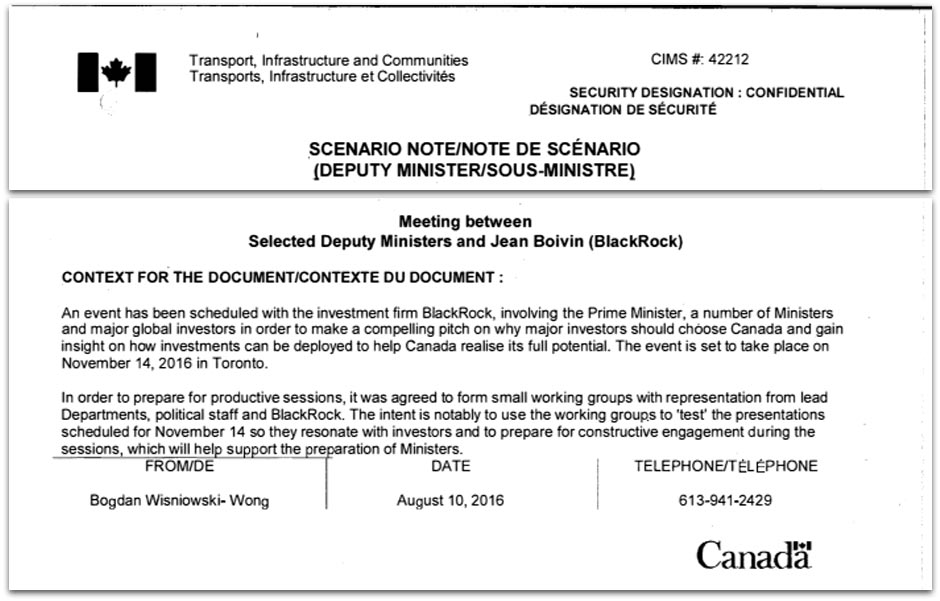 As well, Jim Leech the CIB’s special adviser,  appointed in 2017, was the CEO of the Ontario Teacher’s Pension Plan when it invested in, among other things, privatized water utilities in Chile, the Council of Canadians noted.

Reynolds told PressProgress, “the creation of the plan didn’t come from public services it came from contracted out reports on the committee.”

CUPE researcher Chris Ramsay told PressProgress much of the structure of the bank likely “comes from Morneau and his advisory council who said ‘we want the same investment opportunities in Canada that we get abroad’.”

When the board of the CIB was unveiled, Sanger notes “it was full of Bay Street investor-types and pension investment board people.” Likewise, the Council of Canadians noted the board is heavily skewed towards supporters of P3s.

Lavallée, however, said, “the bank’s management reports to an independent board of directors.”

Here’s who is on the board:

Likewise, as PressProgress reported previously, more than half of the board members have ties to the Liberal Party of Canada.

“The question I have is ‘is there a single person on that board who is there to present a skeptical voice?’ I am willing to bet there is no one who plays that role,” Reynolds said.

Sanger noted, that isn’t how partnering with the private sector typically works.

“With a normal P3, each of them gets established as a Special Purpose Vehicle (SPV) where companies come in, they bring something different to the table — finance, maintenance, construction, law, etc– and they tend to put 10-15% equity in. The rest is bonds,” Sanger said. “So, if the thing goes belly-up, they only have 15% equity at risk and the rest — the bonds — stay with the SPV.”

Likewise, a 2017 report by the Public Sector Accounting Board noted that:

because virtually all P3 projects are developed and operated through Special Purpose Vehicle (SPV) corporate structures, with limited liability and relatively minor equity stakes, the ultimate risks for ensuring the infrastructure and associated public services continue to operate always remains with the public entity.

Sanger continued “they’ll justify it by saying ‘oh but you’re transferring risk’ well, you’re not if they’re only 15% exposed.”

Asked if the CIB is looking to use SPVs to fund infrastructure projects, Lavallée replied “it is up to project sponsors and eventually private sector partners to have the appropriate structure to meet their obligations on any project.”

“For projects where equity and bonds are utilized, the specific targeted ratio will depend on many project-specific variables,” Lavallée said.

CUPE researcher Mathieu Vick told PressProgress that to repay support to investors, the REM line may very well need to raise fares up to 20%. Especially, he said, since the project’s expense have risen.

“Private infrastructure costs more money down the line, either through user fees or interest payments or rent payments because the private interests have to make their money. The public loses at the end,” Vick said.

As PressProgress reportedly previously, when asked by a journalist if he would move against tolls and other user fees to pay back investors, Morneau refused to answer.

There is a real appetite among private and institutional investors to invest in new infrastructure projects with a reasonable risk-reward equation. In a bank project, we will co-invest alongside private investors, and potentially governments, during the construction phase of the project. When it is operational, users will fund the bulk of the operations and of the returns to investors through user-fees and other revenue mechanisms.

Profits For A Few, Losses For The Public

As PressProgress reported previously, the CIB is looking to provide a 7-9% return on investment for its infrastructure projects. As Michael Sabia noted in a speech to the Toronto Region Board of Trade, that is not easy to come by.

Sanger noted for a 2017 study by the Canadian Centre for Policy Alternatives that the CIB anticipated $140 billion in private investment. Over the expected 30-year lifespan a 7.5 per cent ROI would cost $212 billion in addition to the principle repayment of $140 billion.

That’s around $4,000 extra, per Canadian to please the private investors, the CCPA noted. 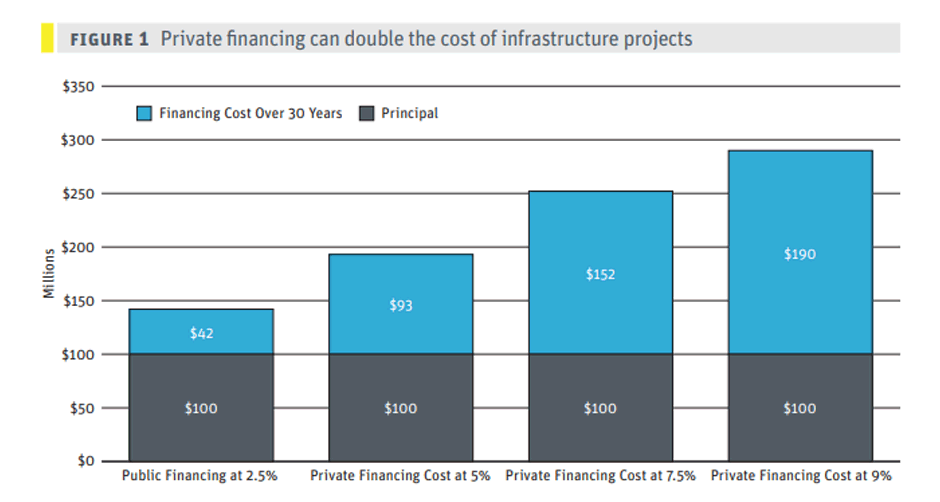 Where would that money come from?

“These p3s end up being tens of millions of dollars more expensive over a long period and where does that money come from? It comes from tax revenue, user fees and cost-cutting within the scope of projects,” Ramsay said.