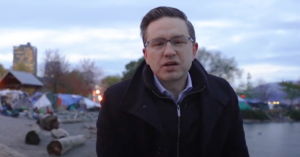 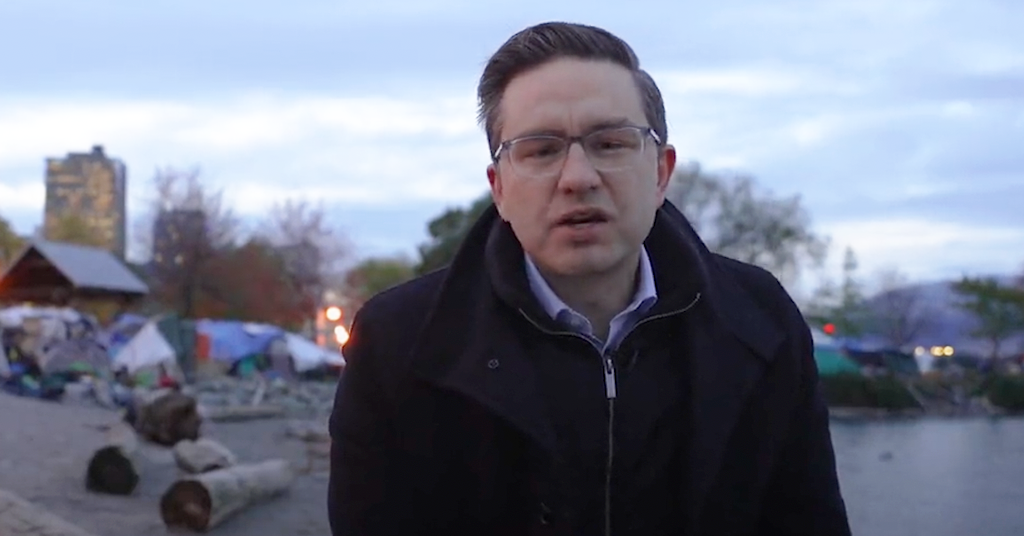 Conservative Leader Pierre Poilievre is facing scrutiny for claims made in a video that includes misinformation about the drug toxicity and overdose crisis in BC.

Earlier this week, Poilievre shared a video on Twitter that used a homeless encampment in Vancouver as a backdrop while he spoke about the ongoing drug toxicity and overdose crisis that has claimed over 10,500 lives in the province.

The video follows a common far-right talking point that shames or vilifies the homeless and those who use drugs as a justification for “law and order.” It includes a montage of tents, people slumped over on the ground and needles strewn on the streets, interspersed with clips of Poilievre doing a walk-through of the Downtown Eastside.

Poilievre goes on to describe addictions in the community a “result of a failed experiment.”

“Do you ever feel like everything is broken in Canada?” Poilievre asks. “This is a deliberate policy by woke Liberal and NDP governments to provide taxpayer funded drugs, to flood our streets with easy access to these poisons..

“We’ve not only had this 300% increase in overdose deaths in BC but a 32% increase in violent crime across Canada.”

However, contrary to Poilievre’s claim of “easy access” to drugs, prescribed safe supply is not readily available across the province.

BC’s prescribed safe supply program has been rolled out in a phased approach through a number of funded pilot studies in various parts of the province, although it has been criticized for not being more widely accessible.

The solution posited by Poilievre to the drug toxicity and overdose crisis also goes against what experts in the field say would yield the best outcomes.

“The three things he wanted to do are really like Richard Nixon’s war on drugs,” said Dr. Mark Tyndall, a professor and doctor in public health and infectious diseases and founder of MySafe Society.

Poilievre suggested that to combat the overdose crisis we must tighten up borders, arrest drug dealers, and force people into recovery.

Tyndall, who previously worked on the Downtown Eastside for 25 years, said that this is the “solution” that is already being used.

“Basically, that’s still what we do, outside of a few pilot programs and a few supervised injection sites, it’s still a war on drugs where drugs are illegal, people who use them are arrested, and we spend a lot of money cracking down on distribution and dealers, including Border Patrol,” Tyndall said.

Tyndall adds that when Poilievre calls safe supply a failed experiment he is off the mark, given that safe supply hasn’t really been implemented province-wide.

“We actually haven’t done it yet, but a lot of us have been advocating for that. But other than a few pilot studies it really hasn’t happened,” said Tyndall.

Tyndall said that doctors have actually decreased the amount that they prescribe to patients, which has contributed to many relying on the increasingly toxic illegal market.

Tyndall’s safe supply project, MySafe Society received a grant from Health Canada to put biometric opioid vending machines that give out hydromorphone in different parts of the province. They currently have four machines operating in BC.

“People can register and get on a machine and they don’t have to deal with pharmacists, and endless doctor’s appointments and prescriptions and things,” said Tyndall.

“The idea was that by now we would have had a lot of expansion to other places. But I’ve spent the last three years just kind of battling with the bureaucracy.”

He said that despite the lip service that the provincial government has paid towards safe supply, not enough resources have actually been set aside to make it into a reality.

“Although our provincial government will go on record saying they support safe supply, they have not, with any resources.”

“All the safe supply programs that are currently operational in Canada, are Health Canada, and the province has, I think, been quite missing in action in this whole thing.”

Tyndall also cautioned against the rhetoric posited by Poilievre, that tries to insinuate that tent cities are inherently associated with drug use and addictions, when data has repeatedly shown that people who use drugs come from all walks of life, and often die alone.

The BC Coroners Service found that from 2017-2021, 65% of illicit drug toxicity deaths occurred in private residences, while only 12% were homeless.

In addition, in November, the BC Coroners Service found that “analysis of post-mortem toxicology results shows no indication that prescribed safe supply is contributing to illicit drug deaths regionally or provincially,”

“The focus is way too much on the drugs,” said Tyndall.

Tyndall notes that Poilievre’s video feeds into this rhetoric.

“We seem to be able to have empathy for somebody who’s homeless, and as soon as people find out that while they’re using drugs, that’s when they need to be punished,” said Tyndall.

“By approaching and kind of blaming the victims and taking pictures of people, lying around on the streets and in tents and stuff, I find it very, very problematic and hurtful, that we’re treating people like this. These are the people that need our help, not our punishment and ridicule.”

On Wednesday, Health Canada announced $15 million in funding for 24 projects across the country towards harm reduction, treatment and access to safer supply programs.