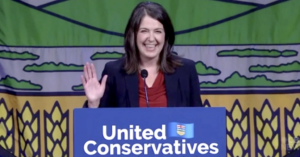 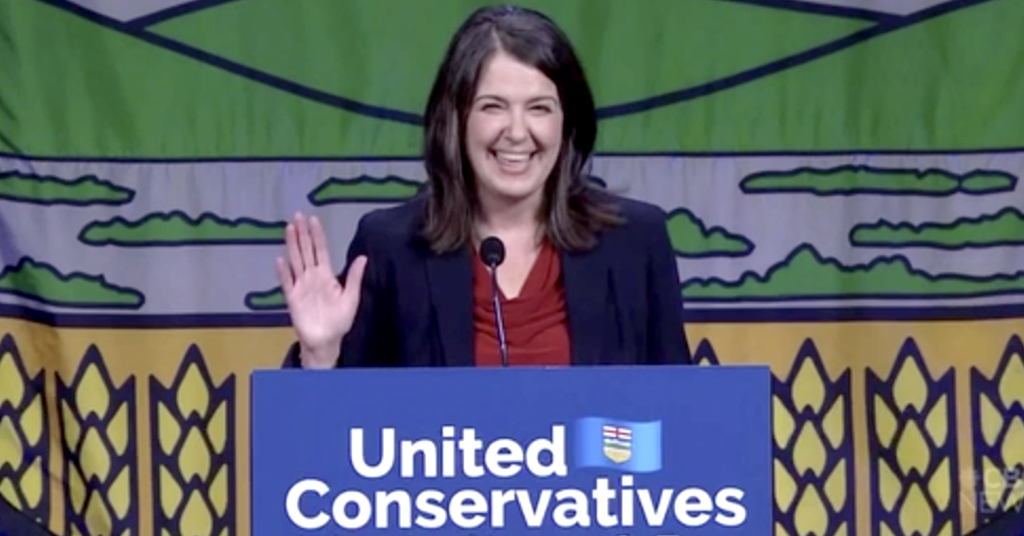 This article is more than 1 month old
Explainer

Danielle Smith has won the leadership of the United Conservative Party and will soon be sworn in as Premier of Alberta after securing the support of 53% of UCP members on a sixth ballot — or, roughly 0.9% of Alberta’s total population.

The new premier-designate does not currently have a seat in the legislature and Smith has stated she will not call an early election to secure a mandate from the public because she admits she might “lose.”

No one knows what will happen in the next few months as the former right-wing talk radio host, Fraser Institute policy wonk and Wildrose Party leader gets ready to replace Jason Kenney as Premier of Alberta.

We do know that Smith will move on her Alberta Sovereignty Act, legislation that would allow Alberta to ignore the constitution. Smith has said that this legislation will be her top priority, and she plans to table the bill before Albertans even have a chance to vote on it.

My colleagues pushed her on why no fall election, where she could secure a mandate from all Albertans, not just UCP members, to implement some of her bold reforms and ideas. Smith pointed to equalization referendum, fair deal panel, as support for sovereignty act #ableg

The proposed legislation has been criticized as “nonsensical” by legal scholars and the Globe and Mail’s editorial board has warned Smith will plunge Canada into a “constitutional crisis” if she follows through on her plan.

Lashing out at Ottawa is standard for Alberta conservatives, each of the leadership candidates did to varying degrees, but Smith’s Sovereignty Act took things much further than many of her UCP leadership rivals could stomach.

Even Jason Kenney denounced Smith’s plan as “risky, dangerous and half-baked,” predicting it would lead Alberta to become a “banana republic.”

So who is Smith, and how did she come to lead Alberta?

Smith’s political career goes back to the 90s in Calgary. Along the way are a few highlights and surprise twists that could give you an idea of what to expect from Alberta’s controversial new Premier.

Early days: From the Fraser Institute to the Calgary Herald

Smith began her career as a research intern at the right wing Fraser Institute in 1996, a Vancouver-based think tank that in the late 90’s took money from the tobacco lobby to downplay the health effects of cigarettes, and pushed climate change denialism.

From there, Smith landed a job as director of the Canadian Property Rights Research Institute, a conservative landowners group founded by farmers and ranchers, during which time she opposed endangered species protection and municipal anti-smoking bylaws.

In 1998 she was elected trustee with the Calgary Board of Education, where she advocated for school closures and clashed with other trustees. The board was so dysfunctional from infighting it was fired by the Provincial government in 1999, a decision that, according to CBE Board Chair Theresa Woo-Paw, represented “a failure of adults to act in an adult manner.”

Smith then went on to scab at the Calgary Herald during the 1999-2000 strike. During her time at the newspaper, she claimed smoking cigarettes had health benefits, citing a book funded by Big Tobacco.

The well known figure in Alberta has been full of surprises since.

As leader of the Wildrose Party, Smith nearly became Premier in 2012. Polls showed a likely victory for her party against the governing Progressive Conservatives when, a week before election night, a blog post from one of her Edmonton candidates Alan Hunsberger, stated gays would “suffer the rest of eternity in a lake of fire, hell, a place of eternal suffering.”

Smith refused to condemn the remarks, and the WRP went from projected winner to only picking up 17 seats on election night.

Crossing the floor and joining the Progressive Conservatives

In 2014, Smith nearly destroyed the Wildrose Party when she led a surprise last-minute floor crossing with 8 other MLAs to join the governing Progressive Conservatives, reducing the official opposition to five MLAs.

It didn’t go well for her, and Smith lost her seat in 2015, seemingly ending her career in politics.

Soon after she began a career in talk radio that ended abruptly last year. During the early days of the Covid 19 pandemic, she notably spread misinformation when she claimed “hydroxychloroquine cures 100 per cent of coronavirus patients within six days of treatment,” in a tweet.

It was not a happy departure when Danielle Smith made a surprise announcement she was leaving the Corus Radio Network which had provided her a significant platform.

While Smith initially thanked Corus for giving her “so much editorial latitude,” she later claimed to be a victim of “the mob of political correctness” and insinuated she lost her job after criticizing Jason Kenney on-air.

Smith returned to her roots at the Fraser Institute the following year, hosting a short lived podcast. Smith was also named President of the Alberta Enterprise Group (AEG), a business lobby group.

According to Smith’s email newsletter, she was later “fired” from this job, explaining she was “asked to leave” after announcing her leadership bid on April 1, 2022.

An act aimed at allowing Alberta to ignore Federal laws has alarmed legal experts. Alberta’s Lt.-Gov. Salma Lakhani told reporters she’s willing to block it if it is found to be unconstitutional.

Smith is dismissive of the “so-called experts” opposing the act. They’re part of the problem, along with the “woke media.” Smith has used curious language suggesting Alberta must deal with the so-called “Ottawa Problem” and railed against the “global woke establishment” for standing in her way.

With a career that has seen a steady accumulation of enemies, perceived threats, and many twists and turns, you can expect her leadership of the province to be unpredictable and highly combative.