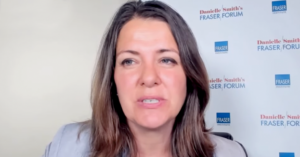 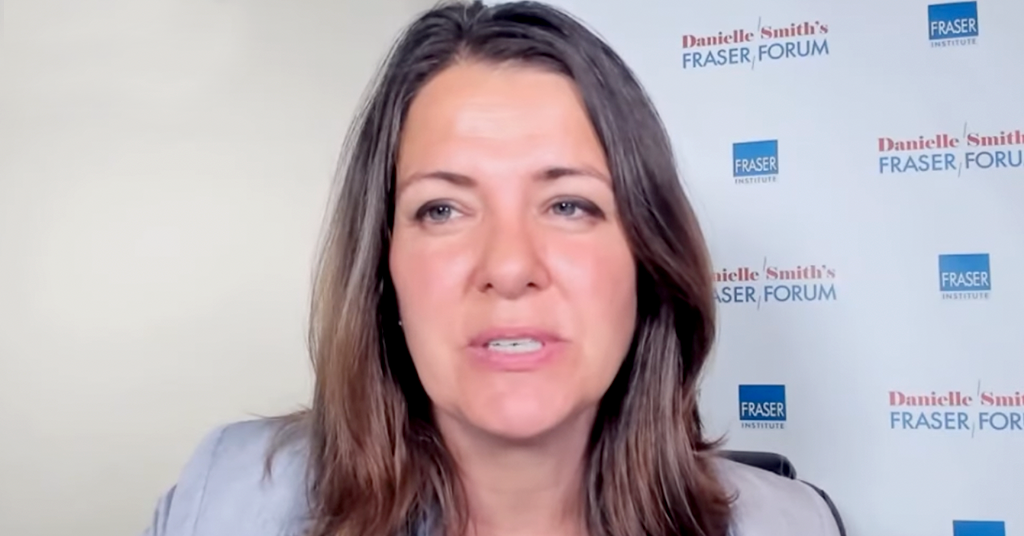 Danielle Smith argued in a video last year that inexperienced people who work jobs that require “no skills” should be paid at a lower minimum wage, pointing to her own past experience working at a bingo hall and McDonald’s as examples.

Last December, a few months before launching her bid to lead the United Conservative Party and become Alberta’s next premier, Smith argued some workers should be paid less than the current minimum wage during an episode of “Danielle Smith’s Fraser Forum,” a short-lived podcast hosted by a right-wing think tank called the Fraser Institute.

The episode, titled “Well-meaning and wrong-headed: The morality of the minimum wage in Canada and the US,” was released while she was President of the Alberta Enterprise Group, and a restaurant owner in High River, Alberta.

Joining her was Fraser Institute senior fellow Don Boudreaux, an advocate of insider trading and adjunct scholar for the right-wing Cato Institute based in Washington DC.

“I pushed around a cart at the bingo parlor selling pop and chips. That was my first minimum wage job,” Smith told Boudreaux. “And then I did McDonald’s.”

“‘Time to lean, there’s time to clean’, which stayed with me for life.”

“I’m very glad I had those first two jobs. But you know, maybe this is the problem is that the minimum wage is a blunt instrument to address the wrong problem,” Smith said, before suggesting similar workers should be paid lower wages.

“I have in the past done business advocacy, argued that there should be a separate minimum wage that is lower for someone who has no skills and are entering the workforce,” Smith said. “You can give them an opportunity to enter knowing that they’re going to be less productive than an employee that has been there for a couple of years.”

“There’s often a visceral reaction to that too from those who would argue against it, who say ‘well now, you’re just going to be exploiting young workers’, and I wonder if there’s something of merit to what I’m arguing?”

Smith’s campaign did not respond to a request for comment from PressProgress clarifying her remarks on minimum wages or what how she defines the difference between skilled and non-skilled jobs.

Later in the podcast, Smith’s guest drew his own distinction between workers “flipping burgers at McDonald’s” or “selling donuts at Tim Hortons” and doctors “performing neurosurgery,” noting employers can’t substitute skilled workers with “machines to perform those tasks.”

“Minimum wages affect mostly just low-skilled workers,” Boudreaux said. “The vast majority of workers have skills that make them so productive that they are worth to their employers more than the minimum wage.”

Gil McGowan, President of the Alberta Federation of Labour, said the discussion about minimum wage work in Smith’s Fraser Institute podcast is “insulting.”

“There’s no such thing as a low-skill job.” McGowan told PressProgress. “All jobs require some measure of effort, talent, time and attention, and all workers deserve a wage that allows them to live in dignity. That’s as true if you’re a dishwasher or a janitor as if you’re a doctor or an engineer.”

“Smith has been trying very hard to sell herself as a friend of the working-class, but with comments like these its clear she’s no friend of workers. It’s also clear the only freedom she’s concerned about is the freedom of employers to exploit low-wage workers.”

In the podcast, Smith went on to hypothesize that public sector unions were the cause for pressure to raise the minimum wage, to make it easier to advocate for higher wages for themselves during collective bargaining.

“We are a far more unionized workplace in Canada than I think you are in the United States,” Smith told Boudreaux. “I have this hypothesis that part of the pressure to increase minimum wages is that that assists collective bargaining because if you do a massive bump to the minimum wage, then the person who’s at the lowest end of the pay grid on a union pay scale can say, well, heck, if you’re gonna pay a dishwasher washer at a fast food Restaurant $15 an hour, my work is of higher value than that.”

“Therefore it causes the bump up to the wages all along the pay scale, because you often see that it is public sector unions who are really pushing for these wage increases, although there’d be very few government public sector jobs, I would think that would be paying at the low end of the scale.”

“Smith’s view of labour in these two quotes is naïve, counter-factual and appears to prioritize lowering labour costs to employers with little regard for the impact on the lives of low-wage workers,” Barnetson told PressProgress.

“A minimum wage is supposed to provide enough money to keep a worker fed and housed,” Barnetson added. “There are very few unionized workers who would benefit directly from a bump in the minimum wage.”

Barnetson noted that when the Alberta NDP raised the minimum wage in 2015, there was no correlation with growth in union wage scales, suggesting “Smith’s ‘indirect benefit’ hypothesis is incorrect.”