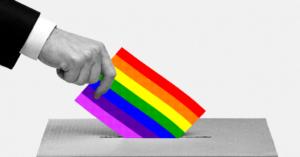 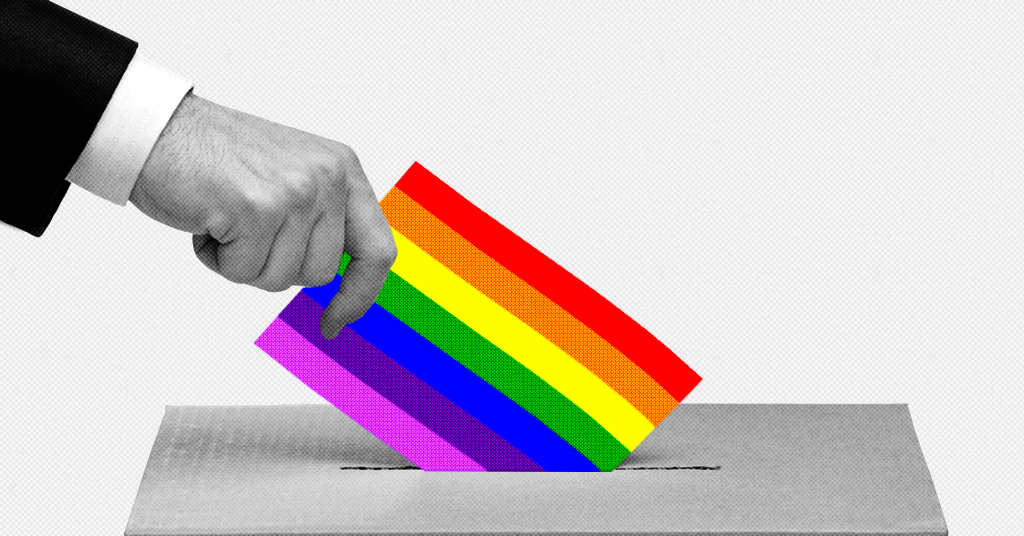 Voters in British Columbia just sent a clear and decisive message to a slate of candidates who ran on an anti-LGBTQ platform.

SOGI 123 is an educational program, designed to protect LGBTQ youth from homophobic and transphobic bullying, that has recently been a target for social conservative groups in the province.

In the end, less than a quarter of all anti-SOGI candidates endorsed by the hardline social conservative group Culture Guard managed to win a seat.

A week before local elections, Culture Guard and another social conservative group called Canadian Council for Faith and Family released a list of over 100 anti-SOGI candidates.

Some of the candidates endorsed by Culture Guard were not happy about it. A number of candidates, including the incumbent mayor of Abbotsford Henry Braun, were quick to denounce the group’s opposition to LGBTQ rights.

There are nearly 100 candidates for school board, council, mayor and park board on here being promoted by two anti-SOGI groups. Several sitting mayors are on the list. Mayors of Chilliwack, Abbotsford and Langley Township are also on a list by Culture Guard. @NEWS1130 #SOGI pic.twitter.com/Qy4kN5bxlF

Candidates who welcomed Culture Guard’s support did particularly poorly on election day. Surrey City Council candidate Nicholas Loberg, who said he was “honoured” to be endorsed by the social conservative group, finished in 37th place with 0.6% of the vote.

Culture Guard’s preferred candidates also failed to win a majority on any city council or school board anywhere in the province.

There are signs the group’s efforts only served to rally British Columbians to take a stronger stand on LGBTQ policies. After PressProgress reported on Burnaby school board candidate Laura-Lynn Tyler Thompson’s support for gay and transgender conversion therapy, 12 municipal candidates added their names to a letter calling for a provincial ban on the pseudoscientific practice.

The petition, launched by newly elected Victoria school trustee Ryan Painter, was signed by a number of mayoral, city council and school board candidates including  Kennedy Stewart, Vancouver’s mayor-elect.

Yesterday I learned that candidate for Mayor of Vancouver @kennedystewart signed on to our calling on the province to ban conversion therapy. @jjhorgan, I hope you’ll respond and ban this horrific practice. #SOGI123 #bcpoli #cdnpoli https://t.co/6XtDjtOPMV

Meanwhile, pro-SOGI candidates across BC retained or gained seats.

In Richmond, Ken Hamaguchi and Sandra Nixon, both supporters of the anti-bullying initiative, won the highest numbers of votes in their district, giving Richmond’s school board a strong pro-SOGI majority.

I’m a parent who is committed to defending every parent’s right to send their child to a school where they will be safe from bullying & discrimination, and accepted & respected for who they are. #DiversityandInclusion #SOGI #sd38 #rmdelxn

However, televangelist Laura-Lynn Tyler Thompson, who publicly campaigned with Culture Guard and recently called SOGI “a sex activist curriculum” (SOGI is actually not a curriculum, but an optional learning resource), finished third from last place in Burnaby, where she was running for trustee.

Announcing a rally in front of the Parliament Buildings in Victoria, British Columbia on April 23rd at 12 noon to protest the sex activist curriculum, SOGI 123, in… https://t.co/pxj8yOPlY2

Unfortunately, voters in Chilliwack re-elected anti-SOGI trustee Barry Neufeld, who peddles anti-Semitic conspiracy theories and misogynistic junk science – but on the bright side, they did deliver a majority to pro-SOGI trustees.

Incumbent trustee Dan Coulter, who last year spoke out in support of the anti-bullying initiative, topped the polls with 10,700 votes, joined by three pro-SOGI newcomers on the seven-member board.

Newly elected pro-SOGI trustee Willow Reichelt promised voters in Chilliwack that she would “work hard to make sure our schools are safe and inclusive for all students, parents and staff members.”

Thank you to everyone who voted for me for school trustee ❤️ I will work hard to make sure our schools are safe and inclusive for all students, parents and staff members.

The BC Liberal MLA for Chilliwack Laurie Throness, who spoke previously in support of both Neufeld and opposition to SOGI in general, called for “healing” and “gentle speech” between the opposing sides.

Sixth, a wise ancient proverb says: “There is one who speaks rashly like the thrusts of a sword, but the tongue of the wise brings healing.” It’s time for healing, for gentle speech; time to spend the next 4 years, not at war, but together crafting policy that works for everyone.

Humbled by the results, Neufeld also appears to be trying out a gentler tone.

In a Facebook post addressing “those persons who currently identify as Lesbian, Gay, Transgender, Queer, Two Spirited or whatever,” Neufeld stressed they have “nothing to fear from me or my colleagues,” adding: “WE DO NOT HATE YOU!”

“We understand that that the ideology of gender fluidity is comforting to you when you suffer from so much cognitive dissonance,” Neufeld continued, adding he understands “you are losing your mind.”

“We actually love you,” Neufeld said, “but love must be tempered with truth.”

Neufeld concluded by asking his LGBTQ constituents to carefully read the “waiver forms” and think twice before “making irreversible decisions that you may regret for the rest of your life.” 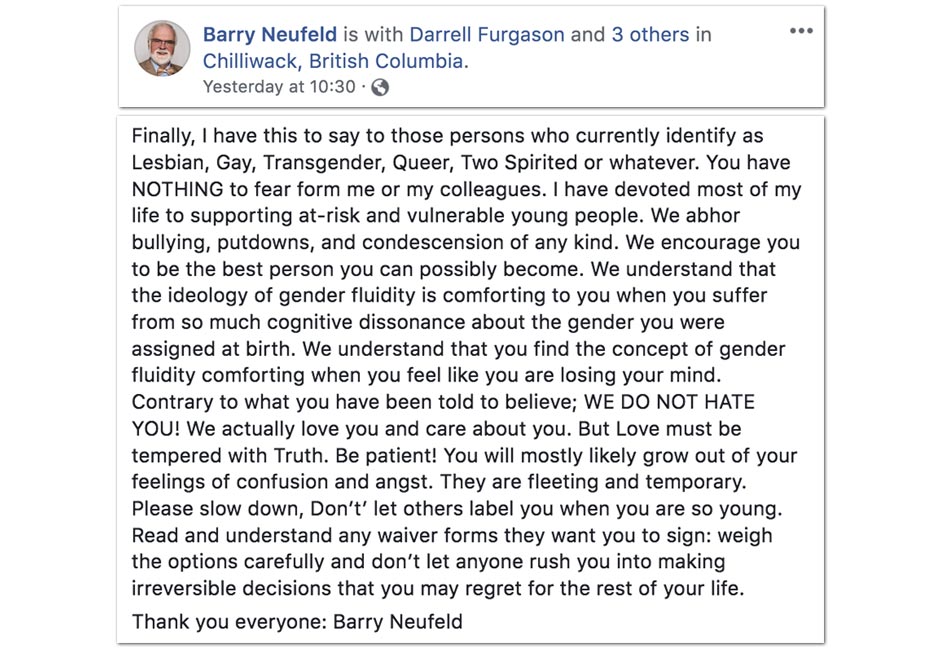