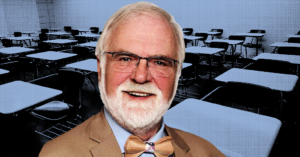 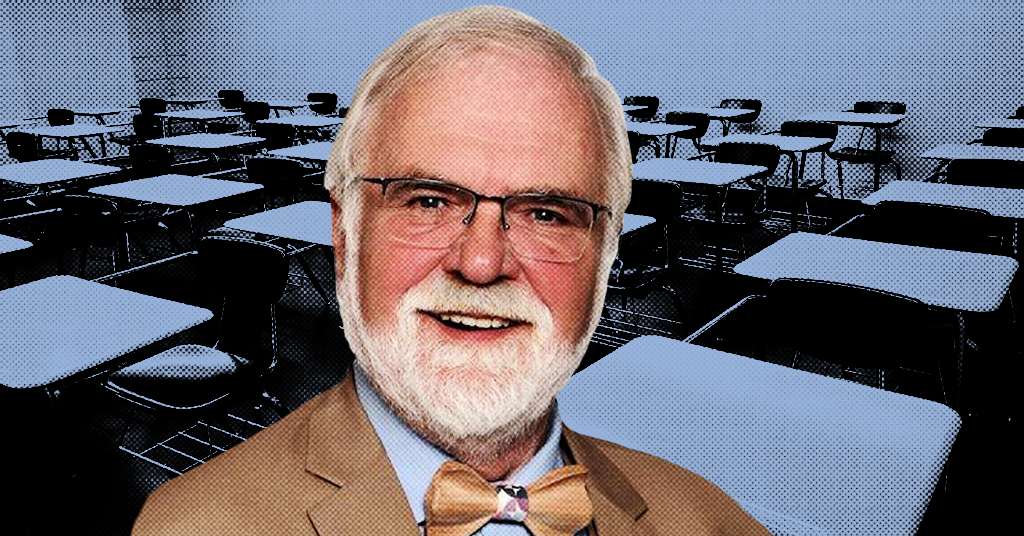 This Man is Probably The Worst School Trustee in British Columbia

If you ever needed a good reason to look into who the candidates for your local school board are, look no further than Barry Neufeld.

Neufeld is a three-term school district trustee in Chilliwack, BC who is currently running for re-election despite strong opposition from Chilliwack parents who say he doesn’t represent the values of their community.

Neufeld is running as part of a campaign to repeal British Columbia’s SOGI 123 initiative, an initiative aimed at protecting young people from homophobic and transphobic bullying.

But he also has a penchant for other bizarre and controversial views on topics ranging from depressed women to anti-Semitic conspiracy theories.

Here’s a closer look at why Neufeld might just be the worst school board candidate in the entire province:

While serving as a Chilliwack school trustee, Neufeld shared an anti-Semitic article published by a far-right fringe blog called “Biblicism Institute” which blames Jews for various conflicts in Russia, from the 1917 communist revolution to the 2013 Ukrainian Euromaidan and Russian annexation of Crimea.

On Facebook, Neufeld said he found the outlandish theory “fascinating” but “disturbing.” While he thought it “certainly explains some things,” the trustee asked out loud – “is it Neo-Nazi?”

A quick scan of the same website reveals it also promotes articles claiming the Christian Church has been secretly taken over by Jews and claims the Titanic was deliberately sunk by John D. Rockefeller to discredit steam power.

Elsewhere on Facebook, the Chilliwack school trustee speculates Adolf Hitler, Chancellor of Nazi Germany, probably had an IQ “around or well above 140.”

In the bizarre posting, Neufeld claimed “several people” in Hitler’s inner-circle had “IQ values that was measured to or around 140,” therefore “it is reasonable to believe that he was at least as bright as them.”

Anyone who suggests otherwise? They’re just trying to “paint (Hitler) as stupid,” the school trustee said.

The Chilliwack school trustee also chipped in his two cents on the topic of women and mental health.

“One of the most underrated natural anti-depressants for women” is “male semen,” Neufeld wrote.

Neufeld shared a link to a discredited paper that suggested women who have unprotected sex are “happier” than those who don’t – this coming from the same man who called BC’s Sexual Orientation and Gender Identity curriculum “biologically absurd.”

Barry Neufeld thinks churches are part of the gay agenda

As he was “preparing for the election to the public board of education” last month, Neufeld complained many Christian churches are becoming inclusive spaces for members of the LGBTQ community, whom he refers to as “radical cultural nihilists.”

In a long Facebook rant, the Chilliwack trustee claimed Christian churches are under siege by an “evil agenda” and expressed concern about children being taught about “gay rainbow families.”

He also dismissed efforts by some churches to be more “tolerant and loving,” and said: “I’m afraid many of our churches have been infected with ‘Pink Christianity.’” 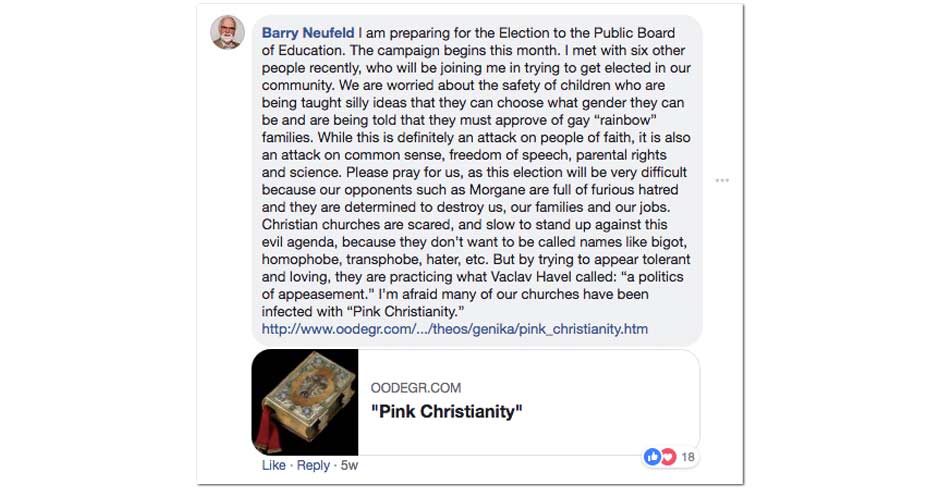 Barry Neufeld needs money to pay for his lawyers

Neufeld is also dealing with legal troubles — last year, the BC Teachers’ Federation filed a human rights complaint against Neufeld over his abusive homophobic and transphobic commentary that created an unsafe working environment for teachers and students, the BCTF alleges.

Neufeld had quoted pseudo-scientific findings from an anti-LGBTQ advocacy group to claim BC’s trans-inclusive school curriculum amounts to a “form of child abuse.”

In response to the lawsuit, Neufeld launched his own legal proceedings against the BCTF, claiming that the union publicly “defamed” his character by portraying him as someone consumed by “bigotry, intolerance and homophobia.”

Neufeld established a GoFundMe account to cover his legal bills, which is collecting money from private companies and anonymous donors. On his GoFundMe page, Neufeld links to a video of a panel featuring right-wing writers Barbara Kay, Lindsay Shepherd and Debra Soh that features Jordan Peterson ally Jared Brown describing Neufeld’s case as an example of “authoritarianism and compelled speech.”

By the way — Neufeld is running on a slate of school board candidates promoted by a group calling itself “Culture Guard” that opposes SOGI-123.

Both Neufeld and Thompson have appeared together at anti-SOGI rallies organized by Culture Guard.

British Columbians will cast votes in local elections on October 20.