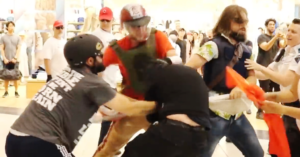 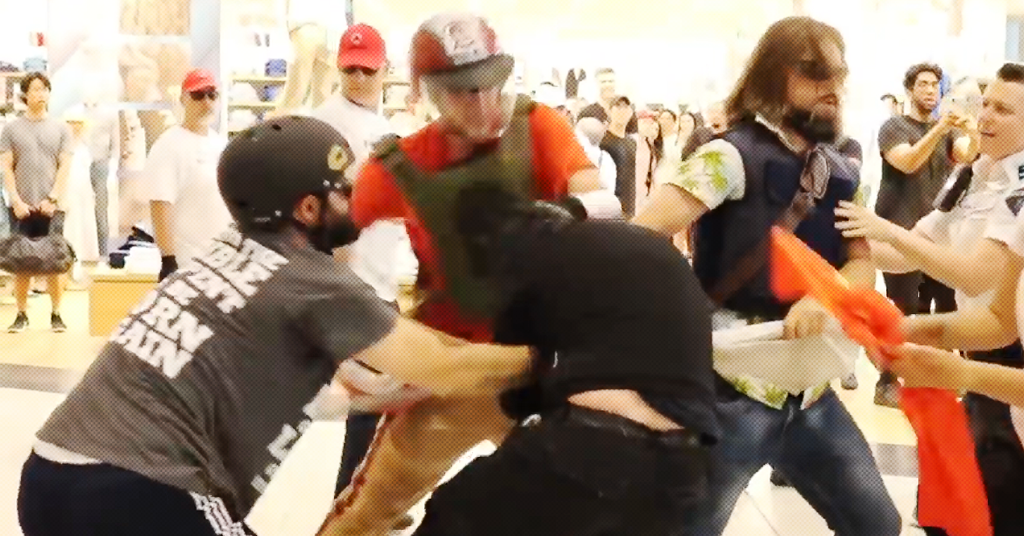 Saturday shoppers in Toronto watched in disbelief as a dozen members of far-right hate groups briefly transformed one of Canada’s most iconic malls into a surreal scene straight out of Fight Club this weekend.

The incident comes on the heels of similar violence only one weekend earlier at Hamilton’s Pride festival.

Things took a violent turn when some hate group members, a number of whom can be seen with helmets, body armour and weapons, swarmed their hecklers in front of shoppers at Nordstrom’s:

Another angle of the mall fight yesterday in Toronto after Pegida.

Vanderweide sucker punching someone, and the same person on the ground being kicked and hit by Radovicka, while Boswick screams “fuck him up” and “show us your face!” pic.twitter.com/F68cfSe7Z0

The hate group members had been participating in a “rally” planned to coincide with Toronto Pride that was organized by the anti-Muslim group Pegida Canada through its Facebook page, which counts 37,000 followers.

According to its website, the group’s name is based on a German term that translates into English as “Patriotic Europeans against the Islamization of the West.”

The event included demonstrations outside Queen’s Park and the Toronto Court House where the group’s leaders attempted to co-opt Pride as an excuse to rail against Muslims.

It hasn’t officially started yet but it sure seems like the PEGIDA crew isn’t doing much, has no coherent message, and are just here to… get yelled at by the counter protestors? pic.twitter.com/kpBa9ewkjV

Despite their alleged concern for Toronto’s LGBTQ community, one of the central agitators in Saturday’s events later declared that the “LGBT stands against us” in the struggle to resist purported attempts to impose Sharia Law on Canada.

Researchers who monitor hate groups told PressProgress the event attracted members of several well-known groups who made headlines in the past, including the anti-immigrant Northern Guard the white nationalist Canadian Nationalist Party and the far-right Yellow Vesters, Wolves of Odin and Proud Boys.

The videos, streamed by various hate group members through their Facebook feeds and YouTube channels, show them marching through downtown Toronto after their rally, occasionally stopping to yell anti-gay slurs at anti-fascist counter-protesters.

The videos also show Toronto police guiding the hate groups down the street as nervous pedestrians and parents with baby strollers and young children are seen darting out of the way and seeking shelter in the doorways of local businesses.

As the hate groups continued their march, video shows the group discuss hiding in the Eaton Centre to wait for reinforcements and one of the group’s leaders muse about starting a “big fight” inside the mall.

An Eaton Centre spokesperson confirmed its security team responded Saturday to an incident that began “outside the property” and “take the safety and security of our guests, tenants and employees very seriously.”

They added that the mall is “cooperating with the ongoing TPS investigation into this matter” and directed further questions to police.

A Toronto Police Services spokesperson told PressProgress police are aware of the incident and are currently investigating, but were not yet prepared to provide any further information.

But Canadian Anti-Hate Network Executive Director Evan Balgord argues Toronto Police need to send a stronger message, noting that in a vacuum of information, the muted response appears to be emboldening hate groups.

“The bad guys think the cops have their back,” Balgord told PressProgress. “They will keep beating the s–t out of people until the cops fix that impression.”

Balgord noted some of the individuals seen participating in the violent brawl inside the Eaton Centre were recently involved in another violent incident the previous weekend at Hamilton Pride.

Hate group members who attended both events appeared in a video bragging the police are “probably saluting and clapping and cheering for us all right now.”

Hate groups say police are “probably saluting and cheering for us all right now” after assaults at #Hamilton Pride. Fights started after a hate preacher sucker-punched an anti-fascist. @VestsCanada has compiled clips of the unprovoked assaults. Read more: https://t.co/hgDmYBkyPz pic.twitter.com/lUEBG6kmii

Balgord says the Canadian Anti-Hate Network has filed a “criminal complaint” against one of the hate group members: Chris Vanderweide.

“The video evidence clearly shows him committing unprovoked and vicious assaults,” Balgord said. “I understand he hospitalized somebody on Saturday — and that’s the police’s fault for not charging him already.”

“He should have already been arrested for assaulting several people in Hamilton the previous weekend.”

Video shows Vanderweide bragging about using a spare helmet as a “weapon.”