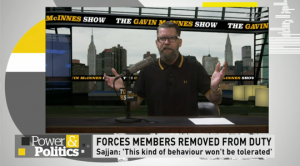 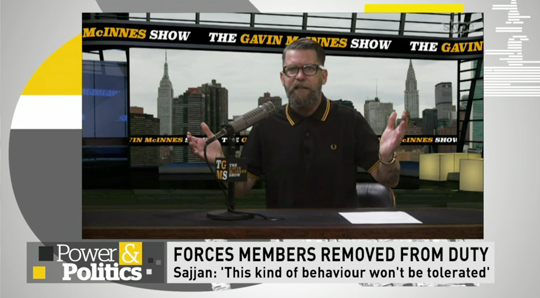 "Why give them this kind of platform?"

CBC News admits they “made mistakes” after the controversial leader of a group, described by the Southern Poverty Law Center as an “alt-right fight club” linked to riots and violent rallies, was given a platform on the public broadcaster to defend historical violence against Indigenous people and promote a website aimed at recruiting new members to his group.

The incident is also raising questions about whether or not traditional journalism in Canada knows how to handle the disruptive tactics of “alt-right” trolls – and whether or not Ottawa’s press gallery is dangerously out-of-touch with the concerns of marginalized groups targeted by hate groups.

On Wednesday, CBC’s Power & Politics waded into the ongoing controversy surrounding five men who belong to a controversial “alt-right” group, who call themselves the “Proud Boys,” who disrupted an Indigenous ceremony in Halifax on Canada Day by interviewing the group’s founder – Rebel Media host Gavin McInnes.

The five men who disrupted the Indigenous ceremony are also members of the Canadian Forces.

All five are now suspended from duty.

The leadership of the Canadian Forces has strongly condemned their actions. Rear Admiral John Newton apologized on behalf of the Navy, likening the incident to an attack on free speech while General Jonathan Vance, Canada’s top general, condemned the group and warned of “severe consequences.”

Despite condemnation from both Indigenous groups and the Canadian Forces, CBC’s Power & Politics invited McInnes on their show to defend actions that had already been condemned.

The interview with McInnes, who has previously bragged about lying to journalists and “making incendiary political statements” for “endless publicity,” was a complete disaster:

• McInnes characterized the incident as a couple of guys who “just walked into a park” and suggested the “confrontational” Indigenous group were the real troublemakers.

• McInnes defended the historic practice of issuing bounties on the scalps of the Mi’kmaw by British colonial forces.

• McInnes talked in circles, portraying the violent “alt-right” group as a “men’s club” just “like the Elk’s Lodge or the Knights of Columbus” without CBC News pointing out the group has been at the centre of riots and violent rallies in several American cities.

• McInnes was permitted to conduct his interview from the set of his online web show and promote an online petition – in other words, CBC News gave him free advertising.

@PnPCBC #shame u gave white supremacists airtime to spread lies & cause MORE harm & give NO time to Mi’kmaw. This srsly hurts ur credibilty

None of this should have been any surprise to CBC News, given McInnes’ well-documented track record:

• McInnes published a video of himself questioning key details of the holocaust and blamed jews for World War Two that was praised by neo-Nazis and a former Grand Wizard of the Ku Klux Klan.

• McInnes made headlines around the world after publishing a video titled “10 things I hate about Jews” on Rebel Media.

• McInnes recently defended a white supremacist who punched a woman in the face, telling Rebel Media owner Ezra Levant that “she got punched in the face because she was asking for it.”

• White nationalist leader Richard Spencer, who was filmed delivering a speech to a crowd that celebrated him with Nazi salutes, praised McInnes and Rebel Media for “pushing things in our direction” during an interview on the alt-right website.

Although CBC followed that interview by speaking with an expert on right-wing extremist groups, even CBC News’ peers were left scratching their heads.

Before and after the interview, Canadian journalists questioned the public broadcasters decision to give McInnes a virtually unfiltered platform to make inflammatory statements about Indigenous people and, of course, self-promotion:

Really CBC. You’re providing a forum to discuss both sides of whether a bounty on scalps was a good idea? https://t.co/xfT393ikzU

About 2 secs of research shows the Proud Boys are anti-Islam, anti-trans, misogynist, etc. Why have them represented on CBC? #pnpcbc

If guys in white robes disrupted an Indigenous event, would you have David Duke on to explain? After all, David Duke’s a Gavin McInnes fan. https://t.co/oKXK4mbQfc

This is downright shameful.

Why is our national broadcaster giving a platform to people who interrupted a vigil to murdered indig. women? pic.twitter.com/2jUVDmLVtF

You know, I really don’t think the CBC should be putting a person live on air if there’s a >15% chance they might say, e.g., the n-word. https://t.co/PuU0mGasE8

oh nice now the CBC has Gavin beamed into the atrium on a dozen screens. pic.twitter.com/0RUnQ0T960

Power and Politics is not pushing back nearly enough on Gavin McInnes’s bastardization of history.

Why would you do this? And go so soft on him, too?

Why give them this kind of platform? https://t.co/jGwVlKxl2x

Why is CBC giving airtime to guy behind Rebel’s “10 Things I hate about Jews” …to defend a group that also hates First Nations? Amazing

For the record: @HannahThibedeau and @PnPCBC interviewed a guy who wrote a list of why he hates Jews. Ponder that obscenity. @jmcguirecbc

“Coming up next on PnPCBC: we ‘ll be dropping a hornets nest full of angry hornets on the floor of our studio, you won’t want to miss it”

UPDATE: Following publication of this article, CBC News issued a statement to Canadaland admitting it had “erred in not providing details of Mr. McInnes’ published anti-Jewish sentiments” and added “nor did we adequately challenge him on some of his and the Proud Boys’ controversial views.”

CBC Power and Politics host Hannah Thibedeau also addressed the issue at the beginning of Thursday’s show, admitting “we made mistakes in our interview yesterday with the co-founder of the Proud Boys Gavin McInnes,” explaining they wanted to “learn more about that group” but noted they “could have also challenged him more on his controversial views.”