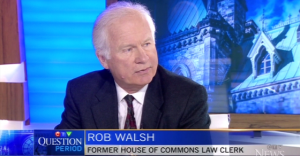 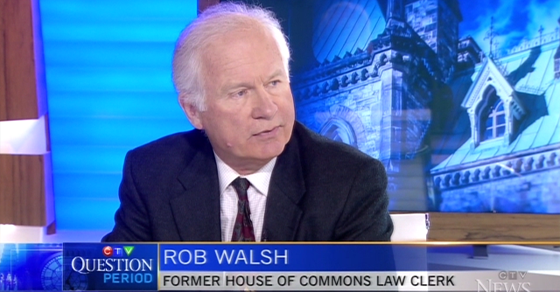 Retired House of Commons Law Clerk Rob Walsh is offering Canadians a salient and timely observation about three senators who set-up the review of their own expenses.

Those Senators are “incompetent,” said Walsh.

And as if sensing Canadians’ chins were collectively nodding in agreement, Walsh offered another good point in his interview Sunday on CTV Question Period with Bob Fife:

“It’s almost got to the point, Bob, where I think the Senate needs to be put into a trusteeship. I think the leadership doesn’t know how to manage its institution.”

Last week, word got out that three of Canada’s top senators had been been flagged by the Auditor General for improper expenses — on the Conservative side, Senate Speaker Leo Housakos and Government Leader Claude Carignan; on the Liberal side, Opposition Leader James Cowan.

Why is that a problem?

The trio just happened to take control of the committee responsible for responding to the audit “shortly after they would have been alerted to being flagged in the report” and set-up the arbitration process to adjudicate disputes over the AG’s findings.

And just a reminder: we are talking about the same Senate that launched a witch hunt on charities, passed a law demanding “transparency” from First Nations (it turns out they were fairly paid after all) and are now set to pass a similar law targeting unions (although one Senator did throw a temper tantrum when a prominent lawyer told him the Senate of Canada should take a look in the mirror).