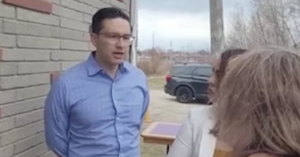 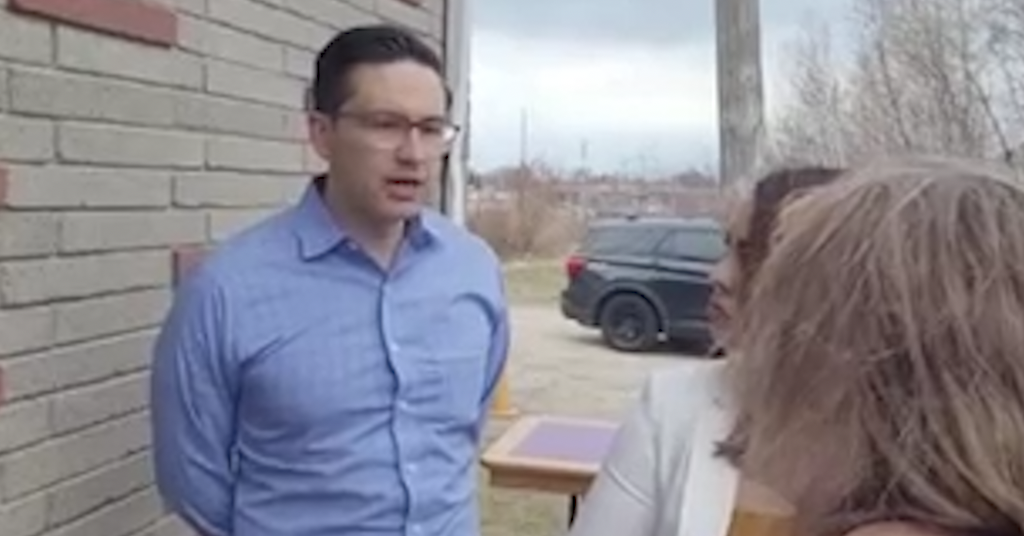 Pierre Poilievre is calling on Maxime Bernier, the leader of the People’s Party of Canada, to explain his ties to the World Economic Forum — an international organization at the centre of far-right conspiracies.

The Conservative leadership candidate was recently confronted at a campaign event by his own supporters who demanded Poilievre answer questions on topics ranging from vaccines to his relationship with Microsoft Windows creator Bill Gates.

“The other thing I’d like to know is how you feel about the World Health Organization being able to have control over what goes on here in Canada,” they state. “People who are not elected, who have no affiliation with us here in Canada, as well as the World Economic Forum, because as a Canadian, I don’t want them involved in our country.”

“Nor do I,” Poilievre replies. “I’m against the World Economic Forum.”

After informing the supporter he has long opposed the WEF, Poilievre calls on Maxime Bernier to explain his own ties to the World Economic Forum:

“Unlike Maxime Bernier, I’ve never been to the Davos conference that the World Economic Forum puts on. And he’ll have to explain why he went there and what he was doing there, but I did not go to that, and I would not go to it, nor will any of my ministers.”

The TikTok video has been viewed 170,000 times and has been shared in private groups run by anti-lockdown and Freedom Convoy organizers.

According to a 2008 Foreign Affairs and International Trade media release, Bernier attended Davos while he served as Canada’s minister of foreign affairs.

Bernier is quoted in the media release stating he would be joining “world economic and political leaders to hold informal and constructive discussions on global issues such as social development and economics.”

Poilievre is later interrupted by another supporter who questions him on his own links to the WEF. Poilievre’s spouse, Anaida Poilievre, is heard explaining that the reason her husband’s name appeared on the WEF’s website was because the WEF had re-published an article written by Poilievre.

Poilievre’s campaign did not respond to requests for comment from PressProgress.

Poilievre previously came under fire in 2020 after railing against the “Great Reset,” a non-binding initiative promoted by the WEF that now finds itself at the centre of a sprawling number of far-right conspiracies.

The WEF is a foundation that promotes “public-private cooperation” by convening political, business and civil society leaders. While the WEF broadly promotes policies friendly to big business , far-right conspiracy theorists have taken things further by falsely claiming it is planning a one world government.

Alberta UCP MLA Brian Jean recently posted a meme denouncing the WEF and “Great Reset,” prompting observations Jean was pandering to the far-right fringes of the UCP base in a bid to destabilize Jason Kenney’s leadership.

Poilievre’s focus on Bernier similarly appears to suggest the Conservative leadership candidate is elbowing in on the People Party leader’s turf.

Last month, Bernier issued a tweet admitting that he “went to Davos in 2008” while he was Canada’s foreign affairs minister, though he was careful to stress: “The PPC has nothing to do with the World Economic Forum and I totally reject their globalist ideology!”

Yes I went to Davos in 2008 as Canada’s foreign affairs minister to meet with ministers from other countries. But the PPC has nothing to do with the World Economic Forum and I totally reject their globalist ideology! pic.twitter.com/qd4sUnpkpI

Poilievre has also faced attacks from PPC supporters and would-be Conservative leadership candidates who have attempted to associate him with the WEF.

Joseph Bourgault, a Saskatchewan business owner whose campaign materials displays images of himself at the convoy occupation of Ottawa, has posted videos attacking Poilievre and the WEF.

At one event in Olds, Alberta, Fleury called Poilievre “the chosen one” and likened him to a “Trojan horse,” going on to suggest the WEF was preventing “fair elections” from being held in Canada.

“We are fighting communists,” Fleury said. “And when you fight them, they don’t fight fairly, they don’t follow the rules — nothing.”

In his remarks, Harper called “the World Economic Forum an indispensable part of the global conversation” and paid personal tribute to Schwab:

“I know everyone here joins me in thanking you for, in the service, really, of the common good, your leadership, and your vision.”