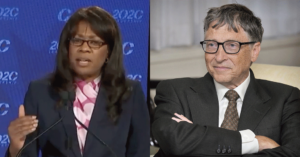 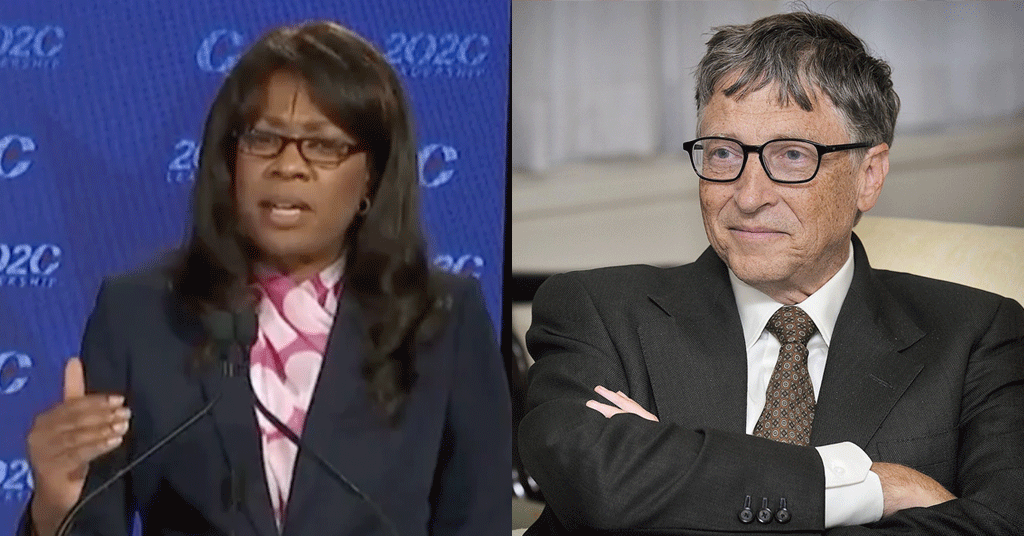 Last week, Lewis, a fan favourite of the party’s social conservative wing, issued a statement titled: “The WHO Pandemic Treaty and our Health Care Sovereignty.”

The page claims a new World Health Organization accord, which is modelled after a past international ‘tobacco control’ treaty, would dictate that “if a pandemic is declared, the WHO takes over the global health management of the pandemic.”

In the statement, the Conservative leadership candidate suggests Canada would be “surrendering” control over its own country to a global health body:

“Under this treaty, Canada would essentially be surrendering our national health sovereignty to the WHO when it comes to responding to pandemics.”

“We should also have serious reservations about the changing role of the WHO. The original goal was for sovereign nations to pool their resources to help combat malaria, Ebola, and other health issues largely harming those in the developing world. Instead, the focus has not only changed to include pandemic responses in sovereign nations like our own, but a major part of their funds now come from private donors, like the Gates Foundation.” 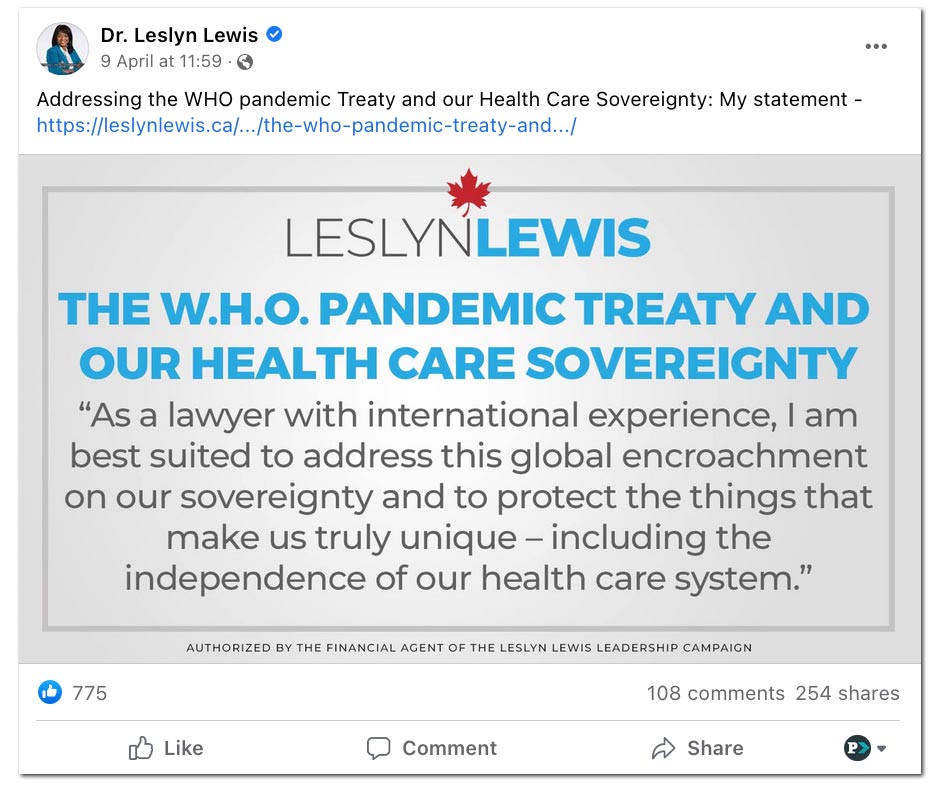 The statement includes an attached poll asking supporters for their names and email addresses, along with an opportunity to weigh in on whether they think “we should sign the treaty with the WHO” or if they think “we need to have control over our own health care system.”

Despite Lewis’ allegations, the current WHO proposal, for an accord on “on pandemic prevention, preparedness and response,” proposes multilateral cooperation on pandemic alerts and monitoring – and targets to increase the production of PPE and vaccines. It’s proposed to follow a previous accord on “tobacco control.” That accord, negotiated by WHO member countries, committed its signatories to take on measures to curb tobacco advertising and second hand smoke.

That said, as Lewis herself notes, the actual accord has not yet been “drafted.” No signatures are expected until 2024.

While Bill Gates and his foundation are not involved in the accord’s negotiations, Gates has lately become a convenient bogey man for anti-vaccine conspiracy theorists.

At the start of the pandemic, Canadian right-wing groups, such as the climate science denial group Friends of Science, shared conspiracy theories claiming the Microsoft founder “patented” COVID-19.

More recently, some online sources have alleged his foundation is secretly funding vaccine programs to microchip the population.

In 2020, Lewis shared a debunked story from a British tabloid claiming Bill Gates was developing technology to block the sun, a claim which fact-checkers later showed “misrepresented” a research project by Harvard scientists.

“We need the sun to continue the cycle of life on earth (photosynthesis),” Lewis said in a tweet addressed to the Microsoft Windows creator. “If blocked out by spraying sulphate particles in the sky it will reduce the earth’s capacity for plant growth, farming, and impact the world’s food supply chain.”

⁦@BillGates⁩ We need the sun to continue the cycle of life on earth (photosynthesis). If blocked out by spraying sulphate particles in the sky it will reduce the earth’s capacity for plant growth, farming, and impact the world’s food supply chain. https://t.co/9yq2RLypUH

In reality, the Gates Foundation keeps a list of its donations – while it has donated about $50 million to various WHO offices to fund polio eradication, that is unrelated to the accord and a small portion of the WHO’s $5.5 billion budget.

Lewis did not respond to questions from PressProgress inquiring further about why she thinks Bill Gates is involved in the accord.

However, Facebook comments from Lewis’ supporters, traffic heavily in conspiracy theory buzzwords – calling COVID-19 a “plandemic” and suggesting it would lead to the “enslavement of humanity.”

“This is such an important issue, and it will be a disaster for our country if we lose healthcare autonomy, and are controlled by the WHO which is incidentally, massively funded by Bill Gates who does not have our best interests at heart,” another Conservative supporter wrote.

Update: In an interview Thursday on CBC News Network’s Power and Politics, Conservative leadership candidate Leslyn Lewis responded to questions relating to her dubious warnings about Canada surrendering its sovereignty to a global organization — claims which were first reported by PressProgress.

Host Vassy Kapelos asked Lewis why she is “making an insinuation or an implication that Canada would give up its sovereignty to a global organization,” noting the claim is “part and parcel of bigger theories out there that are criticized as being conspiracy theories.”

In response, Lewis doubled-down on her claim, insisting “it is actually happening.”

“It is not a conspiracy,” the Conservative leadership candidate told Kapelos. “It is not a theory.”

This story has been updated to include Leslyn Lewis’ tweet addressed to Bill Gates asking the Microsoft Windows creator not to block sun.