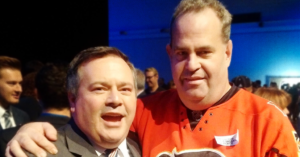 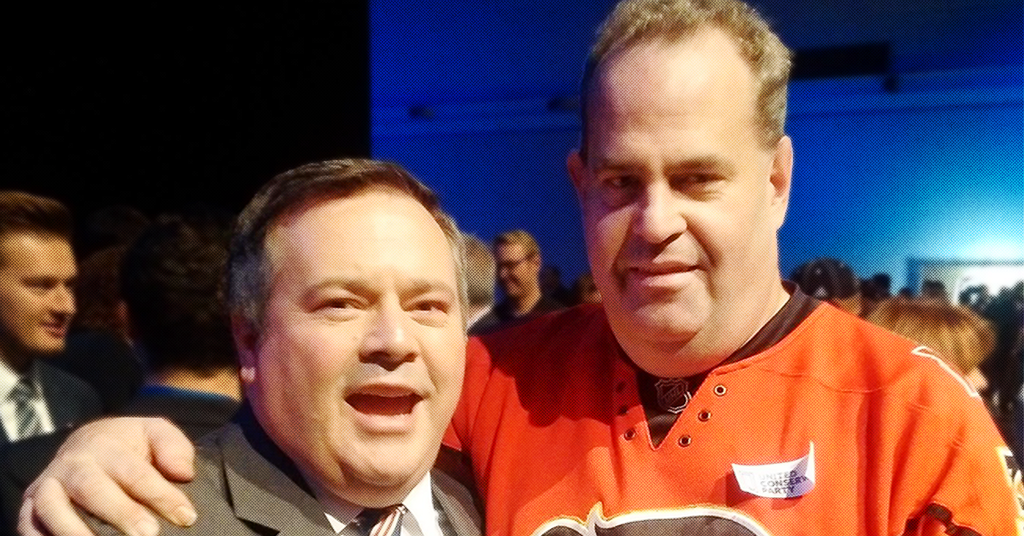 “For the record, I stand by what I said there and have never apologized and never will”

One of the top campaigners for Jason Kenney’s United Conservative Party says he stands by his claim that the Earls restaurant chain supports terrorists.

Craig Chandler, a well-known organizer and Kenney ally, revisited his controversial views on Earls while trolling an Edmonton-area radio station’s Facebook page over the weekend.

Chandler resigned in disgrace from the Alberta PC party executive two years ago after declaring that “Earls supports terrorists” because the restaurant chain happens to source beef from a supplier that also offers a line of halal products.

Now Chandler is back, organizing campaigns for a number of UCP candidates – and he wants everyone to know he doesn’t regret what he said about Earls.

In the comments section of a post on the Facebook page of Calgary’s 770 CHQR, Chandler accused Calgary broadcaster Angela Kokott, a nomination candidate for the centre-right Alberta Party, of having “no morals.”

In a bizarre exchange, the station’s official Facebook account came to the defence of its former employee (all comments signed “Joe”), sharing a link to a Calgary Herald article from 2016 that states “Craig Chandler has stepped down from the Progressive Conservative party’s board” after “accusing Earls restaurants on Facebook of supporting terrorism.”

Responding to the link in an ensuing comment, Chandler said:

“For the record, I stand by what I said there and have never apologized and never will.” 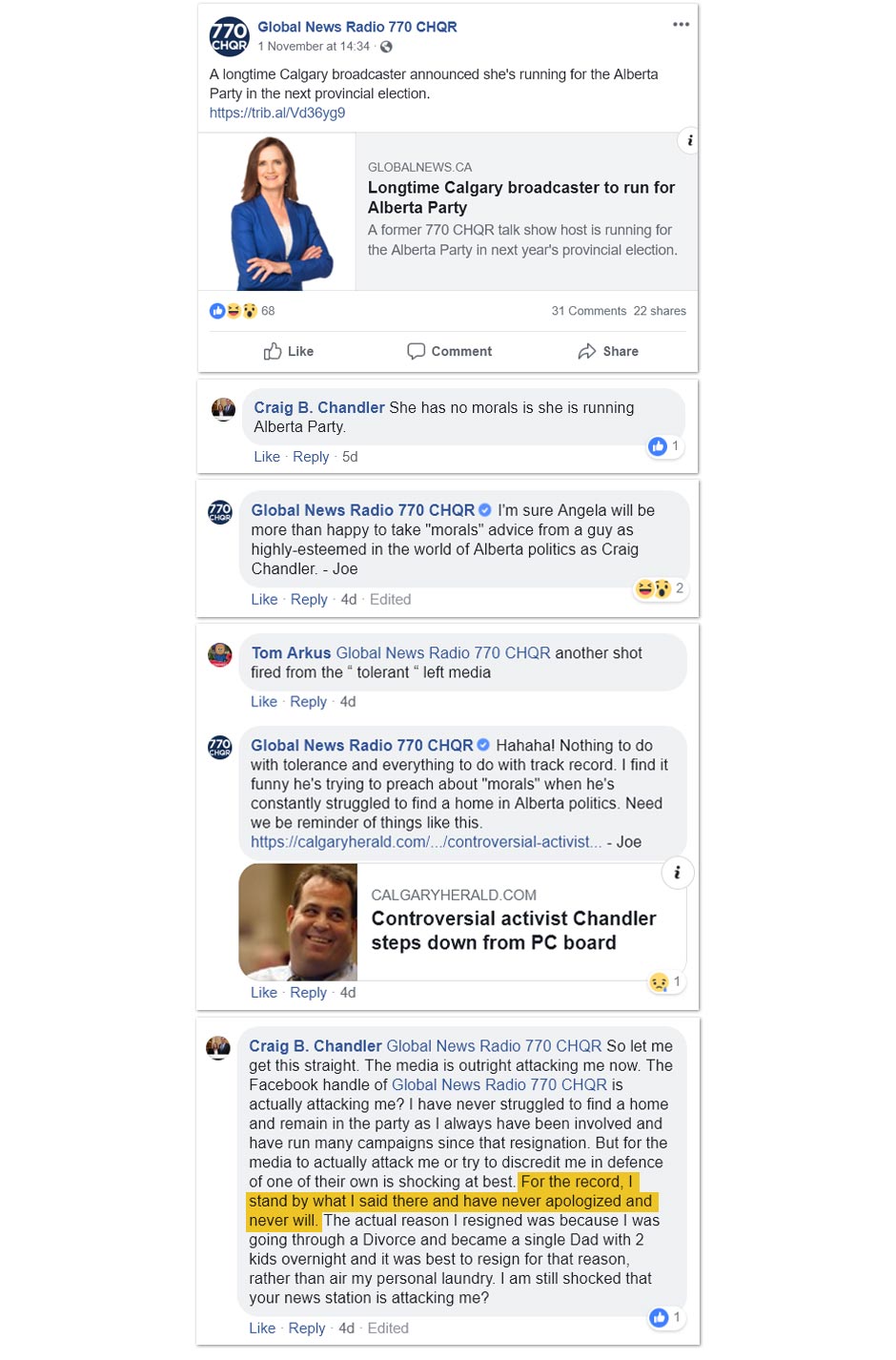 Chandler’s decision to reopen debate on Earls restaurants comes at the same time as UCP leader Jason Kenney is promising to purge “extremists” from the UCP.

Reacting to a PressProgress report on the infiltration of Kenney’s campaign by white supremacists, Kenney told reporters on Tuesday that he wants his party to “look into the dark corners of the internet” and create a database to screen out extremists from the party.

It’s unclear if Chandler’s track record would place him on Kenney’s watchlist.

In 2012, Chandler defended a Wildrose candidate’s homophobic “lake of fire” comment, noting that although his “wording” could have been more “Christlike,” it was still “biblically accurate.”

In 2007 he was forced to apologize as part of a Canadian Human Rights Commission settlement. On his radio show, Chandler stated that gay people are “sick, diseased or mentally ill” and claimed “God sees murder as equal to homosexuality.”

This wasn’t his only eruption that year. Chandler also told immigrants to Alberta they “must adapt to our rules and our voting patterns or leave,” adding: “Conservatism is our culture.”

In addition to running campaigns and assisting UCP nomination candidates, Chandler also enjoys the support of many UCP insiders and high-profile candidates.

Joining the several nomination candidates were a number of candidates for the UCP’s executive board, including Sonia Kont, Dale Bossart and Gord Elliott. 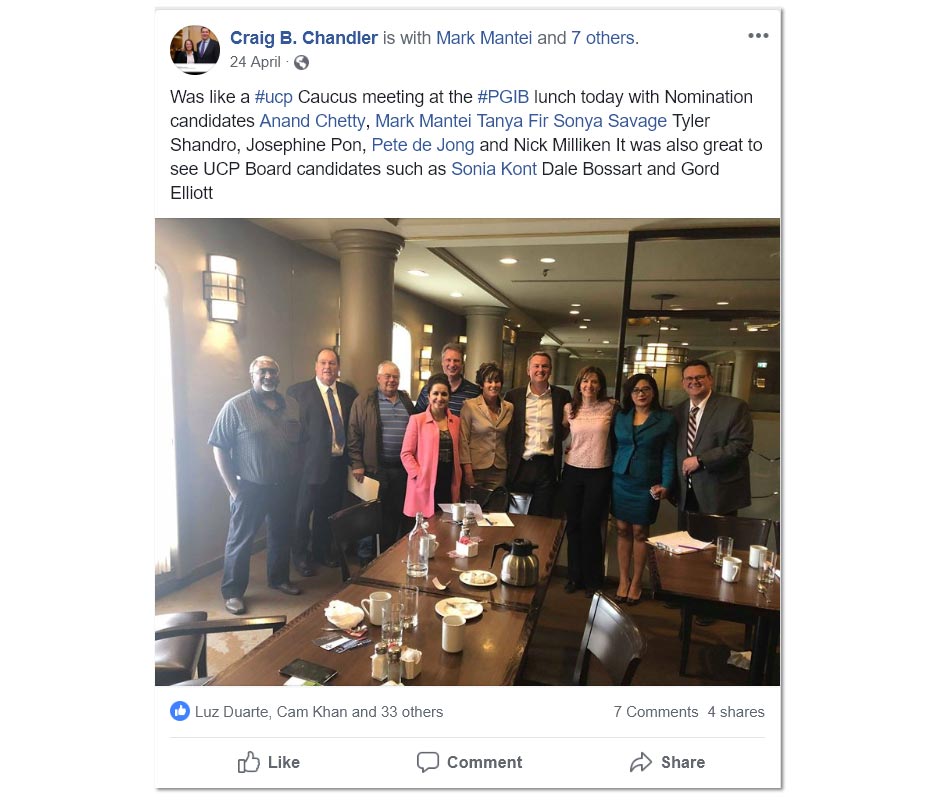 Kenney says his party will deal with members who hold “aberrant or extreme views” on a “case by case basis,” but cautions he might not catch them all.

“We’re not going to bat a thousand on this,” Kenney admits.

Correction: A previous version of this story identified 770 CHQR as an Edmonton-area radio station. In fact, the station is based in Calgary.