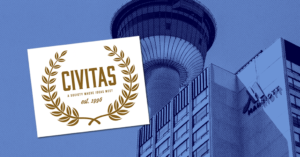 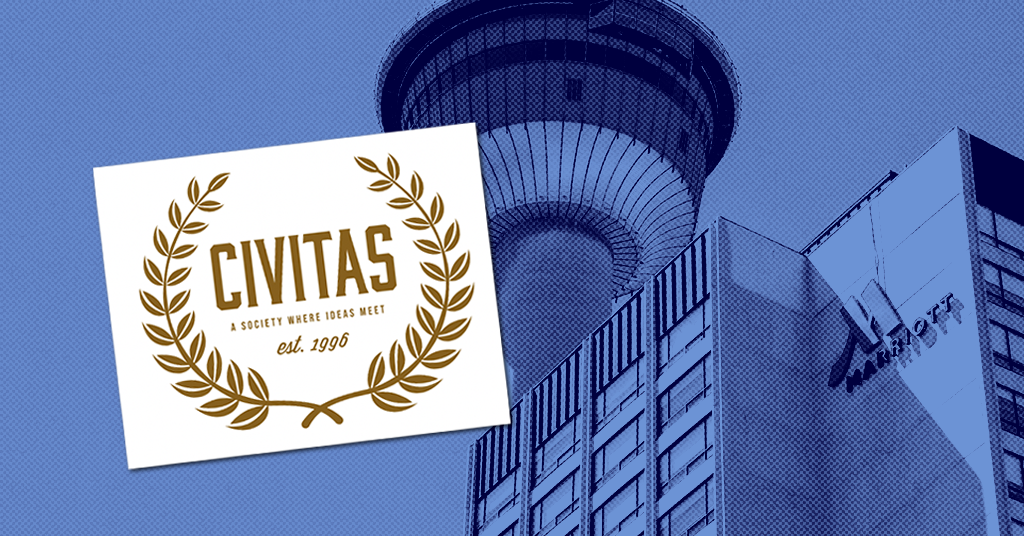 The annual conference is held under Chatham House rule, meaning “members are asked not to divulge one another’s identity publicly, or to share details of the conference program.”

“The identities of the participants are private and all discussions are not to be recorded, reported, attributed or disseminated in any fashion,” the program notes. “All members and guests are asked to respect Chatham House rule.” 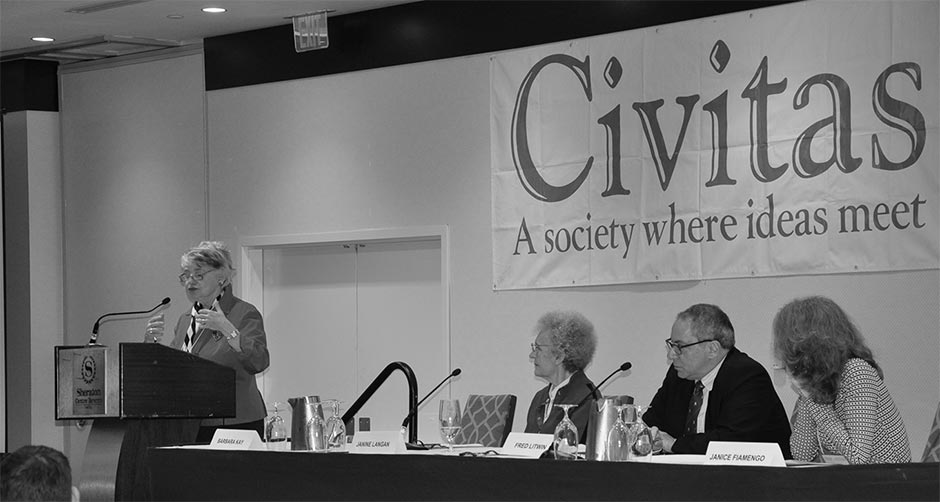 Barbara Kay speaking at a past Civitas conference (Civitas Canada)

Civitas Canada, formerly known as the Civitas Society, was founded as a high-brow social conservative forum to convene conversations about “one of the great challenges of Western civilization: How to reconcile our desire for individual freedom with the need for social order.”

Civitas was launched by William Gairdner, an anti-immigrant author who called for Canada to exercise “self defence” against “ethnic or cultural take-over,” far-right magazine publisher Ted Byfield, Macdonald-Laurier Institute founder Brian Lee Crowley and other social conservatives as an annual get together for Canada’s far-right pseudo-intellectuals.

“Civitas is an ideas society,” Malcolm told PressProgress. “That is why Civitas operates according to Chatham House rule, so that we can have these sorts of discussions without fear of censorious and malicious organizations like yours trying to smear us for the sin of exercising our most basic political rights.”

“We are disappointed with whomever shared our programme with your execrable organization.”

According to a copy of its program obtained by PressProgress, Civitas held its 2022 conference at the Downtown Calgary Marriott between April 29 and May 1. 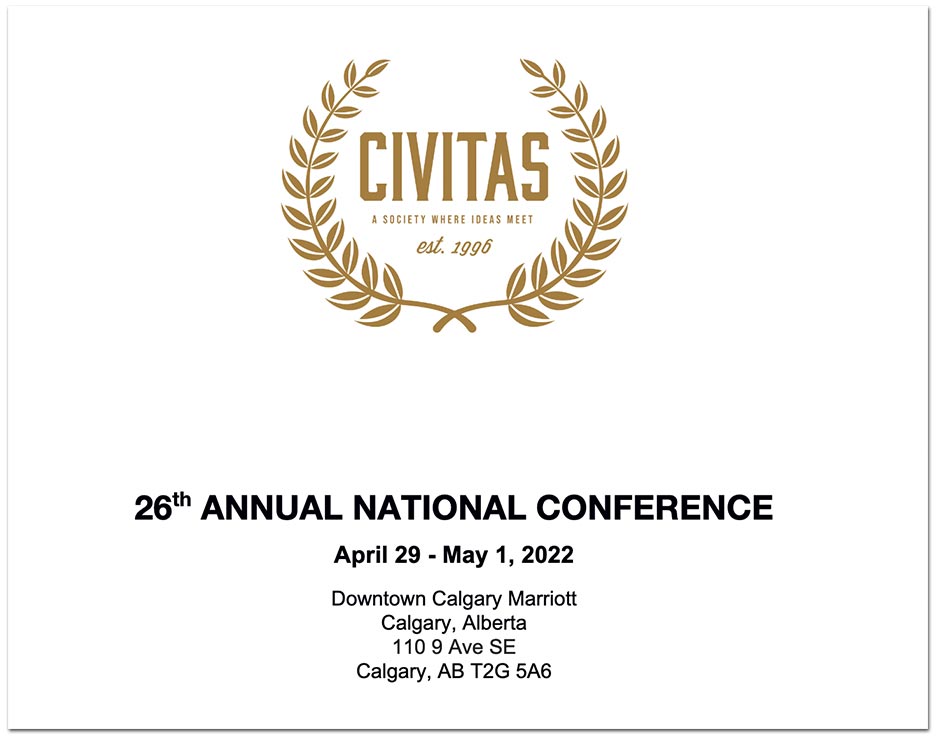 The line-up included panels titled “Gender, Biology and the Woke Revolution,” “How to make Canada the Most Pro-Family Country in the World” and “The Abject Failure of our Institutions in the Covid Era,” which is listed as moderated by UCP leadership candidate Danielle Smith.

Earlier in the day, the afternoon bill featured a panel titled “Indian residential schools and the issue of ‘unmarked graves’,” which was moderated by Tom Flanagan, a former adviser to Stephen Harper and a long-time critic of Indigenous rights who has described residential schools as a “visionary program.”

In a statement, Flanagan said he was not allowed to discuss his panel.

Asked why Civitas would decide to include a panel on residential schools, Malcolm noted her organization seeks to challenge “basic assumptions.”

“The panel was interesting and thought-provoking,” Malcolm told PressProgress. “I agreed and disagreed with aspects of what the panelists said, and again, that is the purpose of Civitas.” 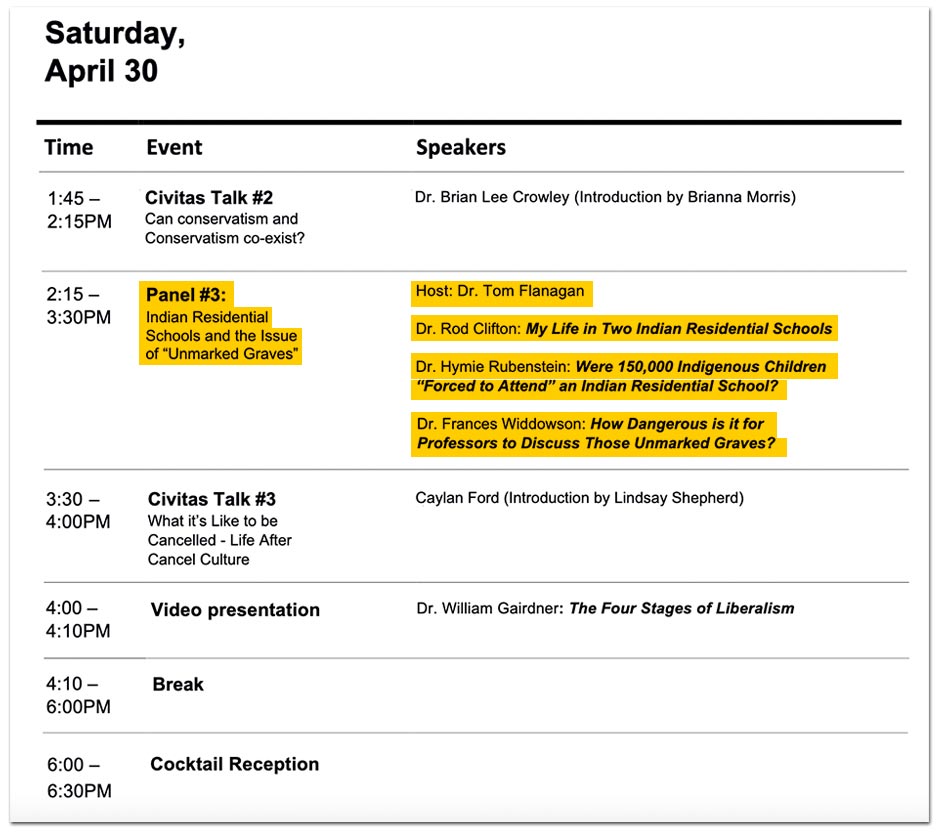 Frances Widdowson, a former Mount Royal University professor whose presentation was titled “How dangerous is it for professors to discuss those unmarked graves,” has a long history of defending the residential schools program.

In her co-authored 2008 book, “Disrobing The Aboriginal Industry,” Widdowson responded to “accusations” of cultural genocide by arguing residential schools benefited Indigenous children by “discouraging” their “animistic superstitions” and “encouraging of self-discipline.” The schools’ failure to do this, the book claims, has only doomed Indigenous people to “economic dependency.”

Widdowson also claimed the history of oppression faced by Indigenous people was being deliberately misrepresented in order to secure “special rights” and “benefits on the basis of ancestry” for Indigenous people.

“Any time there is a land defence, all of these right-wing folks are asked to speak,” Proulx said of the Civitas panelists, adding that such panels serve to give “ideologically-driven racists” an “intellectual justification and rationalization for their views and actions.”

Widdowson and Flanagan’s associations go back at least to 2010, when Widdowson organized a panel for the Frontier Centre for Public Policy titled “New directions in aboriginal policy” when the two appeared alongside Gary McHale and Mark Vandermaas, two far-right “militia” associates.

During the 2006-09 Grand River Land Dispute, McHale and Vandermaas were both heavily involved in the anti-Indigenous protests. Vandermaas himself has spoken at rallies organized by the far-right anti-Muslim group PEGIDA, while McHale was a founder and spokesperson for the “Caledonia Militia,” which was prepared to use “force” against Six Nations land defenders on behalf of local landowners.

A petition signed by hundreds of academics condemned Widdowson for extending an invitation to McHale and Vandermaas militia associates.

Canadian Anti-Hate Network board member Kurt Phillips said McHale and Vandermaas’ ties to the far-right were well-known at the time.

“Vandermaas is and was cozy with Pegida in Ontario,” Phillips told PressProgress. “McHale has a pretty long history of the far-right associating themselves with his anti indigenous agenda.”

“Among the groups present at one of his Caledonia protests included the Northern Alliance and the Canadian Heritage Alliance and Paul Fromm,” Phillips noted. “That Widdowson and Flanagan would willingly ally themselves with those two is rather telling.”

The panel also included former professor Hymie Rubenstein asking “Were 150,000 Indigenous Children ‘Forced to Attend’ an Indian Residential School?” and former Residential School teacher Rodney Clifton who, in 2008, wrote a column for the National Post titled: “For many aboriginal children, residential schools were a positive experience.”

“Many Canadians have described their years in the Residential school system as very positive,” Gairdner wrote. “The efforts those schools made to educate, feed, and shelter Indian children in need and help them transition to the realities of the European civilization that had become the dominant force in their lives.”

More ominously, Gairdner claimed that the high death rates in the schools came not from abuse and neglect but from their genetic makeup, namely their “Indian biochemistry.”

“Native Americans have always died at unbelievably high rates from infectious diseases compared to those of European stock,” Gardiner wrote. “Our residential schools may actually have protected native children from far worse death-rates than they actually experienced.”

This reflects a longstanding, racist trope based on highly-suspect methodology. As the Globe and Mail noted, among disease-borne deaths, Tuberculosis was the most common in many schools. And, the causes of TB infection are well established. As early as 1907, the chief medical officer of the Department of Indian Affairs identified the conditions in the residential schools, like hunger, malnutrition, crowding and poor ventilation, as ideal vectors for TB transmission.

None of Flanagan’s panelists responded to multiple requests for comment, but in a statement, UCP leadership candidate Danielle Smith distanced herself from Flanagan’s panel.

“I did not stay to hear the remaining speakers or panel discussions so I did not hear first hand what they said,” Smith told PressProgress, adding she was “asked to moderate a panel on the COVID response.”

“As for my own views, I can say the residential school system was clearly wrong. Children should never have been forcibly taken from their families.”

Conservative MP Garnett Genuis did not respond to requests for comment from PressProgress.

Here is a copy of Civitas’ full 2022 conference program:


Update: This story has been updated to include statements from Danielle Smith and Candice Malcolm which were supplied after this article was first published.