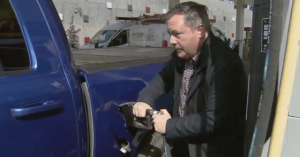 The Premier of Alberta had trouble pumping his own gas

Already facing questions about his political future, Jason Kenney is now facing another urgent question: Does the Premier of Alberta know how to pump his own gas?

A recent video of Kenney struggling to use a gas pump at a campaign-style photo-op has been viewed more than one million times on social media in just one day.

The video shows Kenney, who launched a $30 million energy war room to wage battle against children’s cartoons and other perceived enemies of Alberta’s oil industry, awkwardly fumbling with a gas nozzle as he tries — but repeatedly fails — to pump gas into his blue Dodge Ram.

From earlier today, Premier Jason Kenney had some issues after filling up his truck with gas. Yet another reason why I would never want to be a politician and surrounded by cameras. pic.twitter.com/Jsgxz1f31p

According to publicly available data, video of the gaffe posted to Twitter by City News reporter Tom Ross has now been viewed over one million times.

To put that number into perspective, the province of Alberta’s population is just over four million people. The video has also reached double the number of people who watched Prime Minister Justin Trudeau lay out his justification for invoking the Emergencies Act in February.

The video could not come at a worse time for Kenney. Polls show Kenney’s personal popularity has plummeted to 30% ahead of a UCP leadership review that begins on April 9.

Kenney’s hold on the UCP leadership increasingly looks to be as firm as his hold on a gas nozzle as old political rivals sense weakness.

Kenney has been openly mocked by former members of his own caucus — MLA Todd Loewen, who resigned from the UCP in protest against Kenney’s “leadership style” and COVID-19 public health rules, tweeted a video Saturday demonstrating that he knows how to pump gas.

Another former UCP MLA, Derek Fildebrandt, who was kicked out of the UCP after pleading guilty to poaching a deer, also took a shot at the man responsible for ending his political career.

The Western Standard publisher tweeted that whenever he uses a gas station in a photo-op, unlike Kenney, he makes sure his gas nozzle “goes in.”

I don’t always do gas tax fill up photo ops,

but when I do,

The Beaverton, on the other hand, offered a different explanation.

The satirical website suggested Kenney’s “nozzle difficulty” was simply a result of the fact he’s “never pumped gas” before.

Kenney assures Albertans that nozzle difficulty is only because he’s never pumped gas or seen a truck in his entire life #NewsInPhoto #ableg pic.twitter.com/9T5eSreD3J