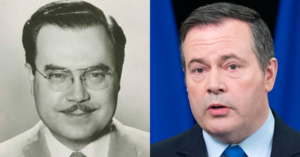 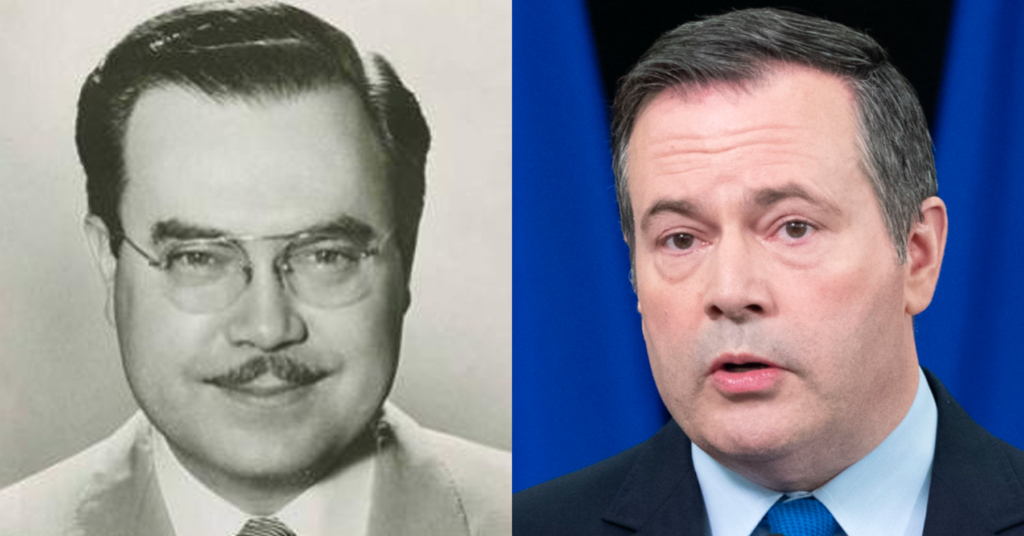 Alberta’s UCP government just rolled out a draft education curriculum for students from kindergarten to grade 6, and the new content is already leaving many Albertans scratching their heads.

In advance of the 2019 provincial election, Kenney frequently promised to overhaul Alberta’s education curriculum, going so far as to accuse former Premier Rachel Notley of using the education system for “social engineering.”

On Monday, Kenney’s government released its draft curriculum and was met with immediate criticism from experts who voiced concerns that its social studies section white-washes history, particularly on Indigenous history and British imperialism.

The curriculum’s social studies content was developed by a long-time political adviser to Kenney who helped design the Harper government’s controversial citizenship guide.

An earlier version of the draft curriculum leaked last fall was also widely criticized by education experts too.

In fact, the draft education curriculum details lesson plans that may seem a little too advanced for ordinary six-year-olds:

• 1st graders will learn about “hieroglyphics,” “the teachings of Confucius” and concepts like the “divine right of kings.”

• 2nd graders will be required to learn about the Holy Roman Empire, the Norman Conquest of England and the “origins of common law.”

• 3rd graders will be asked to analyze 17th century French governance structures with a goal to “identify the weaknesses in the government of New France.”

Alberta’s Ministry of Education did not respond to questions from PressProgress  about concerns the curriculum includes topics that are not age appropriate for young school children.

But “fine arts” in grade 6 is where things really start getting strange.

For one thing, Kenney’s government is mandating that every student learn jazz-era “dances like the lindy hop, the jive, the jitterbug and the boogie-woogie.”

Kenney’s Ministry of Education did not respond to questions about the rationale behind having students learn the lindy hop or why it highlighted swing dancing as priority for all students in Alberta to learn.

Students will also be asked to learn how composers “structure a musical work based on a variety of factors, including ensemble size and what instruments or voices to highlight.”

The curriculum points to examples like “Gustav Mahler, Symphony No. 8 in E-Flat Major (Symphony of a Thousand) Pt. 1” as an example of how 6th graders can learn that “western music choirs are structured according to group members’ vocal ranges, including bass, tenor, alto, and soprano.”

“Big band ensembles give jazz music a larger sound,” the curriculum continues, noting this is best exemplified by Mart Kenney’s “When I Get Back to Calgary.” 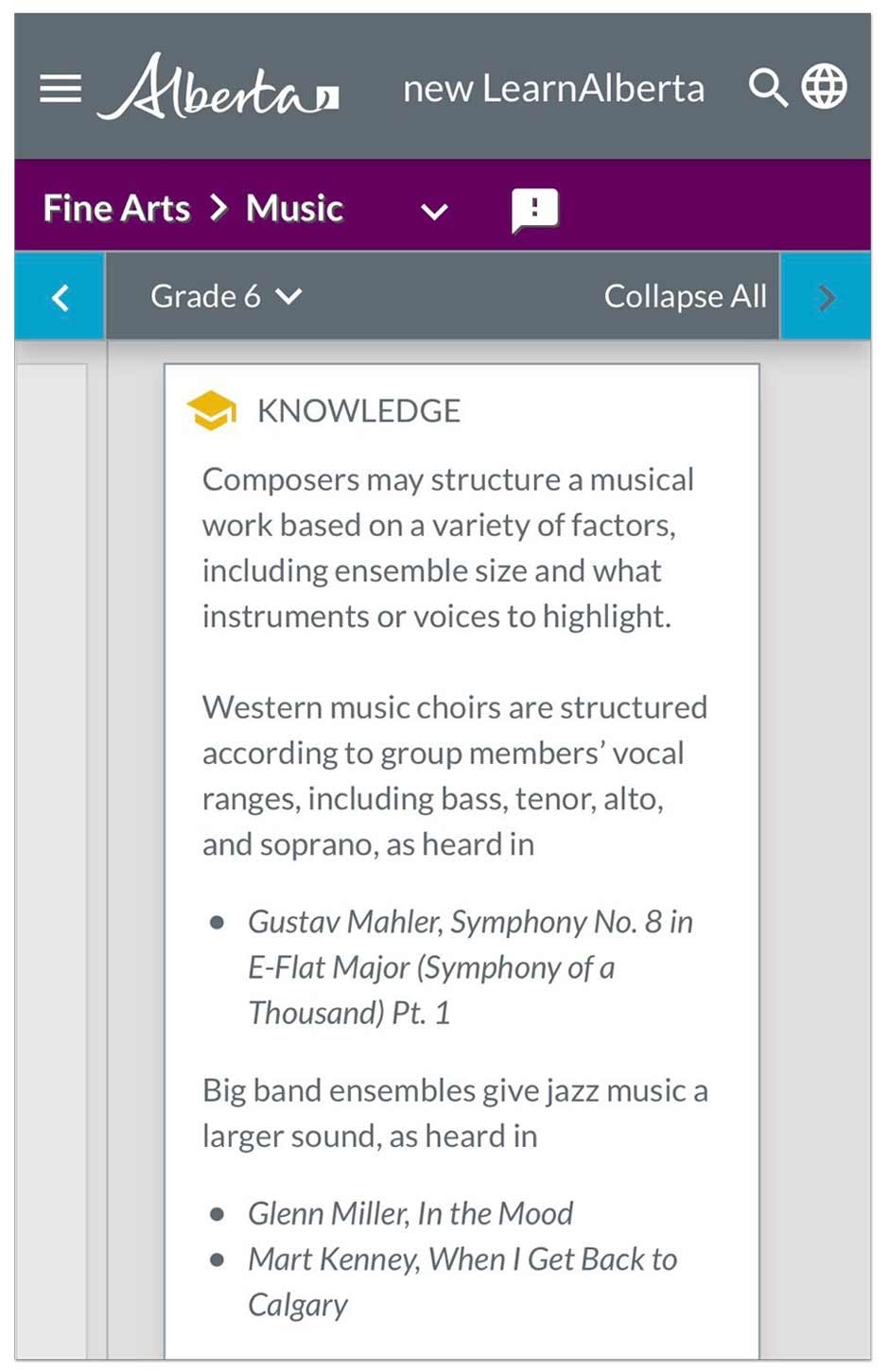 Mart Kenney is a Canadian jazz musician who was active in the 1930s and 1940s.

Stumbled across fun song written by my grandmother Norma Locke & recorded by Mart Kenney, When I Get Back to Calgary https://t.co/gX6nuAyMu8

According to Historica Canada, the Mart Kenney and the Western Gentlemen jazz band was primarily known for doing radio performances during World War Two.

Jason Kenney has long sought to promote his grandfather’s legacy. In a 2006 profile for Maclean’s, Kenney described his grandfather as a “household name for most Canadians in the 1930s, ’40s and ’50s.”

“Mart Kenney’s music always reflected the Canadian temperament,” Kenney wrote. “He learned early on, playing dime-a-dance halls, that he could fill the floor by playing slow waltzes, but it would virtually empty when he played foxtrots or show tunes.”

While Mart Kenney may have some relevance to the early history of Canadian radio broadcasting, nearly a century later, few if any Albertans have likely heard of him.

In fact, the notion that Kenney’s grandfather is one of the world’s great jazz musicians has left more than a few people scratching their heads:

I’ve read some ridiculous stuff from today’s curriculum release and so far, this takes the cake. #abed #ableg https://t.co/bwVgQShEkT

In case you needed further evidence Jason Kenney’s fingers are all over this curriculum. I’m sure glad he lectured us all on the need to get politics and politicians out of the development process. 😒 #abed #ableg https://t.co/2XfAYwKEPY

Jazz is an art form that developed primarily in black communities.

Imagine taking an art form away from those who developed and handing it to (checks notes) your OWN GRANDFATHER!!#ableg #abed #ucp https://t.co/XzTsV2BlJ5

This might actually be too weird and comically tinpot-dictatorshippish to even be bothered by https://t.co/EYKERgfhGB

In addition to a being a famous musician (thanks CBC!), he was an order of Canada recipient and tried, but failed to secure a Liberal nomination to run to be in Pierre Trudeau’s gov’t.

Alberta’s Ministry of Education did not respond to questions from PressProgress about whether it is justifiable to include lessons about the Premier’s grandfather in the province’s education curriculum.