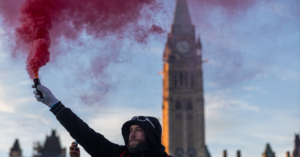 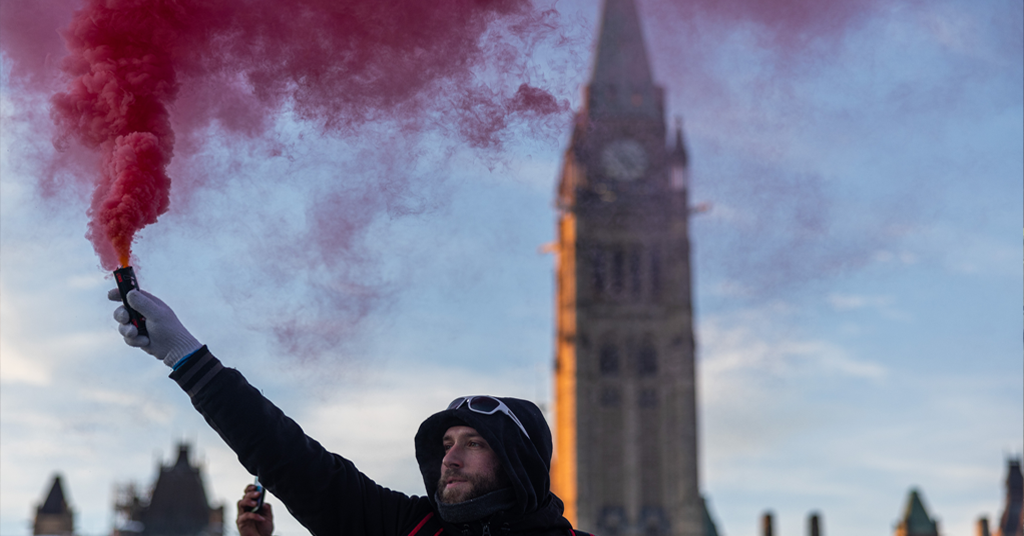 Participants of a far-right convoy occupying Canada’s national capital have wreaked havoc in the lives of many workers for nearly two weeks.

Despite claiming to fight for the “freedom” of “working-class” people, real workers in Ottawa have reported experiencing harassment, assault, and intimidation. Workers have also lost wages and access to public services as downtown workplaces and buildings closed as safety precautions.

In one of the earliest reports on January 29, workers at the Shepherds of Good Hope, an Ottawa homeless shelter, reported intimidation and harassment from a small group of convoy members who harassed staff and volunteers into giving them free food.

“Staff and volunteers were verbally harassed by people who came to the kitchen looking for meals,” Shepherds of Good Hope President and CEO Dierdre Freiheit said in a radio interview.

“One of the people who used services in the shelter was assaulted,” said, adding the person assaulted was also subjected to “racial slurs.”

Friends, it’s been a difficult 24 hours. Staff harassed for meals. A service user and security guard assaulted. Through it all, you have donated and filled our hearts with gratitude. Every cent will support people experiencing homelessness. Thank you. See our statement ⬇️ pic.twitter.com/TYHD8r8aLo

That same day, convoy members wandered maskless around the Rideau Centre, Ottawa’s biggest shopping mall, harassing workers and urging them to take off their masks.

“I tried to just keep my head down. It was the scariest thing I’ve ever seen in the mall and I’ve worked there for four years,” Rayene Bimbachi, a 22 year old shop worker told the Ottawa Citizen.

“They came in and started yelling and screaming at people,” another shop worker named Roberta Arlidge told CTV News. “Everything that is going on right now is just scary.”

The Rideau Centre has been closed for 12 days and counting, causing 1,500 retail and service sector workers in hundreds of shops to lose shifts and wages.

“We have no income and the people that come in everyday that I know are single mothers and are struggling. If they miss one shift, they have no money and I know for myself I have no savings so it’s like one shift, I’m done,” Arlidge added.

Another downtown Ottawa shop, Moo Shu’s Ice Cream and Kitchen, made the decision to close for two weekends straight after one of its workers was assaulted by two men on their way to work.

Based on the accounts we’ve heard from our neighbours, this behaviour is not an isolated incident. It’s taken the day for us to let it sink how not OK we are. Please pardon the last minute change, and we’re sorry if you braved a trek to support us to find us unexpectedly closed.

“They were yelling racially charged slurs at me and asking me if the reason that I had my mask on was because I was an anti-Asian slur,” the worker told CBC News, adding the men shoved them to the ground before leaving.

Liz Mok, owner of Moo Shu’s, said that in over six years of operating downtown, she’s never experienced a protest as “scary” as this.

“I don’t think that we thought it was going to feel as scary or as disruptive as [it’s been] and then we also didn’t anticipate it to last so long,” Mok said.

UPDATE: Ottawa paramedics confirm protesters threw rocks at three ambulances this weekend in different parts of the city. They also confirmed that an online report of a death caused by traffic delays is untrue. #ottnews https://t.co/nYd2MBzCls

A downtown hotel in Ottawa has offered a “safe room” for “health care and other essential workers” who feel unsafe traveling through the downtown core.

Ongoing harassment prompted an Ottawa physician to write an open letter denouncing the actions of convoy participants. The letter has been signed by over 1,600 doctors and health care workers across Canada.

“We, the undersigned physicians, nurses, healthcare workers, and public health scholars across the country, will NOT hide out of fear of violence from hate-fueled convoys,” the letter states.

“We will not cower. We will not hide. We will wear our scrubs in public, without fear, knowing that you — Canadians — have our backs.”

Teaching Assistants and Contract Instructors at Ottawa’s Carleton University have also condemned harassment and intimidation from the convoy in a statement, highlighting how many public services have closed in response to the protests.

“Our friends and neighbours were spat at and called homophobic slurs. Fellow workers were verbally assaulted and threatened, just for trying to do their jobs,” the CUPE 4060 statement reads.

”Today, many of us are unable to access the essential services we need to survive, as threats of violence have forced a number of schools, daycares, libraries, and community health centres to close.”

The Ontario Federation of Labour and the Canadian Labour Congress have also condemned the far right convoy following workers’ reports of harassment from Ottawa and across Canada.

The Teamsters union which represents approximately 15,000 long haul truck drivers across Canada has called the convoy a “despicable display of hate lead by the political Right” which has “served to delegitimize the real concerns of most truck drivers today.”

The Real Enemy for Truckers is Covid-19

In Alberta, the far-right convoy has blocked the US-Canada border which left many South Asian Canadian truck drivers stranded for days.

Convoy organizers and the business lobby initially warned that the small number of unvaccinated truckers forced to isolate upon re-entering Canada would create supply-chain issues. However, the convoy has enthusiastically disrupted the auto-parts supply chain by blockading the Ambassador Bridge between Windsor and Detroit. Auto manufacturing workers in Canada have had their shifts reduced in response to shipment delays.

“These blockades at border crossings serve no purpose other than to attack workers’ jobs by threatening production slowdowns and additional periods of layoff,” says Unifor’s Shane Wark on the disruption on Ambassador Bridge between Windsor and Detroit. https://t.co/oWYjWuhewg

“If these lines don’t run and the workers are sent home, then these working families unfortunately become collateral damage to the protest that’s going on at the bridge,” Cassidy said.

Teamsters International has also denounced the border blockades, saying: “The livelihood of working Americans and Canadians in the automotive, agricultural, and manufacturing sectors is threatened by this blockade. “

This anti-worker behaviour appears to be part of a trend, as key convoy organizers and supporters have a history of harassment and making threats against workers on the picket line.