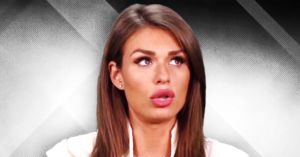 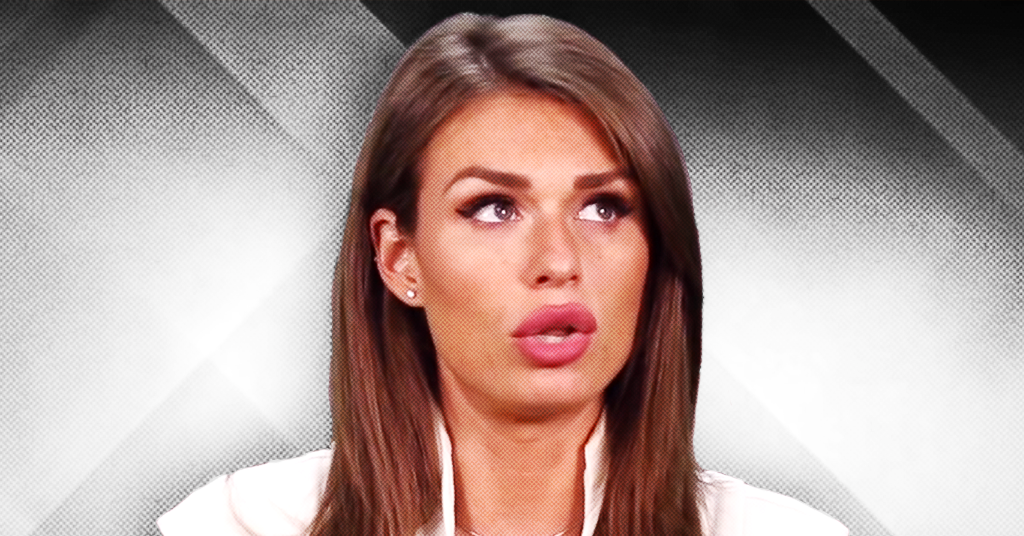 In the closing days of Toronto’s municipal election, Russian state-run outlets RT and Sputnik are publishing glowing puff pieces, uncritical interviews and viral videos  about Faith Goldy, recasting the controversial white nationalist candidate as a “plucky outsider” and a “rising threat to the establishment.”

The Russian outlets simultaneously offer thin excuses for Goldy’s well-documented ties to white supremacists and neo-Nazi groups, downplaying her past controversial statements as nothing more than a playful “sort of free speech dare.” 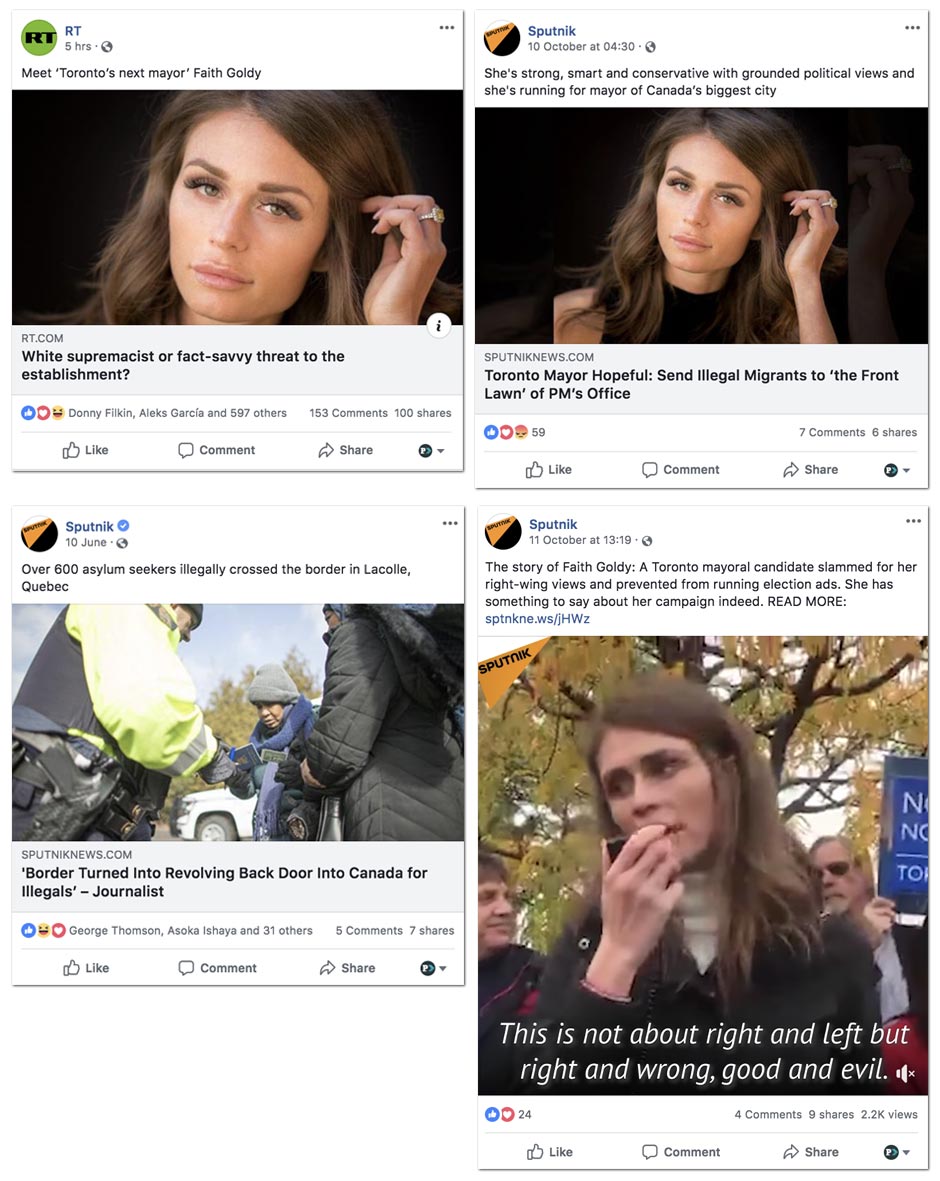 An analysis of social media activity by PressProgress shows the Russian propaganda articles have managed to circulate among Goldy’s supporters and ultranationalist far-right Canadian Facebook pages. 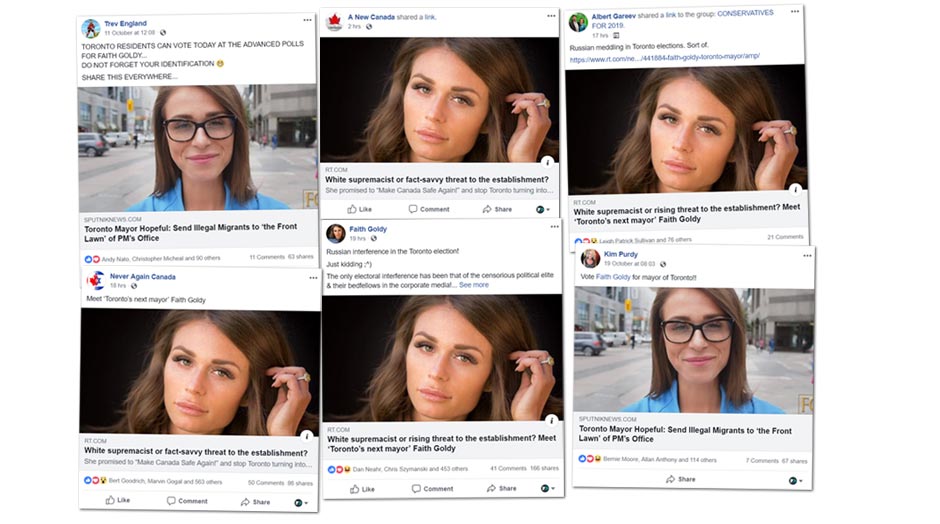 Goldy is a former Rebel Media contributor who was fired from the far-right website after she praised a manifesto calling for a white ethno-state and appeared on a neo-Nazi podcast.

She later became an independent alt-right YouTuber, appearing in videos reciting a white supremacist creed and endorsing a book authored by a 1930s fascist author advocating “the elimination of Jews.”

Last year’s report from the US Office of the Director of National Intelligence on Russian interference during the 2016 elections describes RT and Sputnik as key instruments in “Russia’s state-run propaganda machine.”

RT is specifically identified as “the Kremlin’s principal international propaganda outlet” while Sputnik is said to reinforce “pro-Kremlin” messaging over social media.

In 2017, the Moscow-based RT complied with the US government and formally registered as a “foreign agent” of the Russian government.

The Russian government claims RT is a source for “alternative views,” but their slant editorially is less ideological than it is opportunistic, amplifying voices on opposite sides of divisive issues as part of a strategy aimed at fuelling “discontent” abroad.

In Europe, RT and Sputnik have been influential in building and fuelling far-right online communities centered on anti-immigration and anti-refugee issues.

Richard Spencer is a neo-Nazi, but, for RT, he is a “political analyst” and an expert on Lybia (2012). pic.twitter.com/VE5dr1ZkiL

Both articles from RT and Sputnik paint a sympathetic portrait of Goldy.

RT, which misspells her name as “Goldie,” calls her a “plump-lipped” and “plucky outsider” who could be “Toronto’s next mayor.” Sputnik calls her “strong” and “smart” with “grounded political views.”

RT absurdly claims Goldy is not a white nationalist, but merely a critic of “cultural relativism that devalues European culture, and the embrace of multiculturalism.”

They claim she is “censured by rivals” and “blacklisted by major media outlets,” all because she wants to stop Toronto from turning into a “sharia safe space.”

The propaganda channel also strikes a complimentary tone towards Ontario Premier Doug Ford for issuing an “ambiguous statement” rather than a “groveling disavowal of Goldy” after he posed for a photo with Goldy and members of her campaign team, which included members of the group ID Canada, an affiliate of the European “neo-fascist” group Generation Identity. 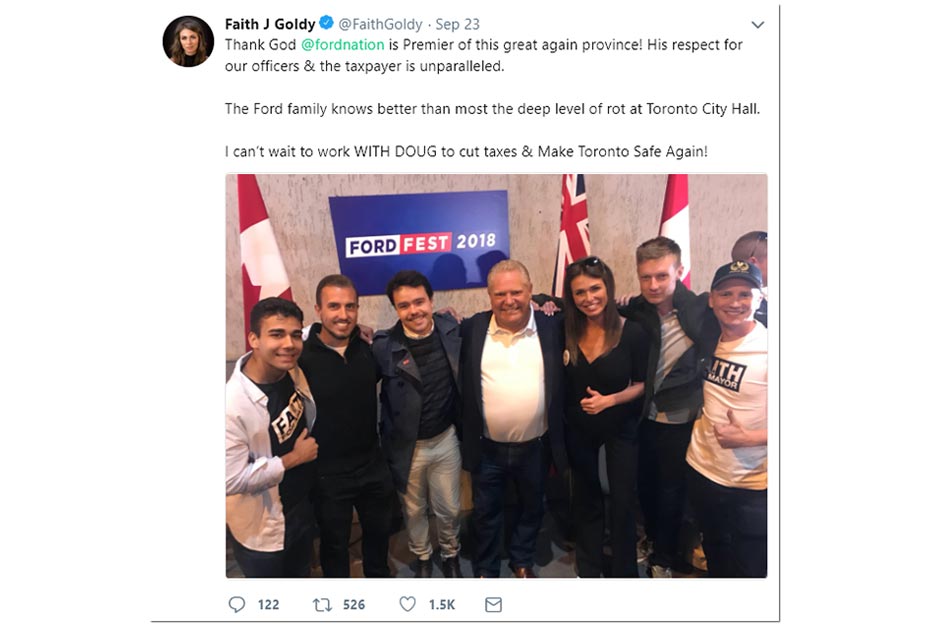 Goldy, not surprisingly, welcomes the attention.

Goldy tweeted a link to RT’s puff piece Sunday night, nonchalantly calling it  “Russian interference in the Toronto election,” before claiming she was “kidding” and then accusing “the censorious political elite and their bedfellows in the corporate media” of being the ones meddling in Toronto’s municipal election.

Russian interference in the Toronto election!

The only electoral interference has been that of the censorious political elite & their bedfellows in the corporate media!

While RT ultimately concedes Goldy will not win the election, the propagandists are eager to plant the false idea that her inevitable loss is the result of being blacklisted and “ground into obscure irrelevance” by Canada’s “establishment”:

“The guardians of Canada’s political propriety need not worry about her – for now. But as they serve up their victory feast, will doubts prickle their minds? Was this a decisive victory, considering their advantages in numbers and equipment? Was it won fairly and with glory, according to the code of chivalry to which they ostensibly subscribe?”

Ironically, one person who does not subscribe to that theory is Goldy’s former employer, Rebel Media’s Ezra Levant.

Like his “bedfellows” in the media party and political establishment, the far-right pundit isn’t covering Goldy’s campaign either.

Not because he disagrees with Goldy’s extremist ideas, but because she’s “marginal” and her campaign is a “Twitter vanity project” that’s all about building up followers on social media.