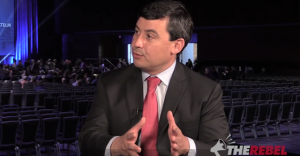 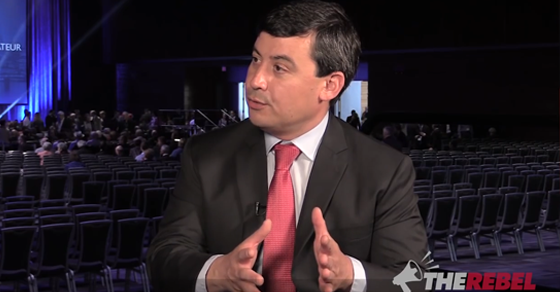 "I will not do interviews with Rebel Media."

In a statement Monday to Press Progress, the former Conservative leadership candidate ruled out any future appearances on the alt-right website, stating “I will not do interviews with Rebel Media.”

Chong also condemned Rebel Media for actively promoting “anti-Semitism” and “white supremacy,” and added that “calling for a democratically-elected premier to be locked up” is something “I strongly oppose and find offensive.”

“I believe in an inclusive Conservative Party that includes Canadians of all races, religions and creeds.”

During the Conservative Party of Canada’s 2016 convention, Chong was interviewed by Rebel Media’s Brian Lilley on the convention floor – one of many Conservative MPs who has appeared on the website since it launched in 2015.

Chong explained to Press Progress he has “not done interviews with Rebel Media ever since their editorial direction changed about a year ago.” Levant’s Rebel Media website has increasingly generated embarrassing headlines for its allies – one Rebel Media host created an international media storm after he filmed videos questioning the Holocaust and explaining why he “hates Jews,” something that earned praise from neo-Nazis and a former Ku Klux Klan Grand Wizard.

Rebel Media’s Faith Goldy traveled to Charlottesville and live streamed the rally that ended in terror when a neo-Nazi drove a car into a crowd of anti-racist protesters, killing one and injuring 34 others.

Throughout the rally, Goldy broadcast statements that appeared to sympathize with white supremacists.

“There has been a rising in, I think, white racial consciousness,” Goldy said. “I think a lot of white men, specifically, this seems to be their struggle – are mad as hell and they’re not gonna take it anymore.”

Goldy also told Rebel viewers the alt-right protesters were “here for your freedom.”

Following the car attack, Goldy appeared on an alt-right YouTube stream where she praised a manifesto written by neo-Nazi leader Richard Spencer for its “robust” and “well thought out ideas.”

The first three points of Spencer’s manifesto discuss the “Aryan” race, “Jews” (or, as Goldy calls it the “JQ” or Jewish Question) and declares that “racially or ethnically defined states are legitimate and necessary.”

Although Goldy praised it for its “well thought out ideas,” even Levant described Spencer’s manifesto as an “explicitly racist” document.

Below is Chong’s full statement to Press Progress:

“I will not do interviews with Rebel Media, and have not done interviews with Rebel Media ever since their editorial direction changed about a year ago. Among other things, that change in editorial direction includes the promotion of anti-Semitism, white supremacy, and calling for a democratically-elected premier to be locked up. These are all things that I strongly oppose and find offensive. I believe in an inclusive Conservative Party that includes Canadians of all races, religions and creeds.”

UPDATE: Rebel Media co-founder Brian Lilley, who interviewed Chong at the 2016 Conservative Convention, announced Monday night that he has resigned from Rebel Media.

In a statement published on Facebook, Lilley said he has become “uncomfortable” with Rebel Media’s turn toward the “alt-right” and cited the website’s coverage of the deadly Charlottesville rally as the final straw.

Lilley added that the reason he is leaving is because Rebel Media “suffers” from a “lack of editorial and behavioural judgment that left unchecked will destroy it and those around it.”