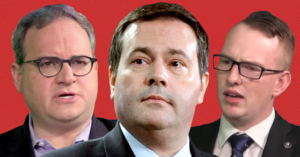 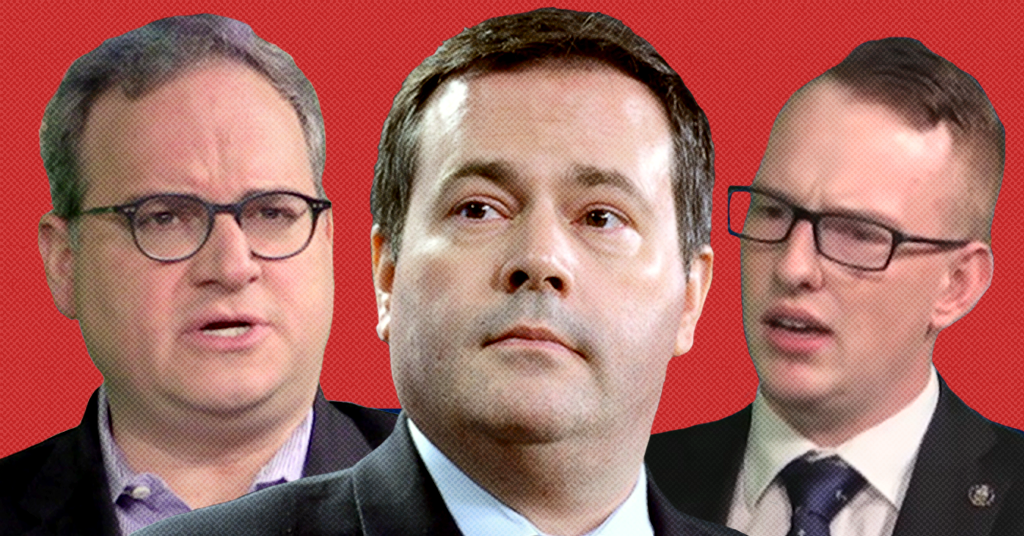 Rebel Media’s Alberta correspondent says that if Jason Kenney kicks a homophobic speaker out of the United Conservative Party, he can “terminate” the memberships of 600 UCP members who were “cheering him on.”

Kenney is currently facing calls to expel a UCP member who compared rainbow pride flags to the Nazi swastika at this weekend’s “Rebel Live” event in Calgary.

John Carpay, a speaker from the Justice Centre for Constitutional Freedoms, compared gay rights to “totalitarianism,” telling hundreds of Rebel Media fans the rainbow pride flag and swastika both represent a “hostility to individual freedoms.”

Speaking at #TheRebelLive, John Carpay of @JCCFCanada just compared the rainbow flag to a swastika, and said that protecting LGBTQ rights is totalitarianism. In case you were wondering if they were bigots. #cdnpoli pic.twitter.com/jMdezFWUBs

Kenney is facing additional pressure to take a clear stand against Carpay’s remarks given he is a longtime ally of the UCP leader.

The Justice Centre for Constitutional Freedoms is leading a court challenge against an law preventing schools from outing students who join Gay-Straight Alliance clubs in Alberta. The JCCF receives significant funding from the Aurea Foundation, a charity established by the late billionaire Peter Munk to fund right-wing groups across Canada, such as the Fraser Institute.

After video trickled out of the event, Rebel Media’s alt-right Alberta correspondent  Keean Bexte took to Twitter to defend both Carpay and his statements.

In a tweet aimed at Kenney and UCP executive director Janice Harrington, Bexte warned that if Kenney terminates Carpay’s membership, he “will have to terminate my membership and the 600 rebels who were cheering him on.” 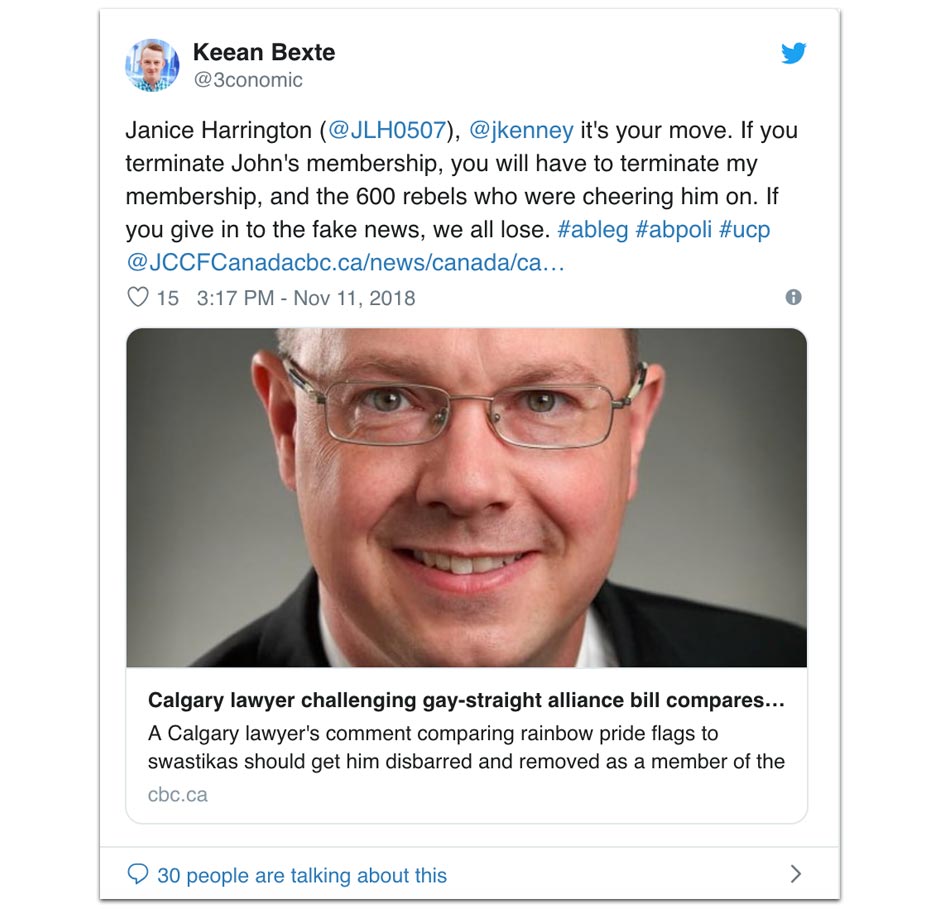 Bexte later deleted his tweet sometime in the middle of the night.

Last week, Kenney vowed to purge extremist elements from the UCP, going so far as to promise he would create a database to track UCP members with “aberrant or extreme views” lurking in “the dark corners of the Internet.”

Kenney was responding to a report from PressProgress that revealed his call centre had been run by Adam Strashok, a young conservative who operated an online store selling white supremacist memorabilia and had a history of posting anti-Semitic and white nationalist messages on social media.

That could prove another reason Kenney may need to “terminate” the Rebel Media correspondent’s party membership too.

Bexte and Strashok are close friends and were both executives on the University of Calgary’s controversial Wildrose on Campus club, a group former Wildrose leader Brian Jean distanced his party from and demanded the club stop using its logo amid concerns over the group’s “anti-female” and “alt-right” extremism.

Bexte himself made national headlines after WROC sent out an e-mail promoting a misogynistic alt-right film with the subject line “feminism is cancer.”

As a result, Bexte was forced to resign as a delegate for Jason Kenney’s coronation at the 2017 Alberta PC leadership convention.

The Rebel Media correspondent also has a history defacing anti-racist messages on the U of C campus. 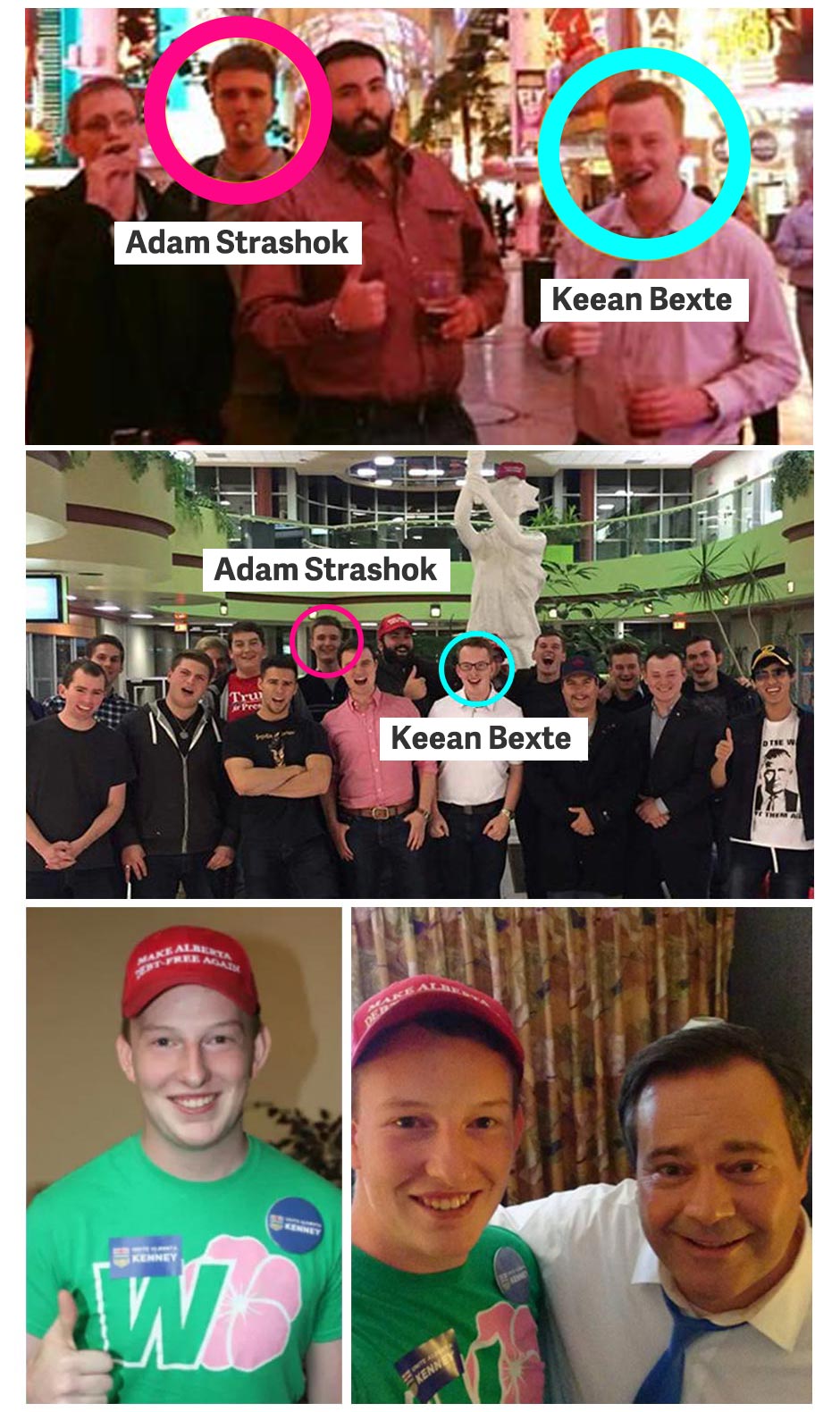 Also speaking at the “Rebel Live” event was Scott Winograd, a former UCP nomination candidate who withdrew after his “extreme views’ on climate change, abortion and LGBTQ issues came to light.