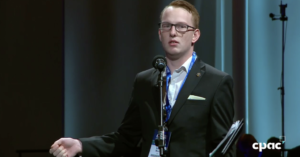 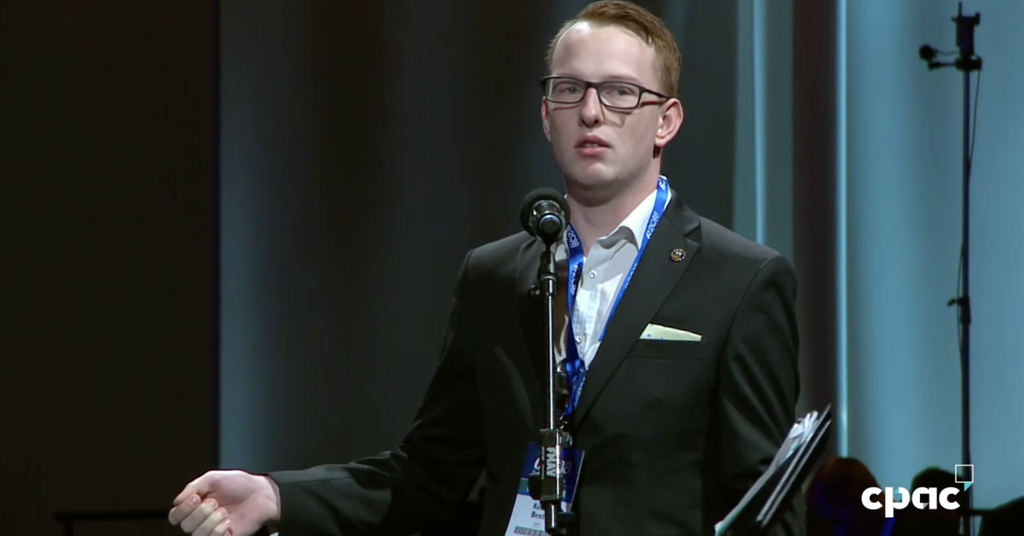 The lead speaker on a successful resolution to make ending birthright citizenship the official policy of the Conservative Party of Canada has been at the centre of multiple “alt-right” controversies at the University of Calgary.

Keean Bexte, a former Conservative staffer, made national headlines last year after resigning in disgrace when his campus conservative club promoted a film produced by alt-right figures by sending an e-mail declaring “feminism is cancer.”

This weekend during the Conservatives’ national convention in Halifax, Bexte introduced and advocated for a resolution to “eliminate birthright citizenship” before a full membership vote Saturday.

“Let us inherit our citizenship,” Bexte told delegates, “not hand it out arbitrarily.”

Conservative delegates voted to adopt the policy, ending a longstanding consensus  that citizenship is guaranteed to any child born on Canadian soil and opening the door to stateless children who hold no legal rights anywhere in the world.

The policy echoes anti-immigrant rhetoric floated by US President Donald Trump, even though birthright citizenship is guaranteed by the US constitution.

After Conservatives voted to adopt the policy, it was immediately condemned for promoting “division and hate” by other party leaders – and Conservative MPs.

#CPC18 delegates voted in favour of ending birthright citizenship for children born in Canada unless one parent is Canadian or a permanent resident. Even Trump has resisted this idea. The NDP unequivocally condemns the division & hate being peddled by @AndrewScheer & the CPC.

“The government should not have a right to decide who is Canadian,” says Calgary MP @deepakobhrai after Tory delegates voted to end birthright citizenship at #CPC2018 today https://t.co/32CToIlthd #cdnpoli

Although it was sponsored by two Conservative electoral district associations in Newfoundland and Labrador, one EDA president told CBC News he was not aware the policy was presented under his district’s name. Another EDA executive said the resolution was based on a petition from a Conservative MP in BC.

Bexte was first at the microphone with scripted lines during the plenary session as well as a policy break-out workshop a day earlier.

I’m very happy to say that Birthright Citizenship has passed at #cpc18! #cdnpoli thanks @DanielJHannan 🙂

Bexte, a former staffer for Conservative MP Bob Benzen and a recruiter with the right-wing Manning Centre, made national headlines in 2017 after he resigned in disgrace from a UCalgary campus conservative club he helped run.

In 2017, the Wildrose on Campus (WROC) club sent an e-mail blast to students with the subject line “feminism is cancer,” inviting young UCalgary conservatives to a screening of a men’s rights activist film called “The Red Pill” – financed by crowd funders after it was boosted by alt-right voices like Breitbart, Milo Yiannopolous as well as Mike Cernovich, who is also a producer of the film.

The e-mail generated a firestorm of controversy leading Brian Jean, former leader of the now defunct Wildrose Party, to distance the party from its own campus club and demand the club stop using its logo. Things took a strange turn when Bexte told the media he personally fired the club’s communications director, one “Robert McDavid” – except there’s no evidence that person is real, other than a one-day old Facebook account using Pepe the Frog, a symbol of the alt-right, as its profile picture.

That controversy led to the youth wing of the Alberta PCs forcing the Wildrose campus club executive to resign as a delegate for Jason Kenney’s coronation at its 2017 leadership convention.

Bexte also made headlines last fall after a fellow campus conservative spray-painted a confederate flag on a rock and wrote: “Robert E. Lee did nothing wrong.”

After the confederate flag – painted on a rock UCalgary students have used to share messages for the last 50 years – was repainted with messages like “one campus, one love” and “Black Lives Matter,” Bexte was spotted by the campus newspaper defacing the anti-racist messages.

According to The Gauntlet, the words “Black Lives Matter” were painted over with a heart and the word “Trump” and a message suggesting students who painted over the confederate flag should “wait 24 hrs, plz.”

In 2016, Bexte was photographed painting Donald Trump’s logo over the same rock, along with the message: “Hillary 4 Prison.”