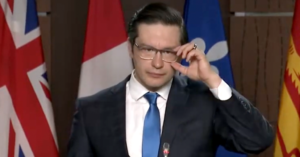 Poilievre has spent much of his leadership campaign paying lip service to Canadian workers and claiming, without evidence, that workers support him.

“The working class people are enthusiastic about my campaign,” Poilievre tweeted earlier this year.

Poilievre, a career politician, has also responded to criticism that his campaign is promoting conspiracy theories by claiming he is defending the “working class” against “elites,” like “politicians and bankers.”

“Workers have every right to demand raises for soaring food, homes & fuel prices,” Poilievre tweeted on Labour Day. “Let’s be a country that gives its workers back control of their lives.”

In Canada, workers in unionized workplaces earn more than non-unionized workers on average thanks to collective agreements that force employers to negotiate with workers for wage and benefits.

Unionized workers are also at the forefront of securing significant wage hikes amid soaring inflation. And more young Canadian workers are showing interest in the labour movement, kickstarting union drives at places like Starbucks, Indigo and Sephora.

However, Poilievre aggressively fought card-check legislation that would make it easier for workers to unionize in favour of a two-step process that gives employers more time to interfere in the union drive.

Under Stephen Harper’s government, Poilievre was one of the loudest supporters of the anti-union Bill C-377, a likely unconstitutional piece of legislation that tried to force Canadian labour unions to disclose all of their internal finances while big corporations would not have been subjected to the same rules.

“I am the first federal politician to make a dedicated push toward this goal,” Poilievre stated in 2013 about bringing right-to-work laws to Canada.

“I am going to do my part to see that happens at the federal level and I would encourage provincial governments to do likewise.”

In 2012, Poilievre mounted a campaign to allow public sector workers to opt out of paying union dues, a proposal that sought took aim at the Rand Formula — a rule stemming from a Supreme Court decision that allows unions to collect dues.

“This is how he can say “recognize and reward hard work by making it pay” but not mention the primary vehicle by which workers have improved the terms and conditions of work, that is labour unions.”

“Of course he has a history of supporting anti-union, “right-to-work” policy, which has racist roots in the Jim Crow South.” Black added.

Right-to-Work laws were first championed in the US by a 1930s Texas businessman and white supremacist Vance Muse. Vance argued that Right-to-Work laws provide white workers with a means to “opt out” of union membership – and associating with Black workers.

Martin Luther King Jr. thus recognized right-to-work laws as a threat to the civil rights movement and good jobs in 1964.

“In our glorious fight for civil rights, we must guard against being fooled by false slogans such as ‘right to work,’” Martin Luther King, Jr. said. “It is a law to rob us of our civil rights and job rights.”

Poilievre was Stephen Harper’s Employment Minister while thousands of migrant workers had their work permits expire in 2015 which forced them to leave the country or remain as undocumented workers.

“Full immigration status for all, full rights for all workers is the only way forward. Resist attempts to divide unemployed, migrant and poor people.”

Massive campaigns from migrant rights organizers pressured the current Liberal government to develop a regularization program that could see over half a million migrant and undocumented workers granted permanent residency.

Poilievre defended his management of the temporary foreign worker program and the deportations: “Broadly speaking, we made the right decision with the program, and we’re going to continue.”