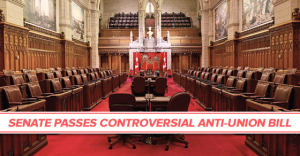 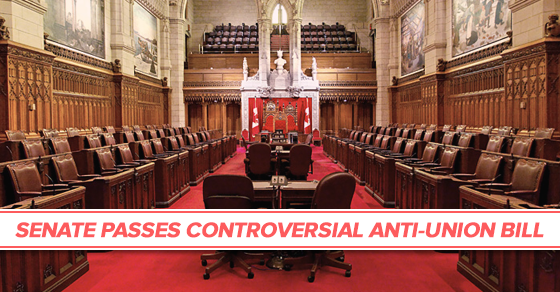 Expect a constitutional challenge to follow. Unless it's repealed first.

“The Bill appears to directly target activities protected by the Canadian Charter of Rights and Freedoms by requiring disclosure of time spent on political activity. Privacy is recognized as a fundamental constitutional right under Canadian law, and this Bill has the potential to invite constitutional challenge and litigation.”

“Freedom of association … guarantees that workers can get together and combine to promote their interest. It seems to me that when you give such an unfair advantage to the employer by asking, “How much does the union have in the bank? How much are they spending on this and that? I bet they can’t afford to strike; therefore, I’m going to take a very hard position on bargaining,” it will substantially interfere with the collective bargaining process, which the Supreme Court of Canada … found is a violation of section 2(d).”

“I must say that I am particularly troubled by the fact that Bill C-377 proposes to associate the name of specific individuals with political activities. These activities are clearly of a sensitive nature. Why require this disclosure when other schemes adopted in the name of accountability to taxpayers do not?

Although less sensitive, the public naming of individual payers and payees associated with transactions having a cumulative value over $5,000 is also, I believe, disproportionately intrusive from the privacy perspective as it would catch not only union members but also many third party contractors as well… I think it goes too far.”

“Payments to almost every party we transact with, including the writers’ insurance and retirement carrier, will be reportable, thereby exposing our members’ income. Also, our landlord, our Internet provider and office cleaners, et cetera, will have their invoices disclosed for public scrutiny. Additionally, who would want to provide services to us when we are forced to collect intrusive information on their political and non-labour relations activities?”

3. Seven of Canada’s ten provinces say they are opposed to it:

“The Alberta Government wishes to express our opposition to Bill C-377, An Act to amend the Income Tax Act (requirements for labour organizations). We believe this Bill infringes on provincial jurisdiction over labour relations legislation and, if passed it will compromise the capacity of unions to advocate effectively on behalf of their members.”

4. It will damage labour relations:

“We usually know little about the financial situation of employers, especially those that are privately-owned. The disclosure requirements would greatly upset the balance of power between unions and employers, and limit the ability of union members to meaningfully exercise their right to collectively bargain.”

5. Even the National Hockey League’s Players Association is against it:

“The NHLPA also administers a licensing program on behalf of our members under which third parties are granted the right to use players’ names and/or images in products such as video games, player trading cards, and NHL team jerseys and apparel. In the ordinary course the parties with whom we work have a reasonable expectation that the terms of such agreements will not be made public, and requiring disclosure could well make it more difficult for us to conduct those negotiations, reach and administer those agreements.”

6. It’s anti-conservative (according to a former Conservative senator):

“Conservatism in the Canadian Tory context is not about the protection of class or the oppression of labour by capital or capital by labour; it is about a freedom tied to mutual respect, whatever legitimate disagreements, between all the participants in the mixed free-market system. This bill before us, whatever may have been its laudable transparency goals, is really — through drafting sins of omission and commission — an expression of statutory contempt for the working men and women in our trade unions and for the trade unions themselves and their right under federal and provincial law to organize.

It is divisive and unproductive.”

7. Conservative MPs and Senators are hypocrites for backing C-377

“Bill C-377 is also, in my view, extraordinarily hypocritical, given that MPs fully paid by the public purse only publicly disclose one schedule with 14 lines of information, and the government amended a private member’s bill recently requiring disclosure of public sector salaries; only those over $444,000, quadruple the amount of the forced disclosure in Bill C-377 for labour officials, because labour dues are tax deductible.”

Conservative Senator Donald Plett, who was later flagged for inappropriate expenses by the Auditor General: