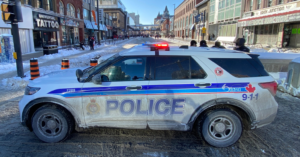 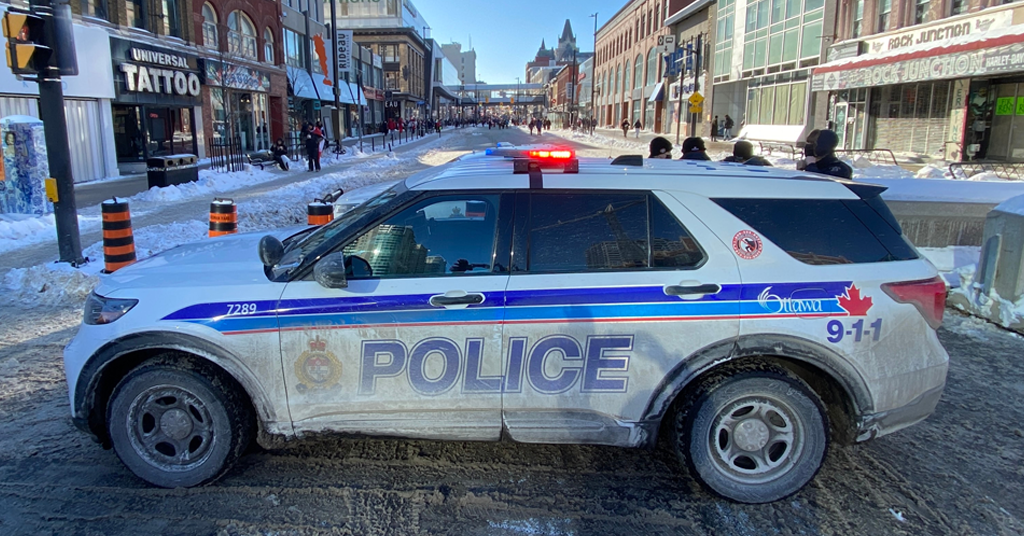 Ottawa Police relied on dubious sources of information and  made politically-biased statements in an internal intelligence report days before a massive policing failure caused the so-called “Freedom Convoy” to spiral out of control.

“There are increasing numbers of spontaneous protests against regimes globally concerning COVID-19 restrictions,” the Ottawa Police intelligence report states. “The success of global protests on the subject of vaccine mandates, etc. creates a sense of efficacy, a sense that one’s actions actually have an impact.”

The report describes other protests as “repetitive” with the “same players, same chants,” mocking left-wing activists who “glue themselves to something, waiting for the same old supper hour news shows and write-ups in hard-left handbills, blogs and undernourished Twitter feeds.”

“A real protest springs up with something close to spontaneity and with tremendous suddenness enlists hundreds of thousands, even millions,” the Ottawa Police intelligence report concludes. “The convoy appears to be this sort of protest.”

Large portions of this section of the Ottawa Police intelligence assessment appear to lift language in verbatim from a January 24 National Post column by Rex Murphy, but fails to attribute Murphy as the author of those lines of text. 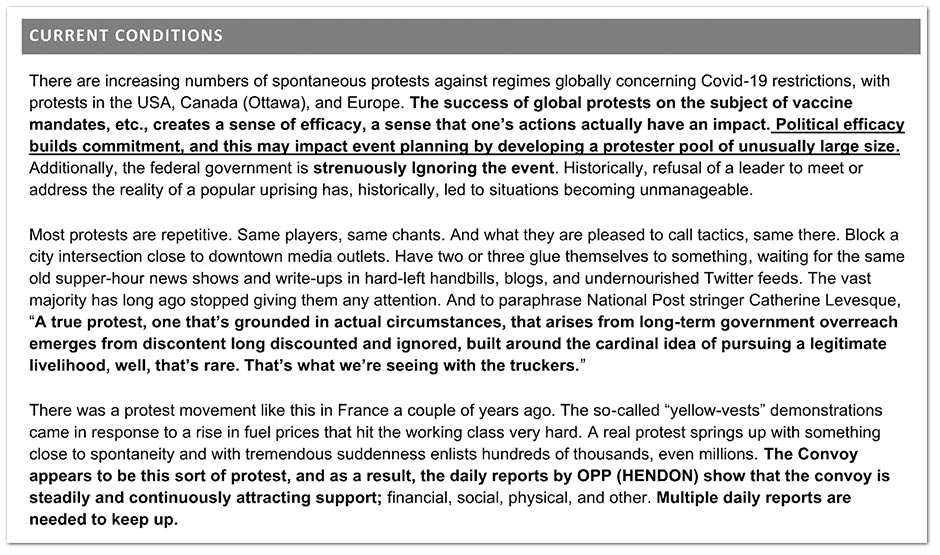 “Even if we forget about this guy’s very obvious bias, it doesn’t even perform the thing it’s supposed to do,” Carvin told PressProgress.

The intelligence report, which Carvin said is supposed to provide an assessment of the threat posed by the convoy, relies heavily on Rex Murphy’s opinion column as one of its only sources of information about “current conditions” within the convoy.

The report describes Murphy’s opinion column, which expresses sympathy towards the convoy, as “open-source” intelligence:

“There appears to be (sources: open-source media and social media reporting) a powerful manifestation of deep discontent with how people feel they are being governed. Discontent with authority may slumber for a long while. As per pundit Rex Murphy: ‘Resentment over the hypocrisies of officials and politicians can daily wear at the patience of citizens’.”

Ottawa Police later relied on the unsourced opinion column as its sole evidence that the convoy consisted mainly of “middle class” Canadians.

“It may spring from a single incident or a single policy, but as political pundit Rex Murphy opined, ‘…It inevitably grows beyond the original trigger event to a large-scale … The middle class don’t go to the woods to attend ‘direct action’ seminars or learn what’s the best glue to work on paved surfaces or pick up tips from an Antifa mob’.” 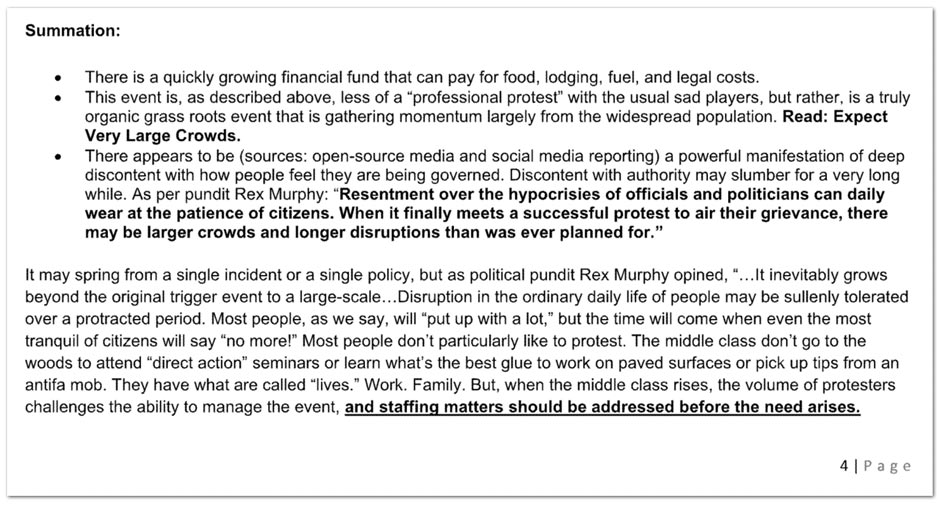 Carvin said it was unclear why Ottawa Police thought an unsourced Rex Murphy opinion column had any value as an intelligence source.

“I don’t know why this person chose Rex Murphy other than this person, while engaging in editorialization, seems to have chosen sources that support his worldview and its not an objective assessment.”

Later in the intelligence report, Ottawa Police describe convoy supporters as the “silent majority” while deriding left-wing community activists as “professional activists” singling out one activist by name who has been critical of Ottawa Police in local media:

“The protests globally are made up almost entirely of middle-class members of society. Since the so-called ‘silent majority’ is numerically much larger than the professional activists, such as local Sam Hersch can order up.”

“The protests globally are made up almost entirely of middle-class members of society. Since the so-called ‘silent majority’ is numerically much larger than the professional activists, such as local Sam Hersch can order up” pic.twitter.com/VINRmrrLnX

Sam Hersh, a local Ottawa community activist, said he was disturbed to learn that his name appeared in an Ottawa Police intelligence report.

“It’s very disturbing but not surprising to see that the Ottawa Police are targeting particular individuals for their activism around police accountability,” Hersh told PressProgress.

“This puts into question their neutrality when it comes to things like the police budget and whether they are deliberately targeting left wing activists.”

“Was this person reflecting institutional biases? There’s been a lot of concern expressed by the community that Ottawa Police have not taken the far-right seriously.”

“I think there are people in the Ottawa Police who are keenly aware of their open-source failures, but I think the concern is that so much of what seems to have happened with regards to the use of intelligence and open-source during this operation is that it was personally-driven and there’s no culture of integrating information and intelligence into operational planning.”

“OPS’ intelligence unit was under-staffed” and “its primary focus was criminal intelligence, although it also tried to gather intelligence on protests,” Lucas states. “OPS does not have a dedicated social media monitoring team.”

During testimony, Lucas hinted members of the Ottawa Police intelligence unit may have been sympathetic to anti-vaccine and anti-public health messages.

“Part of the context to this, knowing the writer of this and knowing the people involved, part of the challenge is the topic of mandates, the restrictions, vaccinations, is an extremely divisive topic,” Lucas noted.


Editor’s Note: This story has been updated to note that additional lines of text in the January 25 Ottawa Police intelligence assessment were taken in verbatim from Rex Murphy’s January 24 National Post opinion column without attribution.