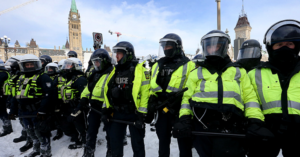 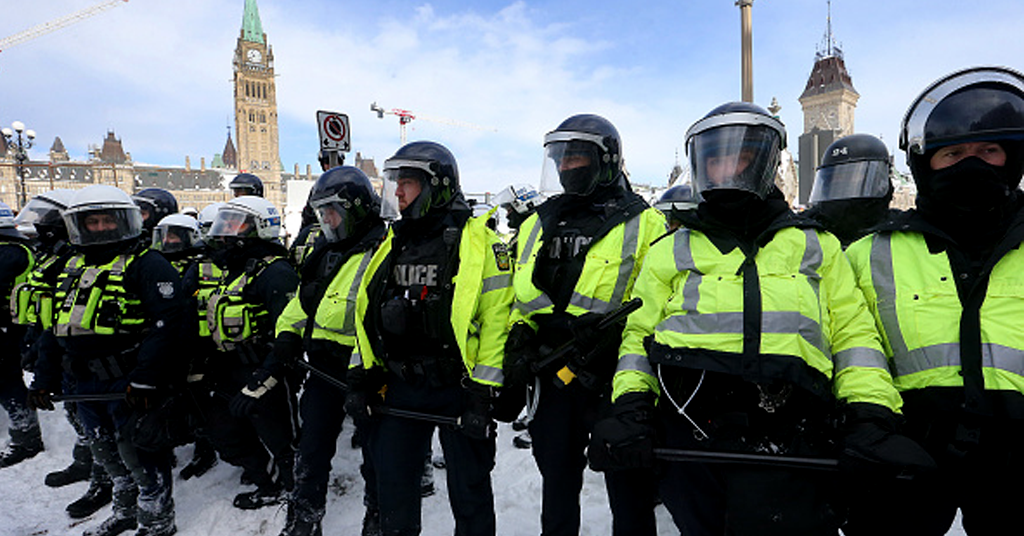 Ottawa Police allowed the so-called “Freedom Convoy” to spiral out of control following numerous breakdowns caused by disorganization and a toxic workplace culture inside the Ottawa Police Service.

That’s the suggestion of a growing body of evidence entered into the public record at the Public Order Emergencies Commission following a week of testimony from top city and law enforcement officials.

The Commission, which was triggered automatically by law and is tasked with reviewing the federal government’s decision to invoke the Emergencies Act, has now heard testimony from several witnesses who keep saying the same thing: Ottawa Police were disorganized and unable to complete basic policing tasks during the convoy because they were too busy fighting with one another.

One senior Ontario Provincial Police officer testified it was clear as early as Day 2 of the convoy occupation that Ottawa Police had lost control of the situation and found themselves in a “state of confusion.”

“OPS officers … were cursing and swearing and … yelling orders at each other and partner agencies,” states OPP Supt. Craig Abrams’ witness statement. “OPS was clearly struggling to determine what its operational plan was.” 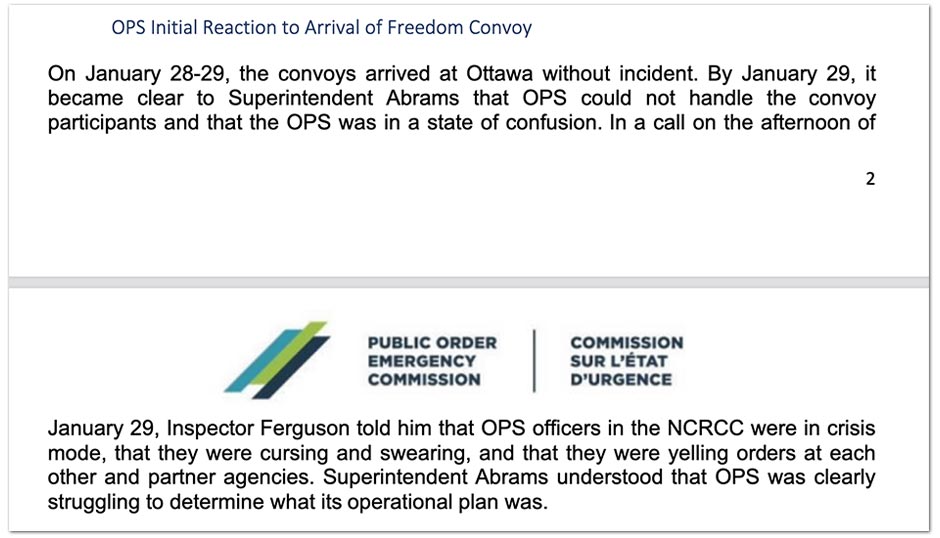 A planning document prepared by a group of partner police agencies, including the RCMP and OPP, later observed Ottawa Police had “no clear direction,” operated under an “unclear and vague command and control” and made decisions that were “not intelligence led.”

Diane Deans, a local city councillor and former police board chair, testified that the Ottawa Police response to the convoy went sideways due to “significant infighting within the OPS which impacted operations.”

As one example, Deans’ witness statement notes Chief Sloly told her Ottawa Police had mobilized 400 officers for an operation to clear occupiers from a key downtown intersection, but the “operation was called off because of infighting.”

“The infighting was constant, but there were some flare ups, especially when the incident commander changed, which happened four times during the demonstrations,” Deans states.

“There seems to be an intent to use this crisis to undermine the chief further,” Deans said.

In 2020, following a viral video of an Ottawa Police officer stopping a Black motorist, Sloly published an op-ed in the Ottawa Citizen pledging to address systemic racism and racial profiling inside the OPS.

“We know we need to do more and must do better to address racial profiling and all aspects of discrimination in policing,” Soly wrote. “We are not perfect people, nor are we a perfect organization.”

The Ottawa Police Association later issued a statement accusing Sloly of having “failed the leadership test” for attempting “workplace change on race relations.”

Deans testified that Chief Sloly “faced racism from within the OPS and from the larger community as Ottawa’s first Black police chief” and was “perceived as an outsider by some factions,” including “the police association, some rank and file police officers and some elements of the Ottawa community.” 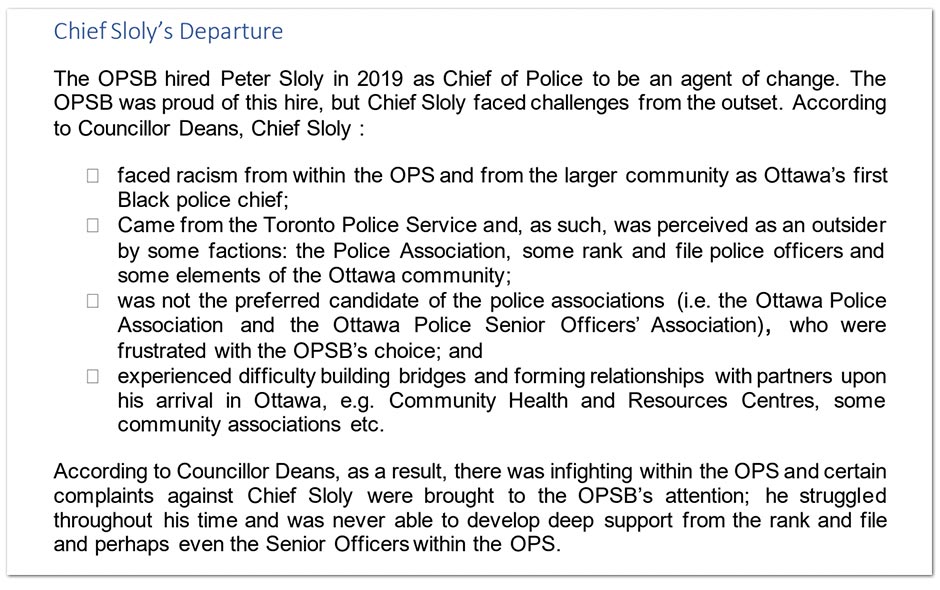 Chief Sloly’s trouble developing “deep support from the rank and file and perhaps even the Senior Officers within the OPS” may have been a contributing factor to the most significant breakdown in the entire convoy ordeal.

One of the biggest unsolved mysteries has always been why Ottawa Police were caught off-guard by what was heading their way in the first place.

Deputy Chief Ferguson testified Ottawa Police were taking the kinds of preparations they might take for a special event or an Ottawa Senators game, explaining their “initial planning focused on traffic management and not so much on public order.”

Despite Chief Sloly’s belief that the convoy would leave after the first weekend, OPP intelligence reports were indicating the opposite.

One OPP intelligence report, dated January 20, stated that convoy supporters do not have an “exit strategy for departing Ottawa” and that their “intent appears to be to remain in Ottawa until all COVID-19 related mandates and restrictions are lifted.”

“We continue to to identify indicators to support at least some protesters remaining beyond the weekend of 2022-01-29/30,” states a January 28 OPP intelligence report. “The available information indicates that the protesters plan to remain in Ottawa at least until 2022-02-04.”

A January 25 OPP intelligence report states that “available information suggests that elements within the convoy, or supporting the convoy, could engage in actions that pose a public safety threat,” adding that the OPP was monitoring “online rhetoric advocating violence or implying the use of violence.”

According to Deputy Chief Ferguson, who was in charge of police operations, the Ottawa Police intelligence unit failed to proactively share intelligence about the convoy with police leaders.

In a witness statement, Ferguson said the Ottawa Police Intelligence Directorate was “not forthcoming with information” and that they had “challenges with the dissemination of intelligence information related to the Freedom Convoy.”

Ferguson said she “did not learn of the existence” of OPP intelligence reports about the convoy “until February 4-6,” a week and a half into the convoy occupation. 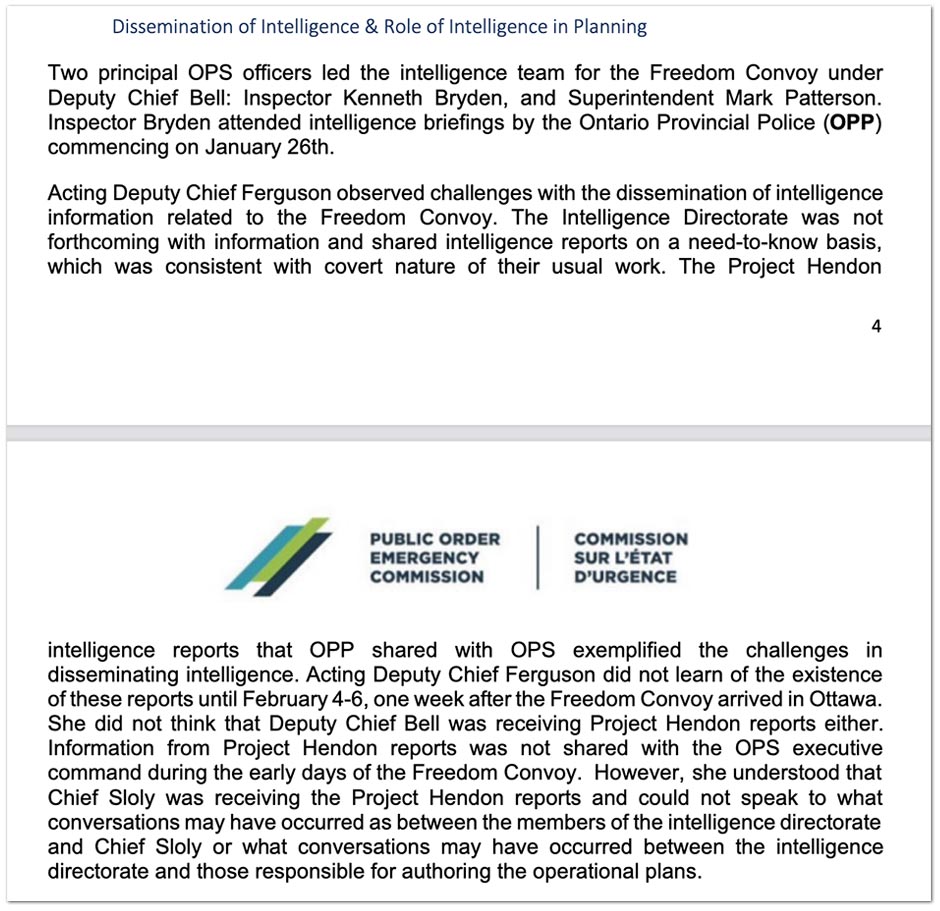 Pat Morris, head of the OPP’s Provincial Operations Intelligence Bureau, testified that he had concerns that OPP intelligence about the convoy “was not being appropriately translated into operational action by the OPS.”

“Morris also noted that it was not always immediately apparent to him that the OPS members participating in the Hendon calls understood the gravity of the situation by January 21,” Morris’ witness statement adds.

Morris said this surprised him because the OPP had been sending Ottawa Police intelligence reports for years.

A week into the convoy occupation, the OPP says Chief Sloly requested they re-send him two years worth of intelligence reports (including ones about the convoy).

This surprised the OPP because they’d been sending Ottawa Police these intelligence reports for years. pic.twitter.com/adeZqlbFNg

Despite acknowledging it had been aware problems inside the Ottawa Police were impacting their ability to respond to the convoy, the OPP has struggled to explain why it did not do more or alert provincial officials.

Deputy Chief Ferguson testified Chief Sloly believed he was being sabotaged by a “conspiracy that is happening at the federal and provincial level,” while a former top OPP officer testified Sloly claimed “there were people in the (provincial) Ministry that wanted him to fail.”

Deans later testified that the allegations related to Chief Sloly “yelling at people” and behaving like a “tyrannical dictator.” Deans said the allegations “clearly came from within the service” and that Sloly explained there had been “infighting that was occurring inside Ottawa Polce.”

Deans testified the “problems in the senior command” went further, noting “Deputy Trish Ferguson had gotten caught up with some of the wrong elements,” and was sent “home for a number of days, which was in the middle of a crisis.”

A week before the convoy arrived, Ottawa Police released a workplace assessment that concluded workplace harassment, including sexist and racist discrimination, is widespread inside the Ottawa Police Service.

“Interviewees described a state of affairs that included sexual violence, harassment, discrimination, and intolerance, as well as a workplace rife with gossip, cliques, and disrespectful behaviour,” the report stated.