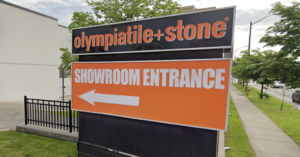 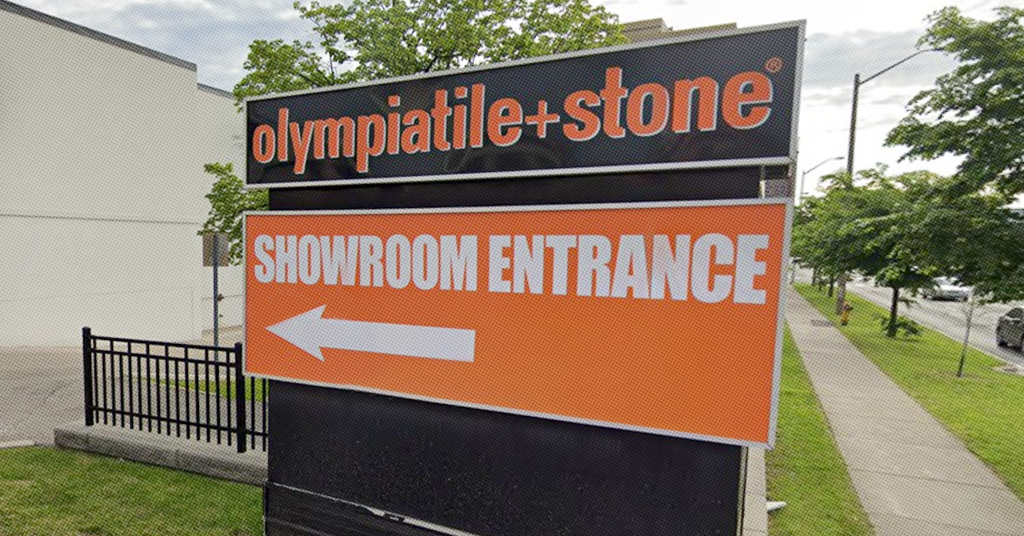 A former Olympia Tile accountant alleges in a new lawsuit that they were fired after they failed to provide a doctor’s note confirming they were experiencing symptoms associated with COVID-19.

The accountant, who spoke to PressProgress on condition that his name not be published, said he began working at Olympia Tile in 1991 and served the company for 29 years until he began experiencing symptoms on March 13, 2020.

“I had symptoms of the virus and I was calling to use my sick time,” the accountant told PressProgress. “I was very ill with all the symptoms.”

The accountant filed a statement of claim in September alleging he was wrongfully dismissed and said the company has been late in filing its defence. None of the allegations contained in the statement of claim have been tested in court.

The accountant’s statement of claim indicates that his “symptoms included body ache, lost taste/smell, fever, chills, no appetite, cough and cold.” It also notes several of his Olympia Tile co-workers tested positive for COVID-19, including one who ended up on a ventilator and another warehouse worker who died.

His statement explains that he never obtained a doctor’s note proving that he had symptoms consistent with COVID-19 because he was not “feeling well” and it was also “at the height of the COVID pandemic.”

It adds that he “didn’t want to pester busy doctors for medical notes nor expose himself and/or other to further health complications in the course of having to obtain one for administrative purposes.” 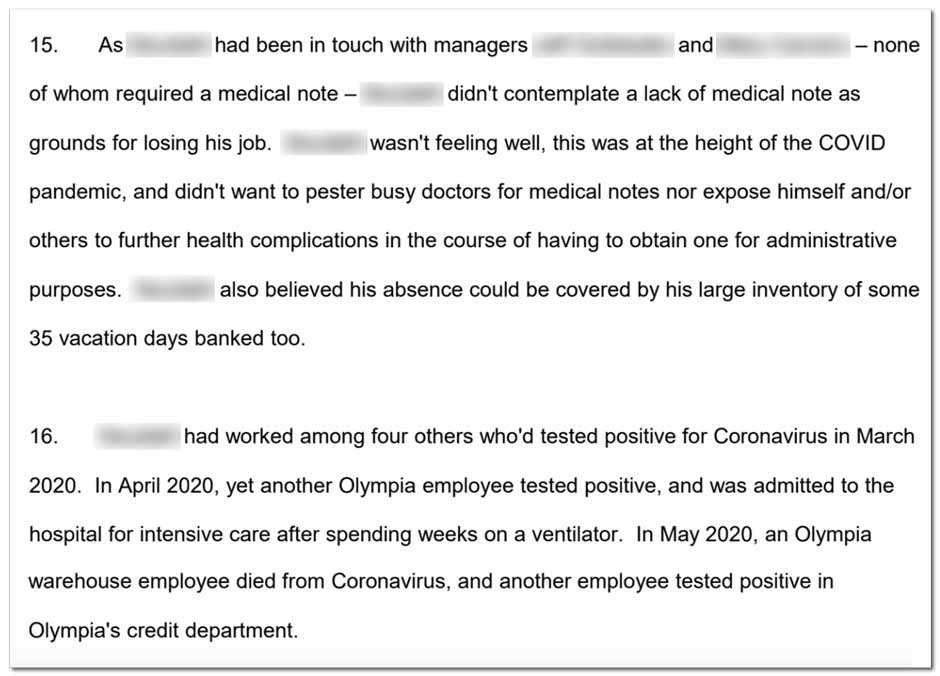 A week and a half after he first called in sick, the accountant claims Olympia Tile’s HR person told him he was “temporarily laid-off” and should “apply for government benefits.” Several days later, he says he was called back to work, but “explained he was still sick.”

The worker’s statement of claim says he wanted to “self-isolate” out of concern for his health and the health of his co-workers, so he used all of his available sick days and offered to use his vacation days.

While he claims a number of managers “wished him a speedy recovery” and told him to “return once he’d fully recovered,” the accountant says the company’s HR person contradicted his managers and demanded he provide a doctor’s note.

However, in correspondence with the company’s lawyer, the accountant was told the company disputes the accountant’s claim that they informed them they were suffering from COVID-19 symptoms.

The lawyer also noted that one of the managers whom he alleges told him to come back when he was healthy was shortly after “placed on a temporary layoff.”

“Olympia Tile was never notified that (the accountant) was afflicted by COVID-19 symptoms,” the company’s lawyer states. “Never once did he mention a COVID-19 diagnosis, symptoms relating to COVID-19, nor did he raise any concerns about COVID-19 exposure in the workplace.”

The company acknowledged that it repeatedly demanded a doctor’s note and that a number of workers did test positive for COVID-19.

But the company’s lawyer insisted that the accountant was “on leave when the individuals in question tested positive for COVID-19” and that he “did not work in close proximity to those infected.”

The letter summed up the company’s position:

Accordingly, on May 14, 2020, he was notified that his employment was terminated due to job abandonment.” 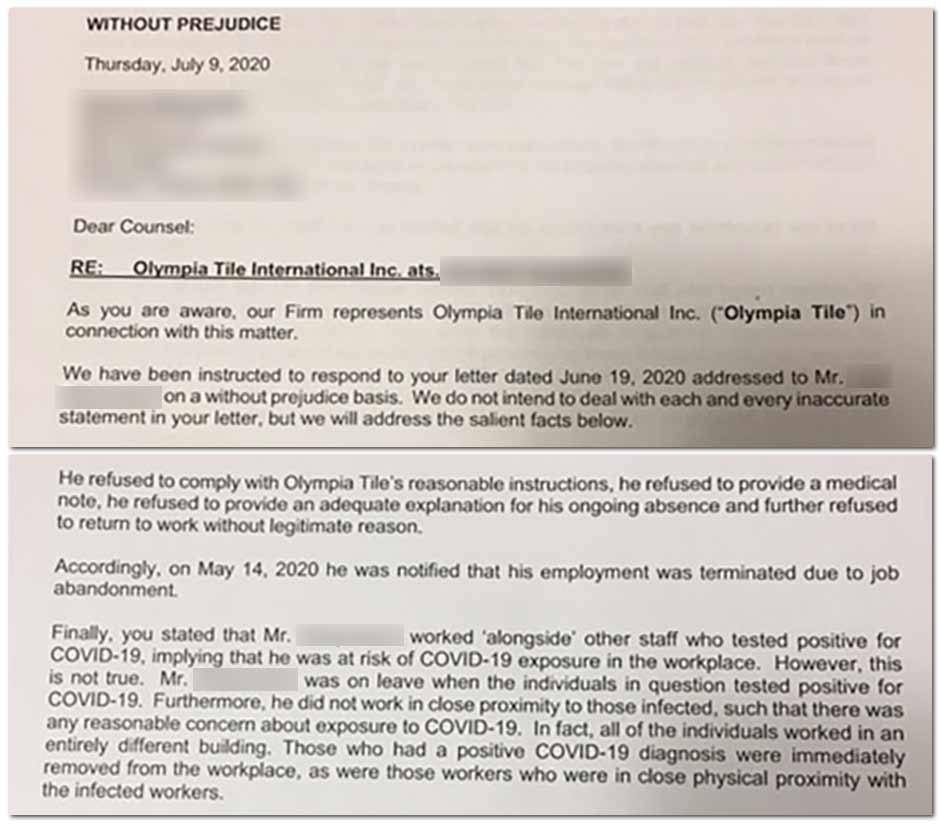 Olympia Tile declined to provide comment for this story.

The company’s HR person also declined multiple requests for comment and later hung-up after PressProgress attempted to interview them by telephone.

Back in March, during the early days of the pandemic, Ontario Premier Doug Ford promised to introduce legislation banning employer’s from requesting doctor’s notes during the COVID-19 pandemic in response to reporting from PressProgress about Tim Horton’s requiring workers to prove they were sick.

Despite this, Ford’s legislation may not protect workers who are sick or concerned they may be symptomatic for more than two weeks.

“Based on just the employers letter, the employee did not provide a reason for the absence and did not comply with the request to provide a medical note confirming the inability to work,” University of Guelph business professor Nita Chhinzer told PressProgress.

“Job abandonment is when an employee is absent from work without cause.” Chhinzer said. “One of the primary considerations is if the reason for the absence was reasonable.”

Chhinzer noted that while Ontario’s currently allows workers to take Infectious Disease Emergency leave without a medical note, it may come with an implied time limit.

But health professionals  argue that HR and legal departments are wasting time and draining resources from the healthcare system expecting doctors to produce administrative records.

“Sick notes are an inappropriate and unnecessary burden on our healthcare system,” Dr. Kate Hayman of the Decent Work and Health Network told PressProgress.

“Getting a sick note requires my patients to leave home while sick, travel in their community, and pose a preventable risk in a clinic or waiting room,” Dr. Hayman added.

“What they should be doing is resting so they can recover and return to work healthy.”