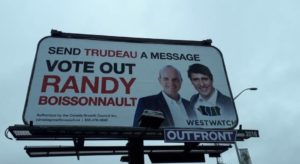 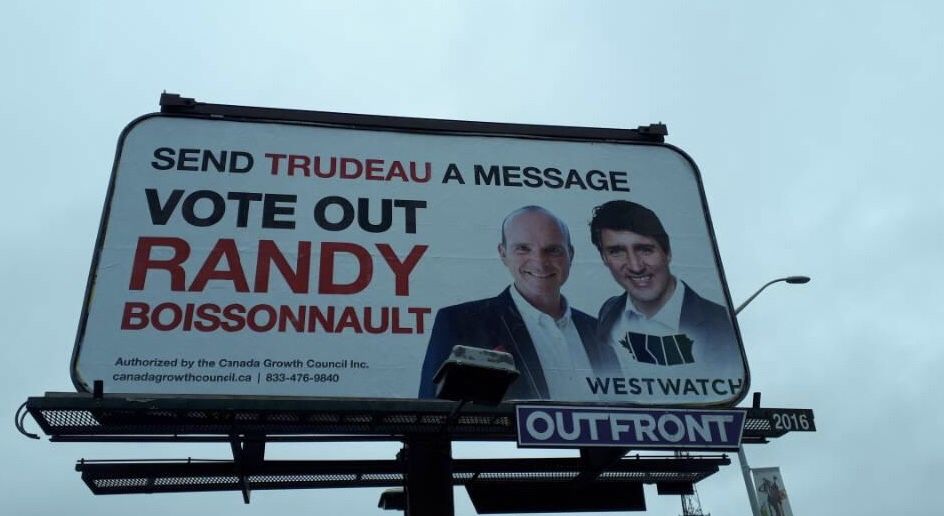 CGC filed an interim report with Elections Canada, reporting $15,000 from only two donors

WestWatch, a political advertiser headed by Saskatchewan Party insiders and donors, is targeting Alberta’s non-Conservative MPs, with a billboard campaign, ahead of the Federal election.

We are now taking aim at more @liberal_party MPs. They’ve sold out Alberta by supporting the carbon tax, voting for anti-pipeline legislation, & doing whatever @JustinTrudeau says.

If you want to send Trudeau a message and vote them out, sign here >> https://t.co/4BNWhpk0KY pic.twitter.com/T4QrCHsiFz

As PressProgress reported previously, WestWatch is a project of the Canada Growth Council. The CGC was founded by Saskatchewan party insiders and donors. They also appear to provide much of the funding for the council.

As of July 2, the group had filed an interim financial disclosure with Elections Canada. It claims $10,872.50 in expenses from $15,000 in donations.

The group’s top known donor is E. Craig Lothian. Lothian is listed as the President and CEO of the energy company Keystone Royalty Corp and chair of Lex Capital Management, a private equity firm in Regina ⁠– he gave $10,000 to the campaign.

Lothian told PressProgress he began supporting the campaign after feeling ignored by the Liberal government.

“Ralph refused to meet with either myself, or with my business partner, Dean Popil, CEO of Lex Capital Management Inc. Clearly, he wasn’t interested in hearing from his constituents” Lothian said.

Lothian said, further, as a result of pipeline delays and other federal energy regulations, “Ralph Goodale and his Liberal government have cost me millions of dollars in the past 3+ years.” Feeling snubbed, he told PressProgress, he decided to put his efforts towards unseating the minister and the governing party.

And the Regina Leader Post reported Lothian was appointed by the Wall government as one of the founding directors of Enterprise Saskatchewan. The Post noted that came after his “companies donated a combined $8,330 to the Saskatchewan Party.”

The interim Elections Canada disclosure also shows an additional $5,000 was given to the CGC by a company held by board-member Eric Clark. 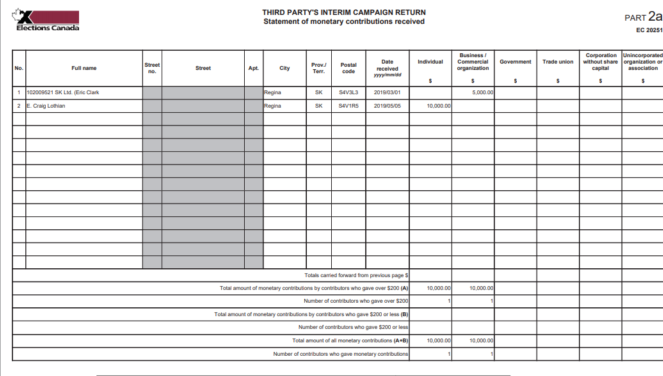 Corporate filings show several CGC board members, including Clark, have ties to the Saskatchewan Party:

Filings also show the address CGC incorporated at is that of Kanuka Thuringer LLP, a Regina-based law firm that represents natural resource companies. The firm also donated $23,200 to the Saskatchewan Party in  2016.

Correction: This story has been updated to clarify that Mr. Lothian was appointed to Enterprise Saskatchewan, not the Saskatchewan Party.