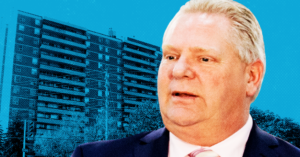 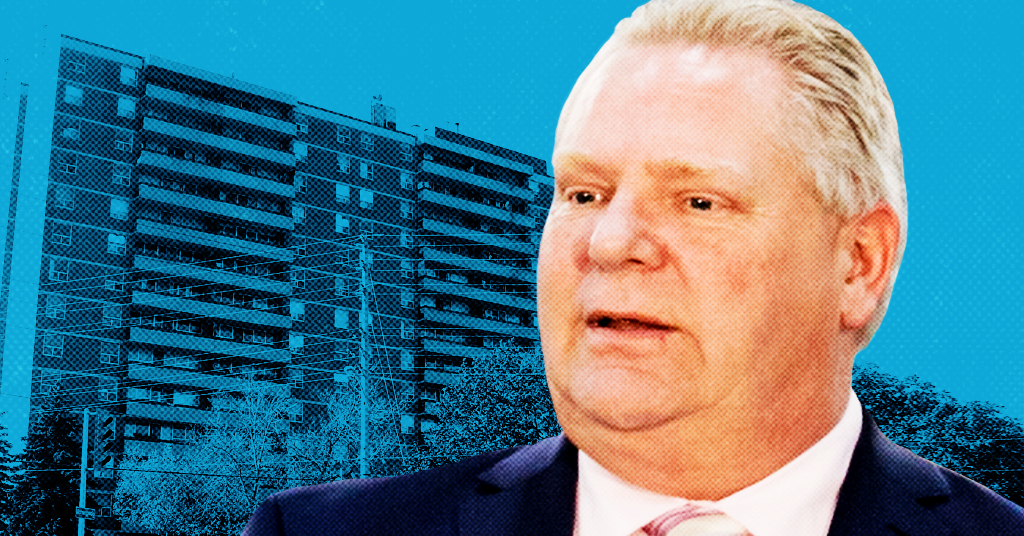 One of the lobby groups promoting the Ontario government’s efforts to make it easier for landlords to evict tenants receives funding from a public crown corporation.

The Federation of Rental Housing Providers of Ontario (FRPO) is a lobby group representing landlords in Ontario, promoting a policy agenda that includes opposing rules around appealing evictions and expanding rent control exemptions for landlords.

FRPO is also one of the groups behind a push for changes to eviction rules. As the Toronto Star recently reported, the Ford government is considering changes to speed up evictions by slashing wait times for evictions notices and allowing landlords to use private bailiffs to remove tenants from their homes.

While legislation hasn’t been drafted yet, Ford’s government says it wants to “streamline the process,” claiming it could boost Ontario’s rental housing supply.

Considering the landlord lobby group wants to raise rents and make it easier to evict tenants, it might seem strange that the group receives some funding from the Canadian Mortgage and Housing Corporation, a federal crown corporation that is supposed to promote “affordable” housing.

“CMHC exists for a single reason: To make housing affordable for everyone in Canada.”

Angelina Ritacco, CMHC’s director of outreach, confirmed to PressProgress that the crown corporation has given the landlord lobby group thousands of dollars as part of a multi-year corporate sponsorship deal.

“FRPO is one of our many stakeholders nation wide,” she said, explaining that the sponsorship has more to do with “the fact they are are a stakeholder and it was deemed as a valuable relationship to get our information out, a channel for us to communicate.”

“We need a channel to their members.”

Sponsorship with FRPO has many benefits including exposure and visibility, year round marketing activities at our largest events as well as recognition of your support of the rental housing industry.

Ritacco stressed the annual $5,000 isn’t meant to “endorse” the group’s policies, adding “CMHC is national, so we don’t really get into the weeds in local politics.”

“Our goal is to build rental housing and if they’re seen as the vehicle to have that happen,” then the CMHC will “try to get their members to build affordable housing.”

Asked about the landlord group’s relationship with the crown corporation, FRPO president Tony Irwin told PressProgress “CHMC is a bronze-level sponsor, however, we don’t share specific details regarding sponsorships.”

He added: “FRPO played an active role in their National Housing Strategy sessions that they held to gain input from the industry.”

Other corporate sponsors include NorthEdge Properties, Yardi, Rogers and Enbridge.

A look at Ontario’s Lobbyist Registry also finds FRPO, and its registered lobbyists, had six listed communications since July 2018. The communications reports list ministers’ offices and ministries as their lobbying targets.

“It would be important to find out if they are working with anyone else, like tenant groups,” Dent said, noting $5,000 could go along way in helping his group assist tenants facing evictions.

CMHC confirmed to PressProgress it does not sponsor any groups that advocate for the interests of tenants.

“There’s a built in incentive to evict,” Hulchanski told PressProgress.

“You can only raise rent once a year and by a certain percent. But, if you evict them? You can charge whatever you want.”

“So, it’s in their interest to loosen eviction rules and evict more, especially in gentrifying areas,” he said.

Dent agreed, noting Toronto is “the middle of a homelessness crisis” and “the fact that the government is even considering making evictions easier is ridiculous.”

In the past 18 months, over 140 homeless people have died in Toronto.