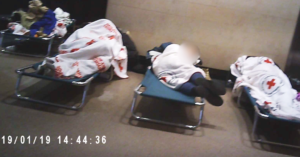 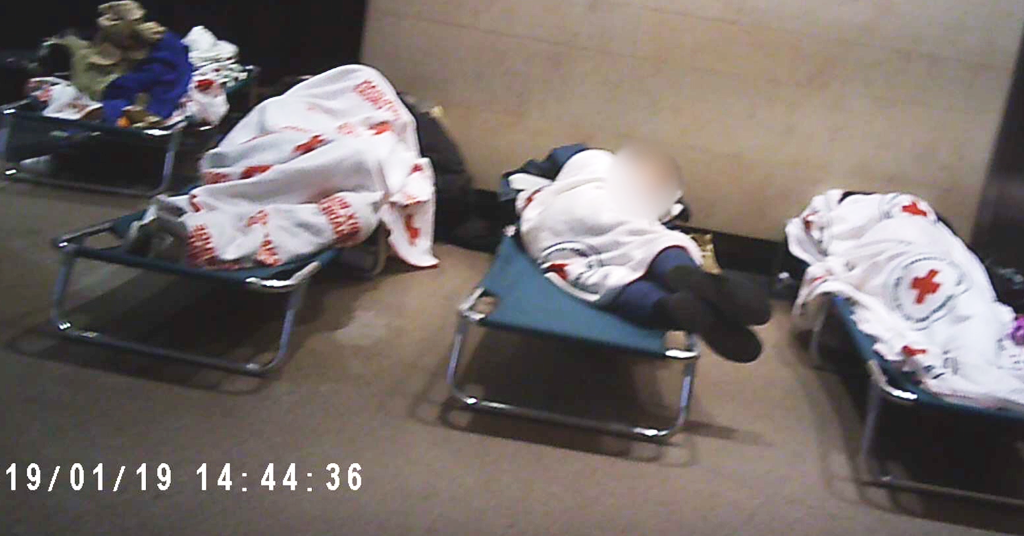 Data from the City of Toronto shows occupancy at local shelters and overnight centres has been above its 90% limit for years.

Advocates note that overcrowding and dangerous living conditions at Toronto shelters has contributed to a crisis that has taken the lives of over 140 homeless people in the last 18 months.

That’s why many are calling on the City to start treating conditions at shelters as an emergency situation.

On January 23, 2019, Daily Shelter & Overnight Service Usage looked like this:

With the exception of the overflow motel rooms for families, every type of facility was operating above the standard 90%.

Cathy Crowe, street nurse and Visiting Practitioner at Ryerson University, was there when Toronto City Council voted on 90% shelter occupancy as the maximum threshold.

Crowe told PressProgress: “We took secret video footage inside the shelters back in the early 2000s. We went to city hall and did presentations and I even took the medical officer of health and the manager of shelters to see the conditions. They did nothing.”

But, when the footage was released,  Crowe said “it shocked people so much. It showed four people sleeping on the floor in the space one person should be allocated, according to the United Nations standard for refugee camps.”

But Crowe added that “the city has never once met that standard. We’ve rallied and brought it to their attention again in 2013. They passed a mention re-affirming that 90% was the goal.”

Yet, Joyce Rankin, clinical manager at Street Health told PressProgress the city still failed to meet its refugee-camp target, set and re-affirmed again and again. “We need flex in the system and we have none. These city-made targets are never met.” 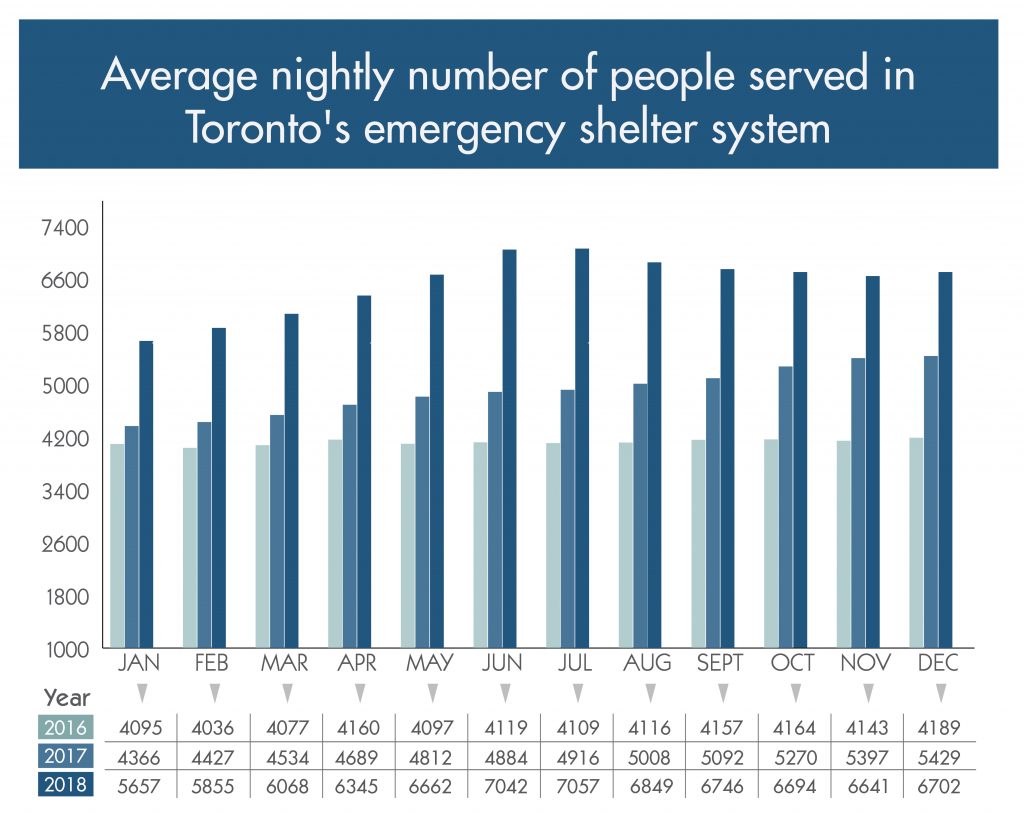 Courtesy of the City of Toronto

For example, the listing of motels is an overflow service and its count is off. “The motels are not officially part of the shelter system, that’s the overflow. And that means that if a motel room could accommodate five people but there are only three there, it changes the numbers.”

The effects can be seen in video shot Jan. 19 in three large locations across the city, obtained by PressProgress and view-able, in full, below.

“It very much is like a scene after a natural disaster,” Crowe remarked to PressProgress.

“It’s very crowded. I think the thing that shocked me the most at all three locations is the number of people with wheelchairs and walkers. You see very old people and very young people. And you see people who are quite ill,” Crowe told PressProgress.

“In one facility we see two toilets out of order, two operational, for a facility of 100. You see people very close together and taped lines on the floor showing the amount of space each person is allocated and people having to keep their belongings on their cot because there are no storage facilities,” Crowe said.

Lest we think the conditions seen in the video are unrepresentative of the whole, Rankin says this is a common reality in Toronto’s almost universally overcrowded shelters.

“People have no privacy. They are packed like sardines, shoulder-to-shoulder. Their things go missing and they are coughing and sneezing on each other. People get respiratory illnesses, tuberculosis, bed bugs and more. They are packed in and forced together and it is dehumanizing,” Rankin told PressProgress.

Things are  similar in the warming centres. Crowe notes that previously, they were opened during cold and heat alerts but now they are more regular and, Rankin notes, increasingly they are bursting at the seams. “The warming centres are full. The people looking for shelter are literally spilling out into Sherbourne and Dundas.”

The city’s data shows that, on Jan. 23, most of the city’s nine respite sites was full, while both its drop-in centres operated at, in one case, and above, in another, capacity.

This week, city council heard four homeless people have died so far this month. Crowe told PressProgress another two are likely to be confirmed.

City data shows that from January 2017-June 2018, the last month for which data is available, around 145 homeless people died in Toronto.

“Shelter overcrowding absolutely contributes to the risk of death among people experiencing homelessness, particularly when people are experiencing other challenges, such as disabilities or mental health difficulties,” Dr. Kaitlin Schwan, senior researcher for the Canadian Observatory on Homeless told PressProgress. “It is very challenging to navigate the shelter system when it is not at full capacity, and when it is overcrowded it can mean people spend their days and nights traveling all over their city seeking help, only to be turned away again. If you are struggling with health challenges, experience language barriers, or simply can’t afford transit, you quickly run out of options. ”

Advocates have been pushing for data from the last six months to be released but Crowe notes even the startling 140 figure is probably conservative, judging by the names on the Toronto homeless memorial and the fact that hospitals don’t generally report which of its patients are homeless.

Advocates have been pushing for the city to declare homelessness in Toronto a state of emergency. That would require the mayor take action and report it back to council within 24 hours, the Globe and Mail noted.

But Toronto mayor John Tory, CBC reported, said he would rather focus on “long-term solutions.”

“You can attribute all of the deaths to homelessness. I’ve never had a patient die of old age. The average death age is between 49-58. That’s not normal,” Crowe told PressProgress.

Rankin likewise notes “an explosion in the devastation we all see,” but wonders “why managing it falls to the non-profits and volunteer sector?”

“We have a very wealthy and prosperous country and yet we leave these people,” Rankin said.

Toronto has, according to the Fred Victor Centre, around 9,000 people who are homeless. Though a large number, it is not so large for a city which, the Huffington Post noted, has enough empty homes for over 100,000 people.