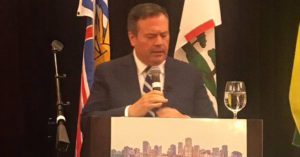 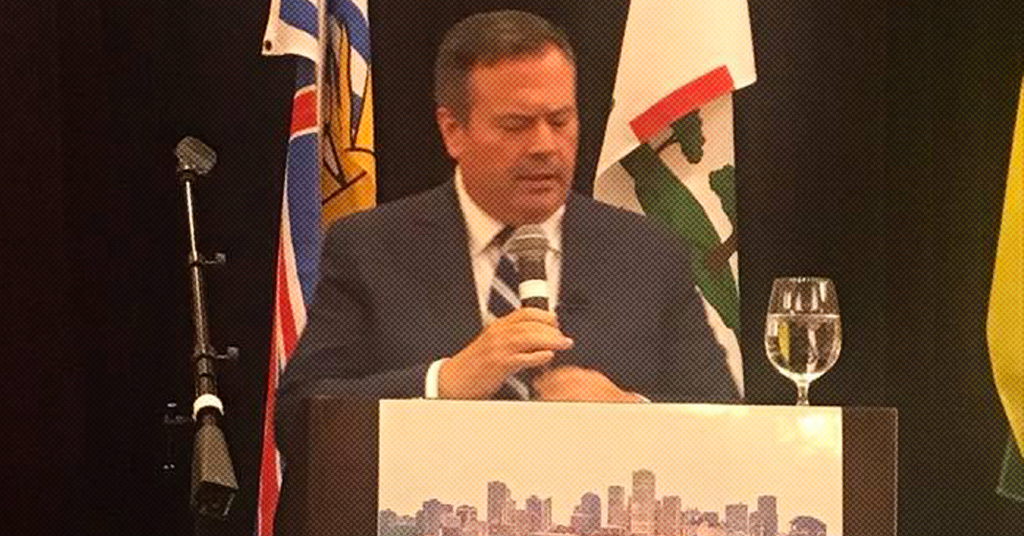 While one sponsor helped shape UCP education policy and is now campaigning for the repeal of a law protecting students in gay-straight alliance clubs, another provides students with learning material that denies evolution, claims sea monsters are real and suggests humans traveled to the moon 4,000 years ago.

Last month, the Canadian Centre for Home Education welcomed Kenney as its keynote speaker for the closing banquet of the 2018 National Home Education Conference in Edmonton. 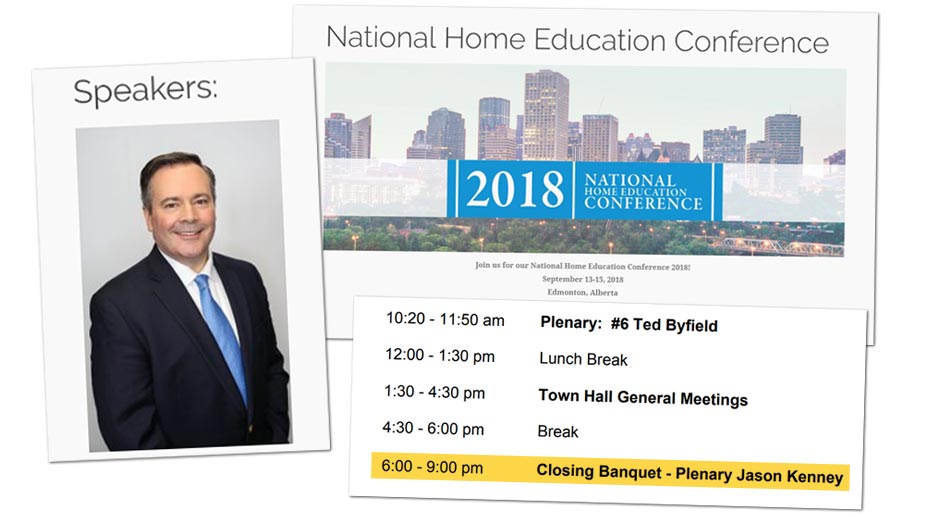 The CCHE promoted the event as an opportunity to “hear from leading experts and connect with others around key issues facing homeschooling across our nation,” however, the event’s agenda suggests it’s more about “Christian political activism” than the 3 Rs.

Strangely, Kenney’s appearance at the event appears nowhere on either Kenney or the UCP’s website and social media channels.

Luckily Maureen Gough, UCP candidate for Sherwood Park, was also at the event and managed to shoot a few photos of Kenney delivering his keynote speech. 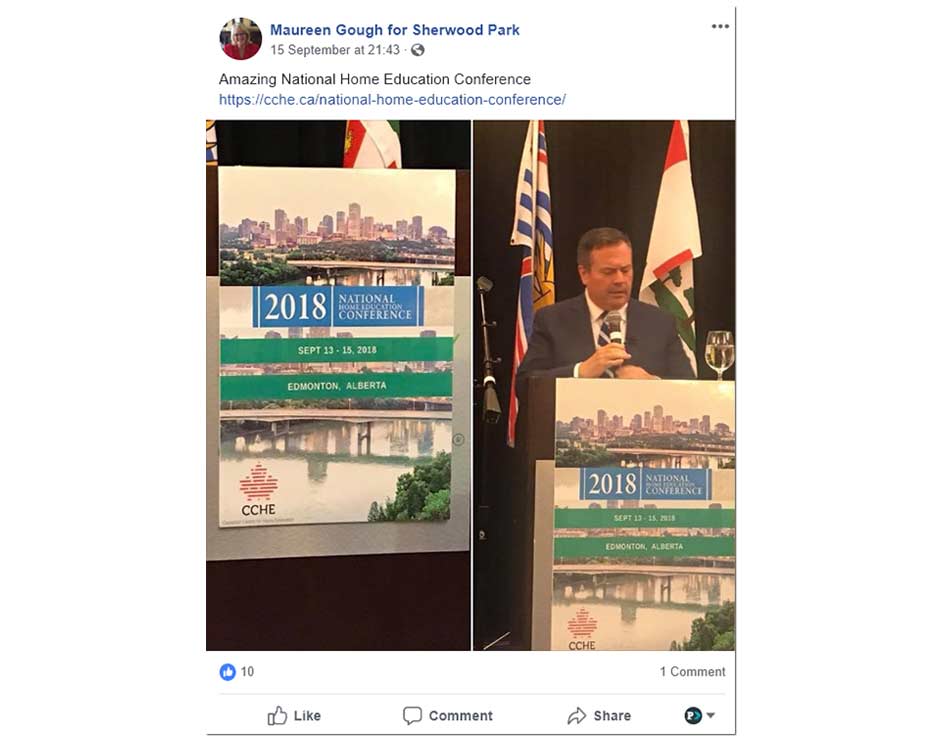 While no video exists of Kenney’s speech at the conference, a video from a similar event in Red Deer last year shows the UCP leader asking social conservatives to financially support groups that are working for the “promotion and advocacy of homeschooling.”

In other words, the same kinds of groups that the event listing shows sponsored the same conference Kenney headlined last month in Edmonton:

Although the sponsoring groups variously present themselves as private education companies or industry associations, a closer look at the groups shows they’re rooted in far-right political activism and promote highly dubious educational materials:

The Alberta Home Education Association is currently running a campaign against Bill 24, which grants privacy and protections for students who join gay-straight alliances. In fact, the group is currently encouraging its supporters to contact Kenney directly and voice their opposition to the GSA bill.

The AHEA also has close ties with Kenney’s party – in a recent post, the organization congratulated its activists for influencing the outcome of votes on education policy at the UCP’s AGM.

The Home School Legal Defence Association is run by Peter Stock, a failed Conservative candidate who founded a far-right group called Canada Family Action, which declares itself opposed to the “homosexual agenda.”

UCP MLA Nathan Cooper, another alumni of Canada Family Action, made headlines last year when it was revealed he hosted a CFA podcast promoting an author who helped draft a Ugandan law making  homosexual acts punishable by death.

According to Xtra, Stock once claimed same-sex marriage is more destructive than “STD rates, teen suicides, drug abuse, gang activity or school shootings,” adding that the “disintegration of the natural family” would lead to “anarchy.”

Another sponsor of Kenney’s event was Wisdom Homeschooling, a group that made headlines after it was shut down by the province in 2016 over allegations of fraud, including “financial irregularities” and misuse of public education dollars.

Former students of Wisdom, which provides resources for homeschooling parents, also raised questions about its credibility as an educational organization. After her application to the University of Calgary was denied, Wisdom graduate Bari Miller told CBC News the group teaches dubious lessons about science:

“I really didn’t learn any science that would be acceptable to a lot of Canadian universities … I was told that evolution didn’t happen, and just a lot of things that I think didn’t prepare me for the real world or for university.”

I dug out some of my “tests” from high school courses under WISDOM homeschooling. Interpret these as you will. pic.twitter.com/cUWKWGzRP9

One of Wisdom’s history courses teaches that the fall of the Roman Empire was caused by “widespread homosexuality among the upper classes” which “led to a decline in the birth rate among aristocrats, thereby reducing the available pool of leadership manpower.”

• “Cadborosaurus: Survivor from the Deep,” a book Wisdom calls a look at a “very rare and controversial marine species.” The cadborosaurus is actually a mythical sea monster.

• “Fingerprints of the Gods,” a pseudoarchaeological book that attempts to prove the existence of an advanced pre-historic civilization in Antarctica. It was cited as the inspiration for Hollywood director Roland Emmerich’s apocalyptic disaster film “2012.”

• “Dead Men’s Secrets: Tantalising Hints of a Lost Super Race,” which Wisdom describes as a “catalogue of astounding ancient technology (space travel, nuclear war, etc).” Among other topics, the book claims “prehistoric man” travelled to “the moon in 2309 BC.”

Another sponsor called Classical Conversations is a company headquartered in the United States focused on providing education resources for homeschoolers.

The group’s website includes articles from fringe educators who claim: “biology should be taught in an unashamedly creationist manner.”

The final sponsor, Education Unlimited, is an organization affiliated with a private school based in Spruce Grove, Alberta. 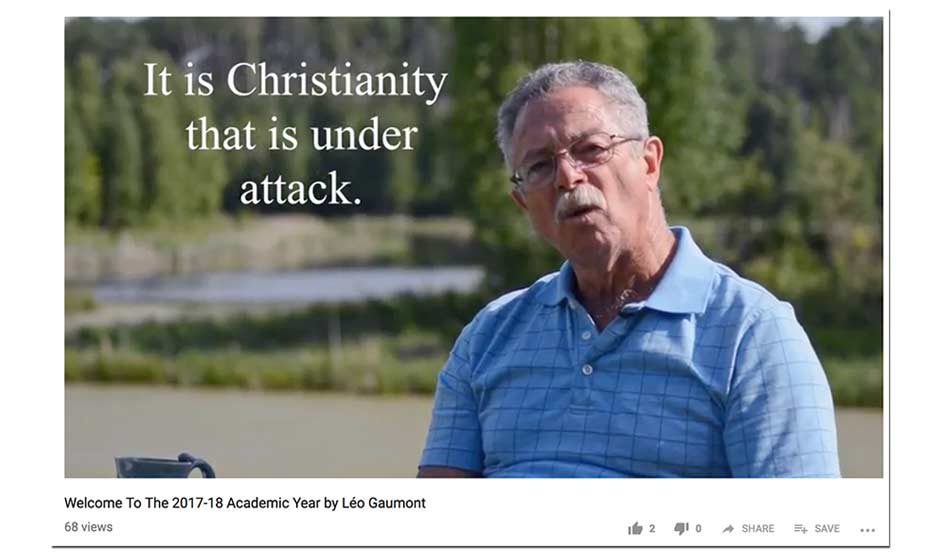