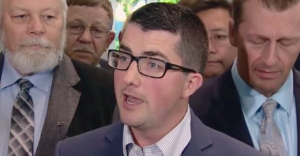 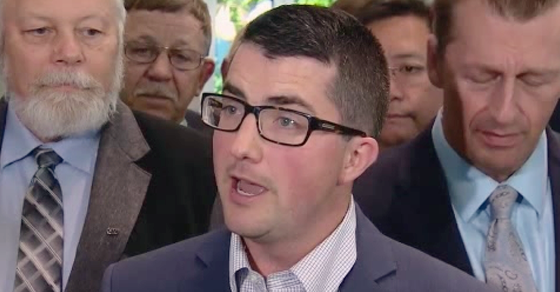 But Nathan Cooper, whose allegiances previously lay with the now defunct Wildrose Party, once worked for a social conservative group that promoted controversial views on a so-called “homosexual agenda.”

Cooper was chosen as interim leader of the new party Monday afternoon after members of Alberta’s Wildrose and Progressive Convervatives voted to merge this weekend.

Before leaping into electoral politics in 2015 after serving in the party’s backrooms as Caucus Chief of Staff and Director of Legislative Affairs, Cooper served as spokesperson for a group called Canada Family Action.

During his time with the group, Cooper generated eyebrow-raising headlines following a 2011 press conference in Ottawa that saw Stephen Harper’s Conservatives denounced for allegedly being soft on child sex crimes.

A news story from my trip to Ottawa for Canada Family Action http://tinyurl.com/4tofjkp

One of Cooper’s first duties after coming on board in 2009 as “assistant to Brian Rushfeldt,” Canada Family Action’s President, was to host an online “blog talk radio” show called “Family Action Radio.”

Canada Family Action’s promotional materials describe it as a “half hour blog talk radio show” exploring “many issues facing the Canadian family,” including interviews with “some of Canada’s most influential social conservative thinkers.” Audio of Cooper’s “talk radio blog” have since been removed from the group’s website, but archived copies of the site suggest Cooper’s show sometimes veered into controversial topics.

On a July 2009 episode of the show, Cooper was “pleased” to speak with Scott Lively, author of the book “Redeeming the Rainbow: A Christian Response to the ‘Gay’ Agenda.”

Cooper’s audience was promised a “must listen” interview.

In the book’s introduction, titled “Why the homosexual agenda should concern every Christian,” Lively calls Christians “gullible” and compares them to “sheep among wolves,” before accusing “unrepentant homosexuals” of unleashing “destructive” forces on “Western Civilization”:

“The ‘gay’ goal for society is to replace Judeo-Christian sexual morality (monogamous heterosexual marriage and the natural family) with an alternative moral system that embraces ‘sexual freedom’ … We have watched the destructive consequences of ‘sexual freedom’ unfold in Western Civilization for many years now without recognizing the ‘gay’ movement as its driving force. Now the church must wake up to the reality that the so-called ‘culture war’ is, more than anything else, a contest between the opposing and contradictory philosophies of activist homosexuals and Christians.”

Even today, the page on Canada Family Action’s website offering links to additional resources features a photo of Cooper at the group’s press conference in Ottawa along with a link to Lively’s website – which Canada Family Action describes as a good resource “for parents and citizens regarding homosexual agenda.”

Elsewhere on the website, the group criticizes “homosexual radicals” for their “intolerant and ignorant” opposition to unscientific gay conversion therapies – “why do they fear people returning to normal heterosexual relationships?” they ask.

But Cooper’s bosses at Canada Family Action also have a well-documented record speaking out against the “gay agenda.”

In 2010, CFA President Brian Rushfeldt and Board member Charles McVety led an attack on changes to Ontario’s sex-ed curriculum, with Rushfeldt suggesting the move was aimed at corrupting children:

“They want to make society believe that two men and two women having sex is normal.”

In 2007, Rushfeldt also slammed the NHL and Toronto Maple Leafs for their “promotion” and “attempt to normalize homosexual behaviour” after they approved the use of their logos in a movie about a gay hockey player.

One year earlier, the Canada Family Action President told a US-based Christian news service that the decision to film “Brokeback Mountain” in Alberta was a “deliberate” move to punish the province for its “conservative values” and “support of heterosexual marriage:

“Rushfeldt is convinced the makers of the film deliberately targeted his province. “It’s interesting that they would have chosen Alberta to film [Brokeback Mountain] in,” he shares. “I think that was a deliberate move on the part of some of the homosexual activists and some of the directors from corrupt, immoral Hollywood.

“I think it was purposely done in this particular province because of our conservative values and our recognition of support of heterosexual marriage.”

Likewise, Rushfeldt and McVety have complained to Senate committees that films that “proselytize children to be homosexuals” should be denied government tax credits.

Despite these efforts, McVety’s show on Crossroads Television was cancelled by the Christian broadcaster in 2011 after he denounced Toronto’s Pride parade as a “sex parade” and falsely claimed the event’s advertising “promoted sex with children.”

The newly formed United Conservative Party will select a permanent leader in October.