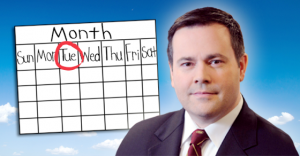 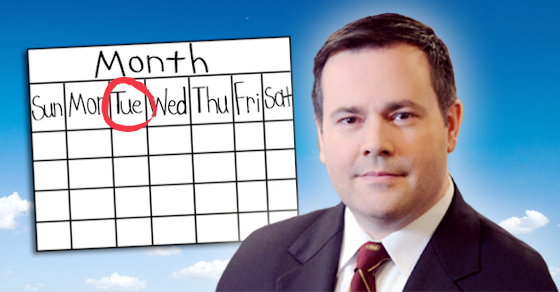 Think you're having a bad week? At least your name isn't Jason Kenney.

Think you’re having a bad week?

Hey, things could be worse – for example, your name could be Jason Kenney.

Here’s the Coles Notes on what’s getting the PC leadership candidate down this week:

• In a stunning revelation, Alberta’s Wildrose Party leader Brian Jean announced there was a “targeted” break-in at the party’s Edmonton headquarters. Jean says computer were stolen and personal data appears to have been “obtained by organizers in another party.”

• Kenney says allegations that he was personally involved are “paranoid conspiracy theories.”

• In the process of defending himself, Kenney accidentally raised questions about whether he built a database containing 60,000 names with personal info collected as an MP – causing a former Deputy Premier from Kenney’s own party to question whether the PC leadership candidate broke the law?

• One of Donald Trump’s senior advisors will be holding a fundraiser on behalf of a pro-Kenney super PAC.

Now here’s a more detailed version of what already happened to Kenney this week.

On Sunday, Jean sent an e-mail to Wildrose supporters concerning the “party’s data security” and “the unauthorized use of Wildrose membership data,” revealing Wildrose’s “party office in Edmonton was targeted in a break-in” earlier in November:

“I also want to update you on matters related to our party’s data security.

Some of you have been receiving unsolicited calls and letters from another political party. I do not know how parts of our membership data appear to have been obtained by organizers in another party, but I have directed staff to investigate this and take all necessary steps to further protect our lists. I want to be very clear that the unauthorized use of Wildrose membership data and the protection of Wildrose information are serious matters for me.

A number of weeks ago, our party office in Edmonton was targeted in a break in. Some laptops were stolen and an unsuccessful attempt was made to steal Wildrose’s computer server. We do not believe there was any data released during this incident but we cannot be certain. No credit-card information was contained on any of the missing password-protected laptops. A police investigation is ongoing and since the robbery we have moved our computer server offsite to a high-security location.

I apologize to any of you who may have received unwanted contact from other political parties and, while Wildrose has always safeguarded our data, we will do even more to ensure the integrity of your information going forward.”

According to Jean, these calls falsely claim to speak on his behalf and are “encouraging Wildrose members to buy memberships and influence the leadership vote in the PC party”:

“I’ve heard some concerning reports from some of you that you’ve received unsolicited calls claiming that I am encouraging Wildrose members to buy memberships and influence the leadership vote in the PC party. This claim is absolutely false. I would NEVER ask our members to interfere in the activities of another party.”

Edmonton Police confirm they’re investigating a break-in at the party’s office on November 7. According to other reports, police asked the party to not discuss the break-in publicly in order to assist the investigation.

Although he isn’t explicitly linking Kenney to the break-in, Jean’s e-mail is widely interpreted as pointing to that conclusion – for his part, the PC leadership candidate dismisses those insinuations as “paranoid conspiracy theories.”

Speaking to the Herald, Kenney’s campaign floated the idea that because Wildrose’s database uses NationBuilder, it would be unlikely to gain access to data because data is stored on the cloud, not on computers – one problem with this theory is it’s still plausible those computers could access the cloud, particularly if the computer’s owner uses browser cookies to remember passwords or if they simply forgot to log out of NationBuilder.

On the other hand, Alberta Politics’ David Climenhaga suggests “it’s quite possible the party lists got into Tory hands the old-fashioned way, via a disloyal member” – pointing to the possibility of another brewing Wildrose civil war instead.

Complicating things further, Kenney managed to raise more questions than he answered during an interview with the Calgary Herald when he suggested he’s currently using a “database of 60,000 people” he built while he was a federal MP:

“Kenney also suggests he doesn’t need to steal anybody’s list, even if he wanted to, because “when I entered this I already had a database of 60,000 people who have contacted me over 20 years as a Member of Parliament’.”

As former PC deputy premier Thomas Lukaszuk was quick to point out, if Kenney is actually used personal data collected from people who contacted him through his constituency or ministerial office, that would likely be “illegal”:

Kenney’s campaign quickly tweeted that when Kenney said he had the names of “60,000 people who have contacted” him over his years as an MP, he was talking about names collected from his personal website:

But the fishy thing about that explanation is how that squares with another Kenney controversy from last week.

Conservative supporters had complained that they were receiving letters from Kenney’s PC leadership campaign, despite having never given their personal information to either Kenney or the PCs.

Reacting to suspicions that Kenney may have obtained data from the Conservative Party of Canada, a spokesperson for the federal party was unequivocal, telling the Herald that Kenney is not authorized to use the party’s data:

“Conservative party spokesman Cory Hann said in an email that the party has not shared its membership list with Kenney, noting that ‘the party’s data is just that – the party’s data, and only for the party’s use’ …

Hann said sitting Conservative MPs have access to the membership lists for their ridings, but that ends when they are no longer members.”

Where does all of that leave us?

Kenney amassed a private database of 60,000 names without party resources using only his personal website?

Judging by the layout of jasonkenney.ca between 2011 and 2015, that certainly seems an ambitious feat for a relatively lo-fi website whose unassuming sign-up form is tucked away quietly in a corner: In other news, senior Donald Trump advisor Kellyanne Conway will be hosting a fundraiser for a conservative political group that publicly endorses Kenney and his bid to unite Alberta’s PC and Wildrose parties:

Only three more days until the weekend.