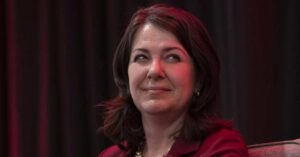 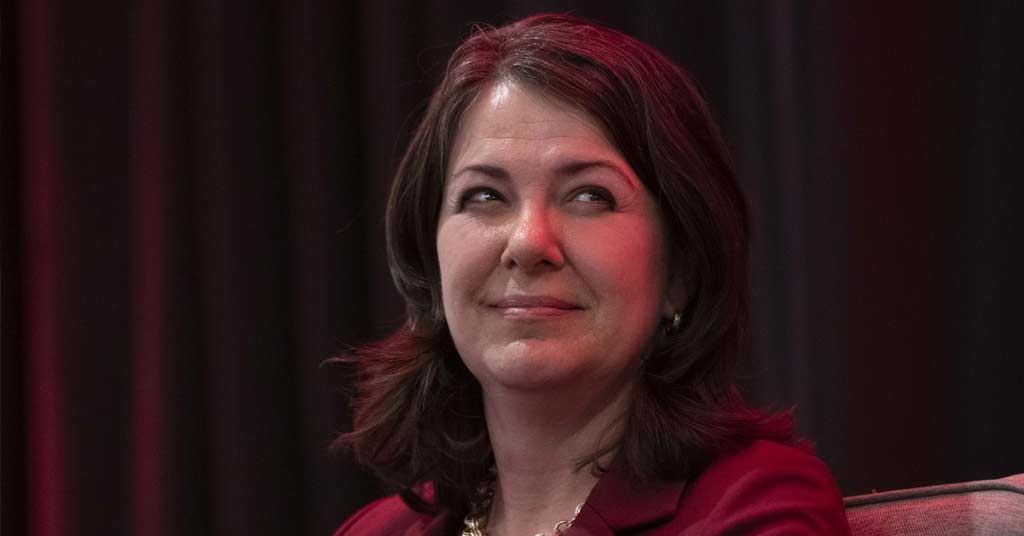 Alberta is gearing up for a provincial election this spring, but right-wing political action groups and third-party advertisers who want to see Danielle Smith and a far-right slate of candidates form government have already begun their work.

Some groups are running TV ads, some post memes on Facebook, while others are organizing behind-the-scenes to take over the governing United Conservative Party itself in the post-Jason Kenney era.

Messaging from the more active groups is a mix of rhetoric about Alberta independence, conspiracies about the pandemic and vaccines, as well as shilling for business interests.

Here’s a look at a few of the groups that are organizing to help Danielle Smith become premier – and what they’re up to ahead of the election this spring.

Take Back Alberta claims it has a membership of 30,000 and credits itself for Jason Kenney’s downfall and Danielle Smith’s subsequent rise to power.

The group, which promotes anti-lockdown views and has ties to with 2022 convoy blockade in Coutts, Alberta, says it now has its guns set on opposition leader Rachel Notley.

“TBA made national headlines when it successfully led the fight to remove Premier Jason Kenney from power after his government imposed the harshest, most restrictive assault on freedom in our province’s history. Now, TBA has set its sights on stopping the NDP and derailing Rachel Notley’s destructive socialist agenda.”

But in the mean time, TBA is working behind-the-scenes to install friendly candidates in UCP nominations.

According to the group’s Telegram channel, the group recently claimed victory for taking over MLA Jason Nixon’s riding association.

TBA founder David Parker posted on Telegram: “Nixon’s entire board has been taken by Tim Hoven and his freedom fighters.”

Hoven previously sought to challenge Nixon for nomination in the riding but was disqualified by the party because he followed a website platform linked to white nationalists in the U.S. Hoven is one of the group’s “regional captains.”

In October, the group claimed victory after electing a slate of candidates to the UCP board at the party AGM. Out of roughly 1800 party members in attendance, TBA claims to have sent 850-900 of its supporters.

Other regional captains include Jarrad McCoy, who protested at the Coutts blockade.

Parker says meetings over the next few months “will be about outlining the plan to stop the socialists from taking power provincially and how we will be taking future steps in order to transform our school boards and municipalities.”

TBA registered as a Third Party Political advertiser on February 2, 2022. Filings show Parker personally donated $12,749 of his own money to the organization.

The organization’s website is virtually identical to that of the Vancouver-based Pacific Prosperity Network, a right wing group funded by the founder of Lulu Lemon, Chip Wilson.

They’re so similar, Take Back Alberta actually lists the Pacific Prosperity Network’s phone number and email address as points of contact on their website — neither organization responded to questions about their relationship from PressProgress. 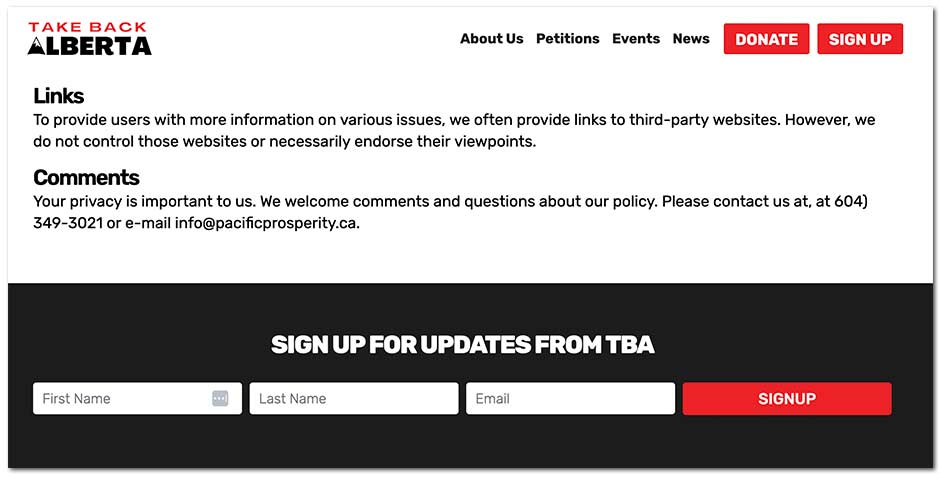 Alberta Proud, a group that mostly posts memes on Facebook and Instagram, has campaigned as a third party advertiser for right wing political causes since 2018.

During the 2019 provincial election, when the Facebook page was solidly pro-Jason Kenney, PressProgress reported the majority of its funding came from two businessmen: Calgary’s Naim Ali and Edmonton’s John Mather.

Since 2019, the Facebook page became part of the Canada Strong and Free Network, a conservative organization that previously operated under the name of the “Manning Centre.”

Hi Euan. I’m not being paid and I did not agree to that promo. I was invited to speak about Canadian energy, my recent travels, and the need for conservatives to step up in social areas. I’ve asked them for a correction. Would love to sit down with you. jeromy@jeromy.ca

Recent content from Alberta Proud has been aimed at attacking “Ottawa elites,” along with anti-Trudeau, anti-Notley posts.

Wilson recently joined Take Back Alberta’s David Parker on his podcast, where he described her as a “general in the meme war.”

“I think the tables have turned. I think we’re starting to see there’s this globalist agenda attacking our oilsands,” Wilson said.

Alberta Proud raised $20,000 in mostly small donations in the first three quarters of 2022, according to Elections Alberta filings.

With a war chest capable of running ads during hockey games, the Alberta First Initiative aims to shore up the UCP base by persuading skeptics of Danielle Smith to continue supporting her.

Catherine Brownlee, who recently replaced Smith as chief lobbyist for the Alberta Enterprise Group, donated $5000. Previously Brownlee worked with Steve Allan, the head of Jason Kenney’s Anti-Alberta Inquiry, whom she describes as a “dear friend and mentor.”

Andrew Goodacre of Red Deer also put up $5000, as did a numbered Alberta company tied to Randy Royer, a former Alberta Party leadership candidate who wrote a book about Alberta sovereignty.