A Green Party candidate says he has no “racist or prejudicial bone” in his body, but he believes focusing on racism is a “distraction” from problems facing “the planet.”

Danny Celovsky, the Green candidate for Bay of Quinte, was referencing tweets sent earlier this year. He admits he wanted to “stop” a discussion about a man who raised a Nazi Swastika flag on his property because the Green candidate wants everyone to “refocus on the priority — life on the planet.”

In a lengthy and at times heated series of tweets, Celovsky introduced himself to Twitter users as “the Green Party candidate in Bay of Quinte, Ontario, Canada,” then advised them to stop talking about “the stupid fascist freaks called Nazis.”

“Fascism is just a distraction,” the Green candidate tweeted.

“We have been led into too many distractions of the issues we face,” he tweeted, telling people to focus on “the problems my kids’ futures face” instead.

When it was suggested he can condemn hate speech and advocate for green policies at the same time, Celovsky replied: “Sorry, no can do.” 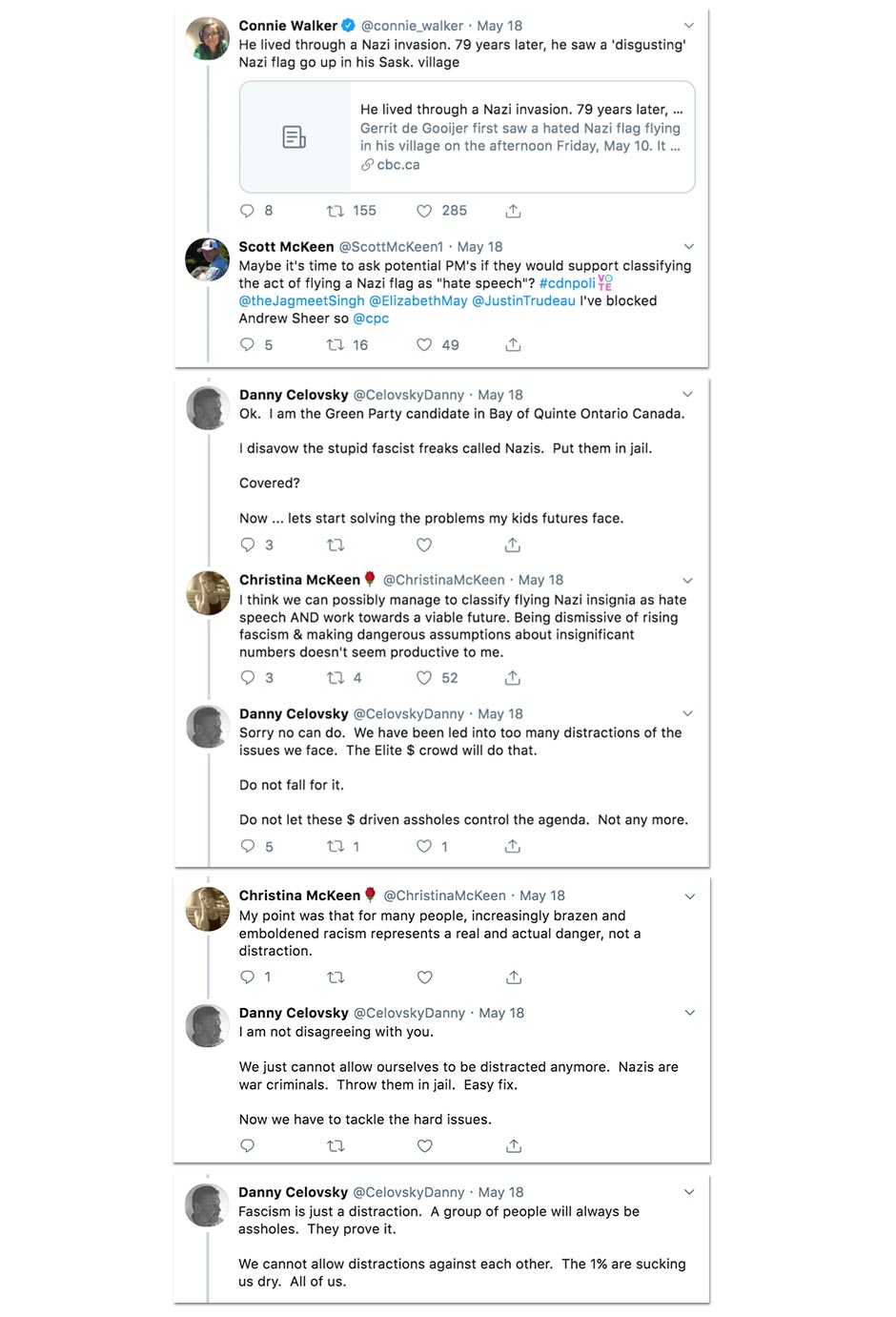 Responding to questions from PressProgress, Celovsky offered his apologies if anyone was offended by his remarks, but reiterated he thinks people “focus too much on distractions made by some that are designed to distract us from the immediate crisis” — “the future of all life on our planet.”

“Those distractions — many focused on dividing us across racial components — are not helping,” the Green candidate emphasized.

“That specific Twitter thread, I considered to be such a distraction,” he explained. “Rightly or wrongly, I reacted by trying to stop the thread itself.”

Celovsky says he holds a sincere belief in “equality and justice across all fronts,” even though he doesn’t care to “focus” on racism.

Green leader Elizabeth May also waded into that topic when she issued a statement this week clarifying “there is no room for any kind of racism or bias within the Green Party of Canada.” A day earlier, the Greens welcomed one defector who left the NDP, in part, because they believed the party’s electoral prospects were weakened by the fact party leader Jagmeet Singh is not white.

The Greens later confirmed several people they initially claimed had defected from the NDP to their party had done no such thing.

A few weeks earlier, May welcomed another defector, former MP Pierre Nantel, who  publicly questioned the “compatibility” of a party leader who wears a turban with Quebec values. May later muzzled her candidates from commenting on Quebec’s controversial Bill 21.

When it was suggested the Greens may have a blind spot on race, Celovsky insisted he personally has “not experienced any racist behaviour in the Party.”

Yet the party and its candidates have a history of problematic views in that area.

Last month, Green candidate Luc Saint-Hilaire resigned after criticizing the leaders of the Quebec City mosque attacked by a far-right white nationalist in 2017.

Monika Schaefer, a candidate for May’s Green Party in 2006, 2008 and 2011, filmed a Holocaust denial video in 2016 claiming the murder of six million Jews by the Nazis is “the biggest and most pernicious and persistent lie in all of history.” The former Green candidate was later convicted of hate crimes by German authorities.

Provincially, Martha Jo Willard, a 2019 candidate for the Manitoba Greens, made a strange gaffe after noting in her bio that she got a job “even though she wasn’t black.”

BC Green candidate Mark Neufeld made headlines in 2017 after delivering a speech at an official Green Party rally imitating Martin Luther King Jr.

Those aren’t the only head scratchers — the party has a checkered track record on so-called ‘social issues’, as well.

In 2015, the party scrambled to delete a section on its website that vowed to rewrite divorce laws so people would not be allowed to divorce their spouse without first establishing wrongdoing, a policy closely associated with men’s rights activists.

The Greens have also stoked confusion by billing their party’s position on abortion as a “pro-life, pro-choice,” a policy that delicately aims to avoid alienating women and the people who wish to strip them of their rights.

Canadian feminist Judy Rebick maybe summed it up best when she condemned Elizabeth May’s position on abortion for trying to “middle ground” on issues where no middle ground can possibly exist.