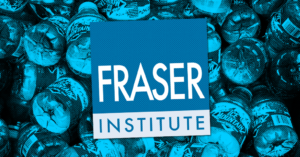 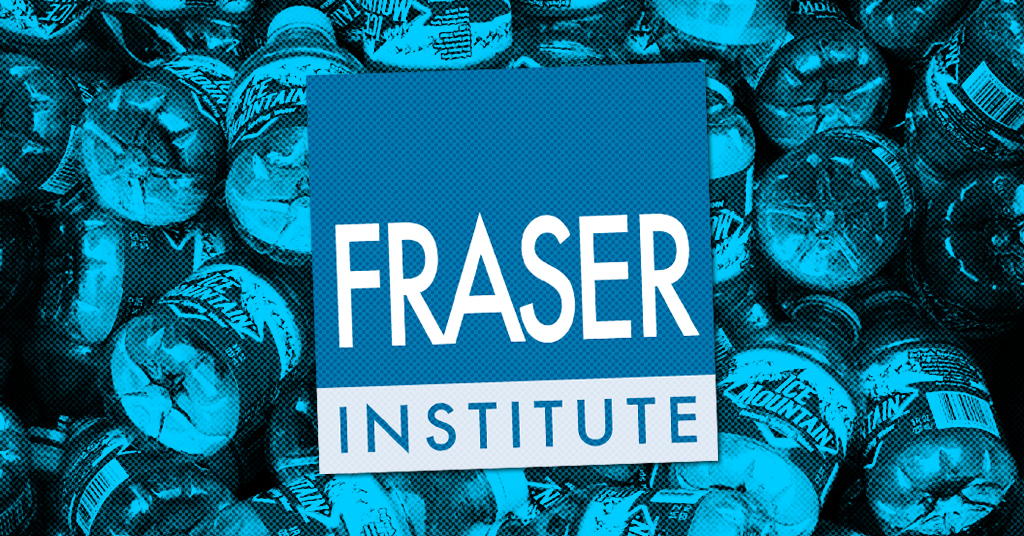 The Fraser Institute has found its silver lining.

But the right-wing think tank has done some deep-thinking and would like to share with the world what it is most thankful for — namely, “plastic waste.”

Warning that many governments are “banning plastic grocery bags,” Veldhuis noted “it is easy to forget that much of our reliance on plastic packaging was motivated by the need for public hygiene.” 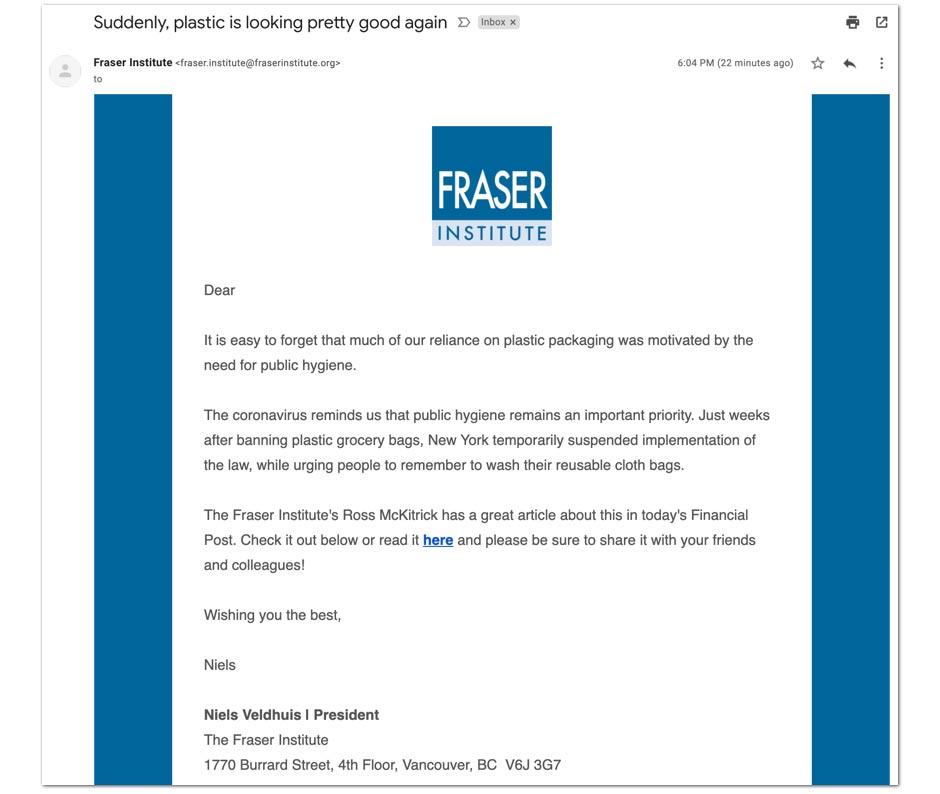 McKitrick is an outspoken climate science skeptic who once signed an evangelical declaration that asserts carbon taxes violate Biblical Law and claims climate change is all part of “God’s intelligent design.”

“We used to get our meat the way we still get most of our vegetables—from open counters. But people grew uncomfortable with the exposure of meat to insects and germs, not to mention the problem if people handle raw meat in one aisle then touch products in other aisles, so stores responded with those little Styrofoam trays with absorbent liners and clear plastic wrap, to which we all soon grew accustomed.

Lots of things got wrapped in cellophane to avoid being touched by other customers … In an age when few people had ever been affected by a pandemic, such considerations receded in importance. Meanwhile stories of garbage filling the oceans led to fears that we are wrecking the planet with our throwaway plastic waste.

In response to such fears, just weeks before the coronavirus hit New York City hard, the New York State legislature banned plastic grocery bags. Then as if acknowledging the connection, the state has temporarily suspended implementation of the law, while urging people to remember to wash their reusable cloth bags.”

Except the Fraser Institute’s claims about the health benefits of plastic bags miss their mark in significant ways.

For one thing, there have been no specific scientific studies looking into whether bags made of any material, cloth or plastic, are actually spreading COVID-19.

Concerns over reusable bags have no relevance to the material of the bag. Unions representing grocery store workers have raised concerns about cashiers touching reusable bags that have not been properly washed or sanitized during a pandemic, though they admit its mostly for the benefit of giving workers “peace of mind.”

But the very same concern would also apply to a reusable plastic bag too. On the other hand, many stores are offering recyclable paper bags as an alternative.

In fact, a recent study found COVID-19 lives significantly longer on plastic surfaces than it does on paper or cloth, a point that would appear to contradict the premise of the Fraser Institute’s argument.

Another thing the Fraser Institute doesn’t mention: US lawmakers are currently being targeted by a coordinated PR campaign led by the plastic industry and a slew of right-wing think tanks funded with money connected to billionaire Charles Koch.

According to Mother Jones:

“The timing of these messages suggests a concerted public relations campaign by the plastic industry. And many of the groups that have picked up these claims, including the Manhattan Institute and Competitive Enterprise Institute, receive support from the Kochs, the infamous family of moguls who made their fortune in the petrochemical industry.”

The Fraser Institute, which is connected to the same US think tanks through the Koch-funded Atlas Network, previously confirmed it has received Koch funding for “years and years.” IRS tax records suggest that number exceeds $1.4 million.

But as Greenpeace noted, many of the studies relied on by the plastics industry actually raise more questions about plastic:

“The irony is that the campaign relied heavily upon studies that found that the virus persisted longer on plastic surfaces than other materials.”

One scientist whose research on reusable bags was co-opted by Big Plastic told Mother Jones he did not approve of the way they used his research: “It’s kind of depressing to see the plastics industry do that.”