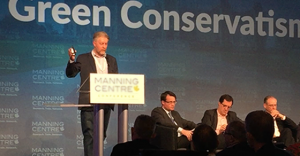 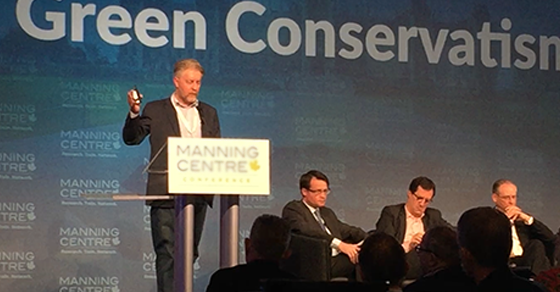 Fraser Institute senior fellow Ross McKitrick urged an audience of conservatives at the Manning Centre Conference to reject the "irrational but popular" idea that "the environment is bad and getting worse."

There were two notable moments in the ongoing fight against climate change this weekend.

The first was Leonardo DiCaprio calling for action on climate change after winning an Oscar for best actor during Sunday night’s Academy Awards:

Leo calls for action on #climatechange during his acceptance speech. #Oscarshttps://t.co/F4yGRbWpqt

And the second notable moment?

That honour goes to Fraser Institute senior fellow Ross McKitrick, who urged an audience of conservatives at the Manning Centre Conference in Ottawa to reject the “irrational but popular” idea that “the environment is bad and getting worse.”

McKitrick – an economist who once signed an evangelical declaration claiming “global warming is one of many natural cycles of warming and cooling in geologic history” and is part of “God’s intelligent design and infinite power” – urged conservatives to defeat “the raft of false beliefs” surrounding climate change science.

But in the spirit of skepticism, here is a short list of beliefs to which McKitrick subscribes:

1. McKitrick claims there is no scientific consensus on climate change

McKitrick, who is not a scientist, claims “slogans” suggesting there is a “97% consensus” among scientists on climate change is “another one of these phony statistics.”

Is that true? Here is what NASA says about that:

“Multiple studies published in peer-reviewed scientific journals show that 97 percent or more of actively publishing climate scientists agree: Climate-warming trends over the past century are very likely due to human activities. In addition, most of the leading scientific organizations worldwide have issued public statements endorsing this position.”

2. McKitrick claims the link between climate change and extreme weather is not a “mainstream” idea

When it comes to “the issue of extreme weather,” McKitrick claims “there is nothing mainstream about that kind of science.”

Yet if the idea is so fringe, why does the United States government’s interagency National Climate Assessment say “extreme weather events are increasing” and attribute this “primarily to human activities”?

“Scientists who study climate change confirm that these observations are consistent with significant changes in Earth’s climatic trends. Long-term, independent records from weather stations, satellites, ocean buoys, tide gauges, and many other data sources all confirm that our nation, like the rest of the world, is warming. Precipitation patterns are changing, sea level is rising, the oceans are becoming more acidic, and the frequency and intensity of some extreme weather events are increasing. Many lines of independent evidence demonstrate that the rapid warming of the past half-century is due primarily to human activities.”

And here is what an Environment Canada report on adapting to climate change – a report that was actually published while Stephen Harper’s Conservatives were in power – says about the issue of extreme weather:

“Extreme weather events are a key concern for Canada and there is growing confidence that some types of extreme events will increase in frequency and/or intensity as the climate continues to warm.

Losses from severe weather have been rising across the country. Extreme events, including storms (wind, ice and snow), flooding and heat waves have had significant economic and health and safety impacts on Canadians.”

McKitrick also says the Intergovernmental Panel on Climate Change (IPCC) “does not draw a connection between greenhouse gas emissions and extreme weather events.”

Here is what the IPCC says:

Observed changes in climate extremes reflect the influence of anthropogenic climate change in addition to natural climate variability, with changes in exposure and vulnerability influenced by both climatic and nonclimatic factors.”

McKitrick also says Preston Manning has brought “public opinion around on some pretty big ideas that needed to change.”

Well, on this point, McKitrick is actually 100% right.

Preston Manning does, in fact, have a track record of working to defeat “bad ideas.”

Here’s one example: Manning has been pushing conservatives to drop the denials on climate change, arguing Canadians “can’t continue to engage in a polarized environment-versus-economy argument.”

And speaking of “bad ideas,” Manning has joined Canada’s Ecofiscal Commission to push for ‘good ideas’ like carbon pricing:

However, Four out of five (80%) of the panelists seemed to be in consensus that conservatives should be taking climate change a little more seriously than McKitrick.