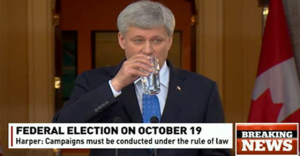 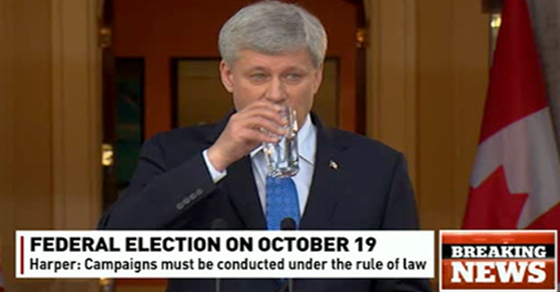 Why is Stephen Harper calling an early election? Not because he's "gaming the system," he just has too much respect for the rule of law.

Why is Stephen Harper calling an early election?

Better yet, why has Harper initiated the longest election in Canadian history since 1872?

According to Harper, it’s not because he’s “gaming the system,” an accusation levelled by former head of Elections Canada Jean-Pierre Kingsley over the weekend. Nor is it because he’s trying to give himself a financial edge and maybe “bankrupt” the opposition parties in the process, as Pundits Guide’s Alice Funke suggested a few months ago.

No, according to Harper, it’s because he has too much respect for the rule of law.

Haven’t heard many Conservatives utter that term since Conservative MP Diane Ablonczy used air quotes back in March to dismiss the “rule of law” as if it were some made-up thing during committee hearings into Harper’s Bill C-51:

If we are to take Harper at his word, a quick record check on how well the Conservatives’ have managed to conduct elections according to the “rule of law” in the past is in order:

Not to mention, an international body will now be monitoring this election in response to concerns over recent changes brought in under the Conservatives so-called “Fair Elections Act.”

At Rideau Hall, Harper went on to add that he feels the money for this election should “come from the parties themselves, not from the government resources, parliamentary resources or taxpayers’ resources.”

Canadians will cast their votes on October 19th.