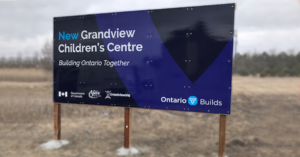 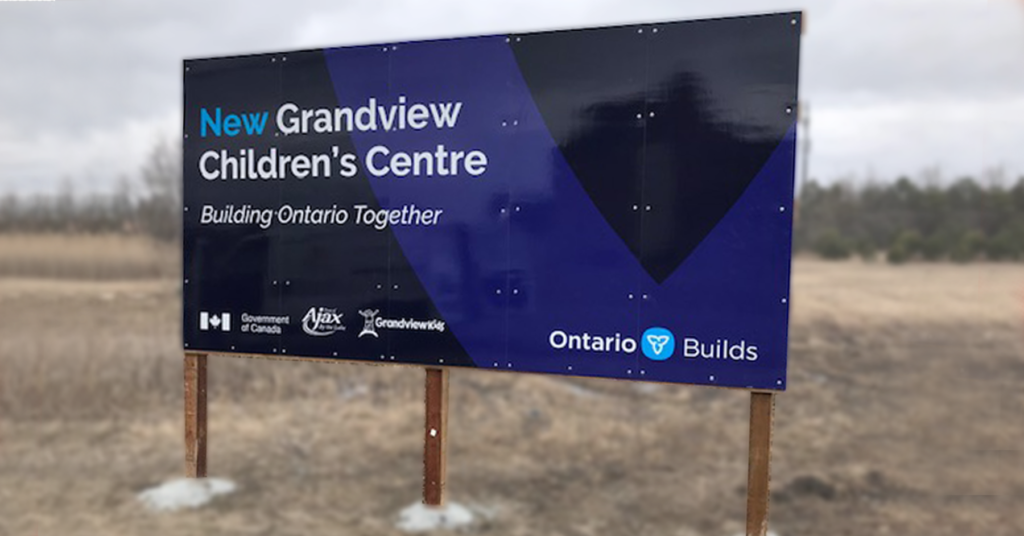 Memo notifies school boards they must cover ‘all expenses’ relating to the ‘design, production and installation’ of the Ford government’s signs

Doug Ford’s Ministry of Education sent Ontario’s school boards a memo informing them that they will be paying the full costs for signs to promote the government’s school construction projects, something they haven’t done in the past.

But a recent memo from the Ministry of Education to the province’s school boards notified boards that they must display signs advertising the government’s “financial support” for school construction projects — all at their own expense.

The memo reads: “School boards are required to display Ontario Builds signage at the site of construction that identifies the financial support of the Government of Ontario.” 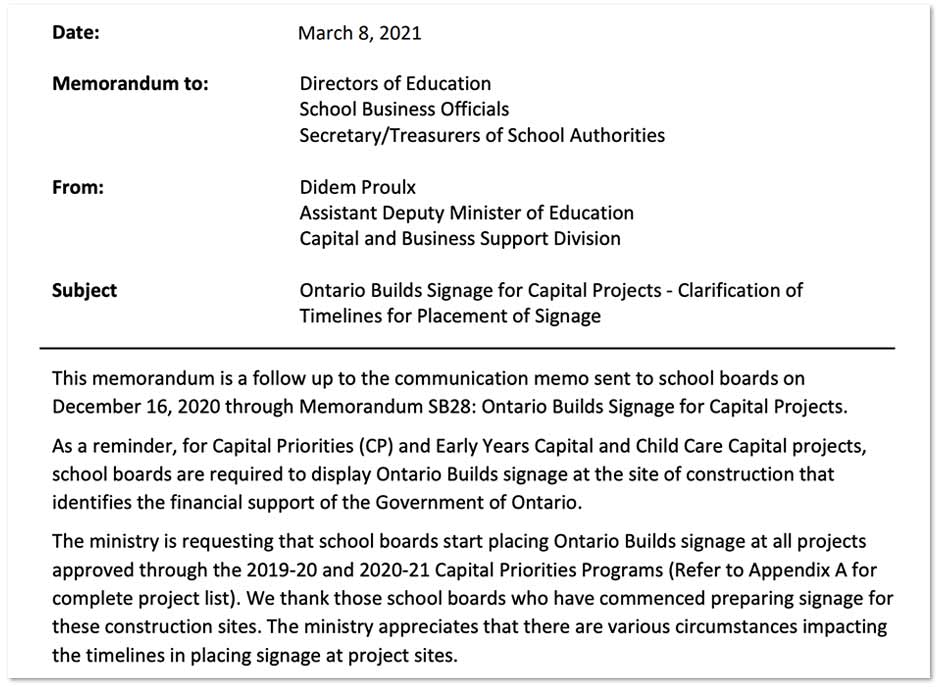 And the memo goes further, informing boards that they are also required to cover the costs of that signage out of their own pockets:.

“All expenses related to Ontario Builds signage, such as design, production, and installation are the responsibility of the school board. School boards are also responsible for posting the signs in a prominent, high-traffic location in a timely manner.”

The messages that appear on these signs are subject to Ministry approval, but the ministry offered a few suggestions:

“Examples of project descriptions that could be used on the sign include ‘New school and child care centre, ”New school,’ or ‘New school addition.'”

To help school boards design their own signs, the Ministry of Education provided school boards with helpful “sign templates” and a “visual identity guide,” through the Ford Government’s “Ontario Builds” program. 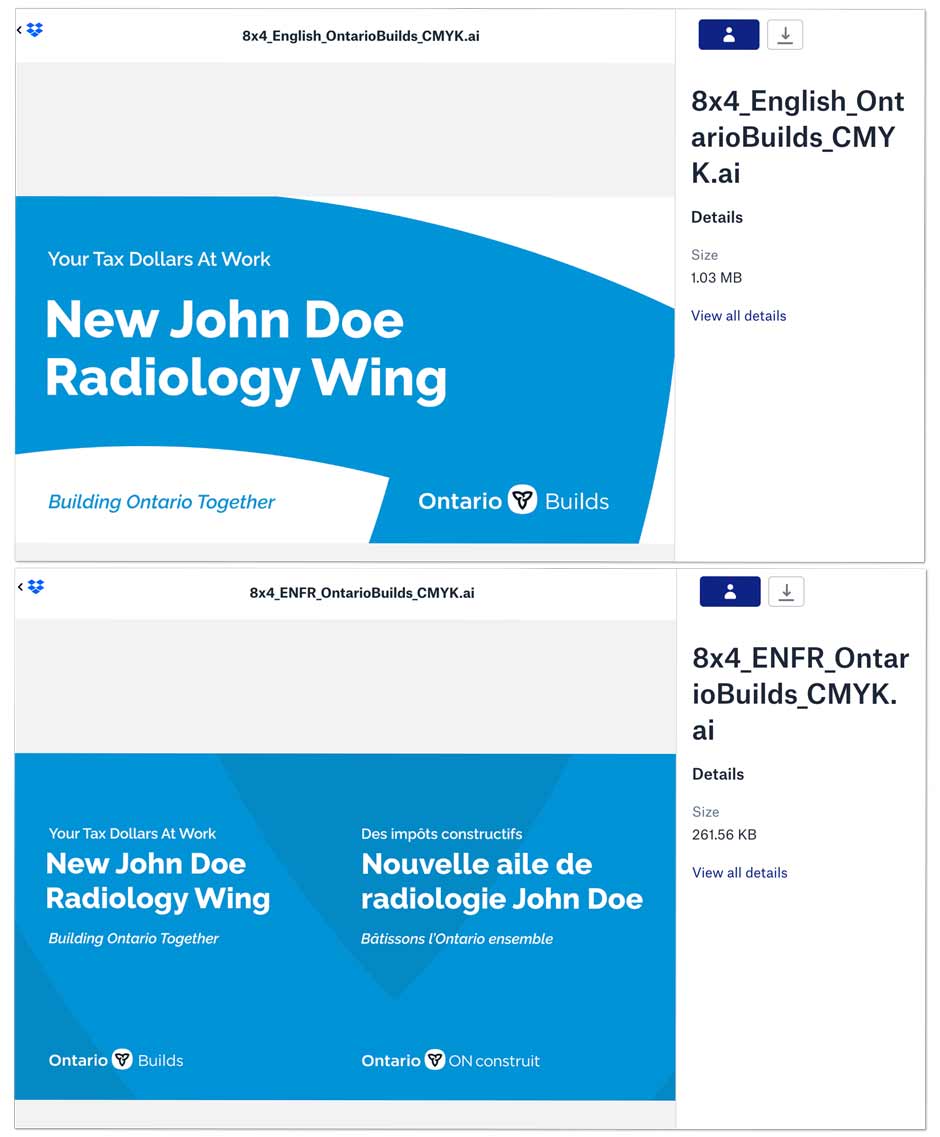 A spokesperson for the Ontario Public School Board Association confirmed its member boards received the memo.

A spokesperson for the Toronto District School Board told PressProgress that while it is not unusual for governments to use signs to promote their projets, the board has not been asked to pay for these kinds of signs themselves in the past.

“In the past, we have not had to pay for the design and creation of Ontario Builds signs — they’ve been provided to the TDSB free of charge and we were responsible for installing them — we will be seeking additional clarification on next steps on this process,” the TDSB spokesperson said.

A March 2018 Ministry memo — from the final weeks of Ontario’s previous government — instructed boards that the government would cover the costs for similar signs:

“Yet another glaring example of the Ford government failing to prioritize students, schools, and our public education system, in favour of self-promotion and getting re-elected,” Fix Our Schools Co-founder Krysta Wylie told PressProgress.

“This money, time, and energy would be much better invested in actually repairing, renewing and rebuilding Ontario’s publicly funded schools rather than using taxpayer dollars on a PR exercise for the Ford government.”

Toronto Catholic District School Board Trustee Norm Di Pasquale noted his school board already has existing policies over what kinds of signs can be displayed in schools.

“As Trustees, we have adopted the practice of not putting any signage on our schools that could be construed as political in nature. Our schools are a place of learning, not of self promotion.” Di Pasquale told PressProgress

“While this signage is not exactly political in nature, I worry it sets a bad precedent with respect to our policy,” Di Pasquale said.

School repairs have been a subject of some confusion for the Ford government. Ontario has a $16.5 billion school repair backlog that grows roughly annually as its capital depreciates.

The Ford government’s spending target, however, has fluctuated from $12 billion to $13 billion and sometimes $14 billion over ten years.