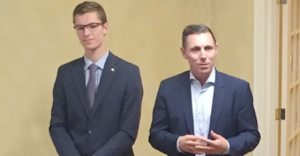 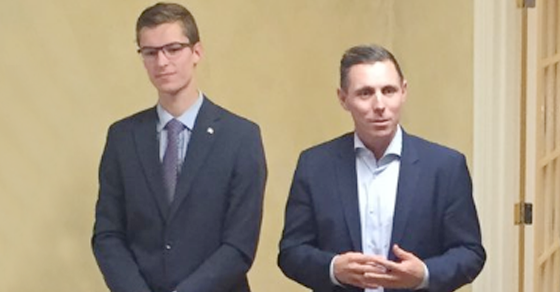 Does Patrick Brown know what his teenage candidate thinks about the ‘sins’ of ‘homosexuality’?

Social conservatives say Brown is "muzzling" the teenage candidate – his interest in hardline religious literature might be why.

Since becoming leader, Brown has made efforts to rebrand Ontario’s Tories as a party of the 21st century – and to his credit, he made the gesture of marching in Toronto’s Pride parade last year.

Of course, there are plenty of reasons to question Brown’s sincerity.

Only months earlier, Brown won the PC leadership by pledging to repeal Ontario’s sex-ed curriculum to secure the support of social conservatives paranoid about a so-called “gay agenda” (Brown would flip-flop on this promise).

Last month, the Conservative staffer won a surprise victory, earning the support of local social conservatives with his vocal opposition to abortion and sex education.

Although Brown’s been spotted knocking on doors with Oosterhoff in the lead up to this week’s provincial by-election in Niagara West-Glanbrook, social conservatives have loudly accused the Tory leader of “muzzling” the teenage candidate – and it’s not hard to guess why.

In one Facebook posting from last year, Oosterhoff cites a right-wing religious blog that criticizes society for celebrating the “sin” of “homosexuality”:

“Homosexuality is not the only sin mentioned in 1 Corinthians 6:9–10.

It’s not the only sin mentioned, but it is different from all the rest, at least right now. At this moment in history, contrary to the other sins listed here, homosexuality is celebrated by our larger society with pioneering excitement. It’s seen as a good thing, as the new hallmark of progress.”

The same Twitter account Oosterhoff currently uses for his campaign’s official communications also includes links to blogs that explicitly advocate a literalist interpretation of the Bible.

A Special Sort of Unbelief http://t.co/F0effIGdoi via @wordpressdotcom
Something to thing about… take God’s word at face value!

One link criticizes Christians who “have no problem with homosexual behaviour and see it as a healthy form of human sexuality.”

The blog criticizes suggestions from some Christians that the story of Sodom should be interpreted metaphorically, insisting that “the Bible is the inspired, infallible, and inerrant Word of God”:

“The Bible has to be our starting point and we have to take the Bible seriously on its own terms.  Scripture is quite clear about the sinful nature of homosexual practice.”

Other social media postings link Oosterhoff to events organized by the Association for Reformed Political Action.

ARPA Canada is a Reformed Christian political action group that says it rejects “secular humanism” and “bring a biblical perspective to our civil authorities” – lines that separate church and state.

The group’s website features articles that claim same-sex marriage is a “slippery slope towards polygamy” or that “the promotion of homosexuality in schools” is “spreading misinformation about homosexuality.”

In addition to being involved with the group’s political events, Oosterhoff’s brother, Aaron, is a board member of ARPA Canada’s Niagara chapter – something he might not want too many people to know about:

Seems there may be a few things Brown’s Tories don’t want too many people knowing about either.