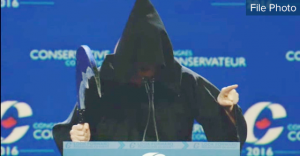 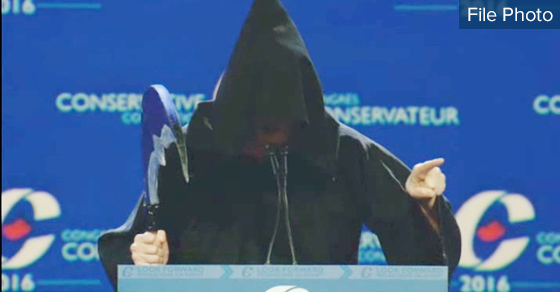 Is a Conservative MP trying to suppress attendance at her own electoral reform town hall?

As Members of Parliament spread across Canada to host lively and engaging town halls on the question of electoral reform, one Conservative MP is safeguarding against any possibility of disruptions by outsiders disguised as constituents.

And for an additional layer of security, Gladu says that once she’s provided with “proof of address,” she’ll cross-reference that information with the riding’s official list of electors before they’re allowed in to her town hall.

As Gladu – a rookie MP who has quickly earned a reputation for her views on Muslim immigrants, Donald Trump, teen suicide and dressing up as the Grim Reaper during the 2016 Conservative Convention – told the Sarnia Observer on Monday:

“We will have the electoral lists there so that we can verify that we’ve really got the voice of our constituents.”

Gladu’s website further specifies that her town halls are restricted to “official residents only.”

The possibility that these meetings could be infiltrated by outsiders and other agents provocateurs does not appear to be a widely held concern – Gladu is the only MP listed on the federal government’s website who is requesting “proof of address” or otherwise enforcing mandatory ID checks.

It’s also probably worth noting that unnecessary identification rules are a time-honoured tactic used for voter suppression during elections – particularly targeting voters based on income, age and race.

Last month, an appeals court struck down a North Carolina voter suppression law requiring voters to show ID, noting that “the State’s true motivation” behind the law was to “target African Americans with almost surgical precision.”

During that debate, over 160 Canadian political science professors signed an open letter published in the National Post condemning the Bill and arguing the voter-ID changes requiring proof of address would “reduce the likelihood of voting by some citizens,” particularly “students, senior citizens in long-term care facilities, First Nations citizens, and those who have recently moved.”

So what’s Gladu trying to do exactly – is she actually trying to suppress the turnout at her town hall?

According to the Sarnia Observer, Sarnia-Lambton constituents can ask Gladu that question directly during any of the following town halls she’ll be hosting (all events start at 6:30 pm and wrap up at 8:30 pm):