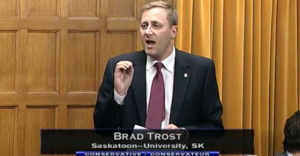 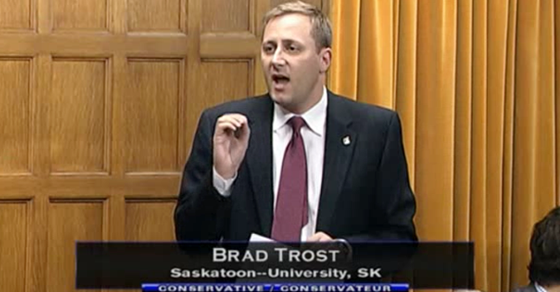 "This is a big government solution to a problem that does not exist," Trost said of protecting gender identity under Canada's human rights laws.

“This is a big government solution to a problem that does not exist,” said Trost, who announced his plan to replace Stephen Harper as Conservative leader in August during a family vacation to Mongolia.

Adding that it’s “something I firmly believe,” Trost added that human rights laws should only “restrain the government” rather than “input new discriminations”:

“The purpose of human rights legislation should be, by and large, to restrain the government, not to actually input new discriminations against other people.”

While 38 Conservative MPs – including interim leader Rona Ambrose – voted in favour of C-16, Trost has been outspoken in his opposition to efforts to extend human rights protection on the grounds of gender identity:

This week C-16 will be debated in the House of Commons, ask your MP why they will or will not be supporting it #cpcldr #canpoli pic.twitter.com/s1jnpHZz2v

Despite Trost’s claim that “the purpose of human rights legislation” is to “restrain the government,” the Canadian Human Rights Commission points out the purpose is to protect Canadians from discrimination – including the workplace.

Once it becomes law, C-16 will prevent employers in Canada from denying jobs to transgender people, for example.

The CHRC offers other examples, including banks refusing to make loans to people based on their race, employers forcing religious employees work on “the Sabbath” or firing employees because they are pregnant.

Trost thinks it’s discriminatory to prevent businesses from doing these sorts of things?

Bill C-16 passed second reading this week by a margin of 248 to 40 with support from all parties.