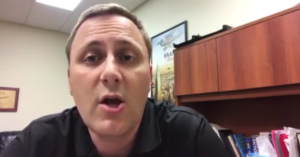 “We need to have conservative judges appointed by conservative politicians, there’s no if, and, but or maybe about it”

US President Donald Trump and the Republican congress are dangerously close to a conservative majority on the Supreme Court following last month’s retirement of Justice Anthony Kennedy, threatening to radically “reshape American life” and turn back decades of progress on issues like women’s rights and same sex-marriage.

Not only does Trost think that sounds like “good news,” he says it’s “sad that we don’t have a situation like that in Canada.”

In a webcam video posted to his YouTube channel, the Saskatoon-area Conservative MP calls the lack of any “ideological considerations” in the judicial selection process “one of the real failures of the Harper years in government.”

“It’s pretended in Canada that we don’t have a political system when we appoint justices,” Trost says. “We do.”

But he complains that “one thing though in Canada” is “Conservatives don’t actively get involved in the fight”:

“With some exceptions, and for short periods of time, ideological considerations were not really part of the conservative search for judges during the Harper years. It’s something that needs to change and small-c conservatives need to demand that from their big-C Conservative representatives. We need to have conservative judges appointed by conservative politicians, there’s no if, and, but or maybe about it.”

The video concludes with Trost encouraging his constituents to get in touch and “let me know what you think.”

Canada’s Supreme Court Justices are formally appointed by the Governor-General on the advice of the prime minister and cabinet. In 2016, an Independent Advisory Board was created to provide “provide non-binding, merit-based recommendations to the Prime Minister on judicial appointments to the Supreme Court of Canada.”

The Supreme Court Act requires that justices meet certain standards in terms of experience as a judge and barrister in Canada. Additionally, the assessment criteria for selecting justices requires they show qualities such as a “superior knowledge of the law,” “superior analytical skills” and “clarity of thought.”

Trost – who believes God put conservatives on earth to abolish all taxes, calls climate change science is “a lot of hooey,” suggests Muslims should be more worried about “cold” weather than “hate crimes” and wants to ban same-sex marriage – lost his nomination earlier this year to run for the Conservatives in 2019.