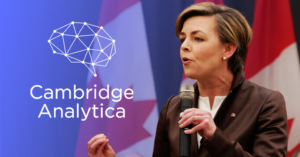 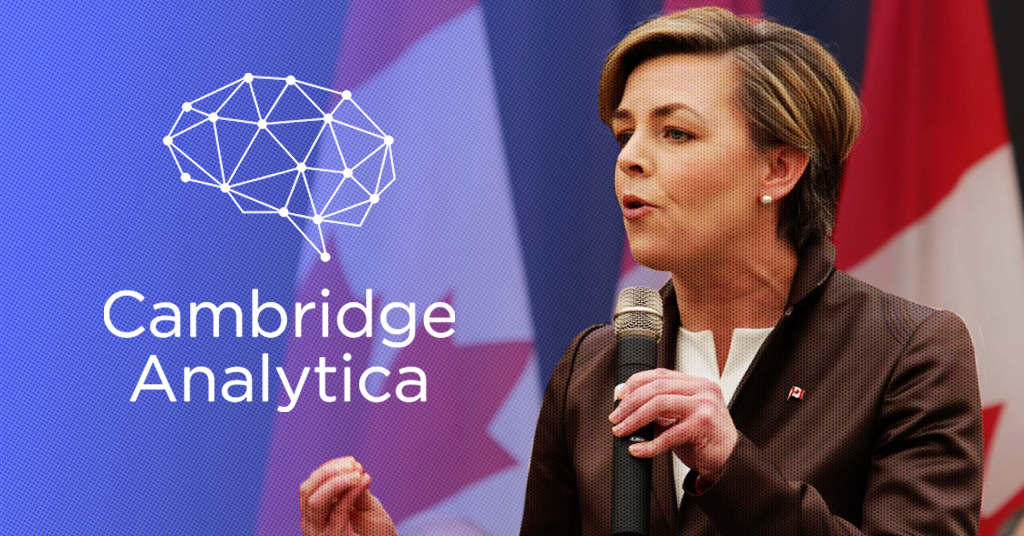 A firm accused of using big data and “black ops” tactics to manipulate elections around the world quietly pitched a plan to Kellie Leitch’s Conservative leadership campaign about using its data to identify potential supporters.

Cambridge Analytica, a now-defunct British data analytics firm best known for its work with Donald Trump’s 2016 presidential campaign, drafted a proposal to help Leitch find people who would be “receptive” to her ideas.

The firm offered to do this by targeting Canadians through a special data sharing arrangement with the far-right news website Breitbart.com.

The revelations offer new insights into Leitch’s failed 2017 leadership campaign, which was widely condemned as xenophobic and anti-immigrant — it even earned Leitch endorsements from white nationalist groups. 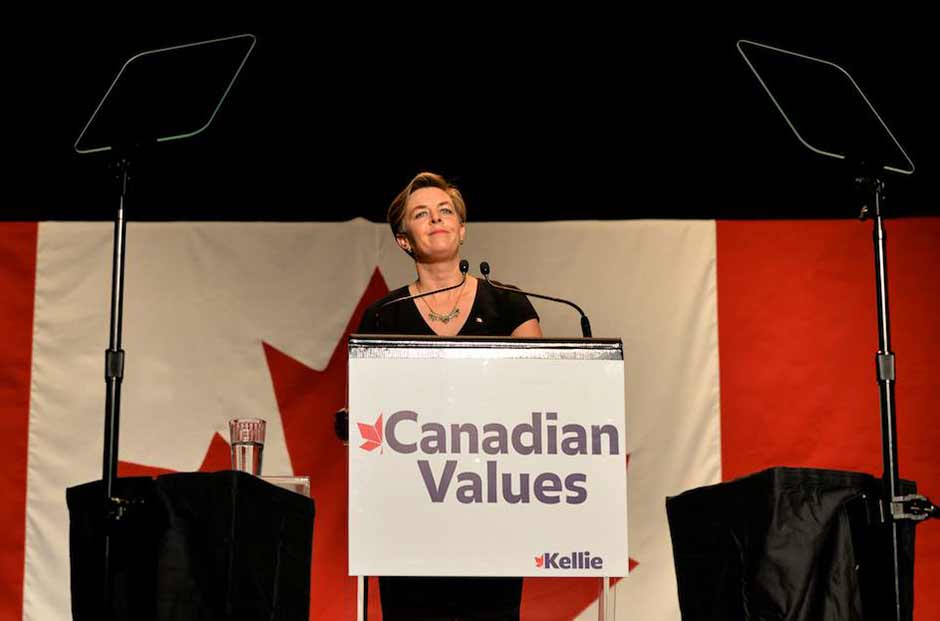 Cambridge Analytica’s proposal is contained in an expansive 750-page trove of documents obtained earlier this month by The Associated Press.

The documents, released in connection to a complaint alleging illegal coordination between Trump’s campaign and a super PAC, include internal emails and slides provided to AP by former Cambridge Analytica executive Brittany Kaiser.

Among the documents reviewed by PressProgress is a four-page proposal addressed to “Dr. Kellie Leitch.” 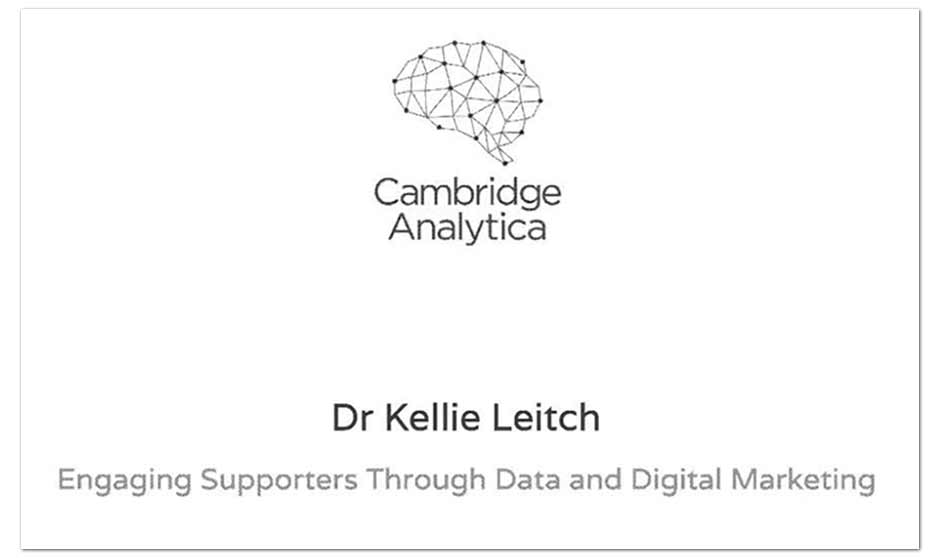 Titled “engaging supporters through data and digital marketing,” the document outlines a $20,000 per month proposal that would have seen Cambridge Analytica identify and recruit potential supporters for Leitch’s leadership campaign.

The proposal indicates that it expands on a strategy that apparently had been “previously discussed with the campaign team.”

Leitch, who moved to Mississippi following her exit from federal politics last year, did not deny knowledge of the Cambridge Analytica proposal, but insisted that the firm did not undertake any work for her campaign.

“At no time did my leadership campaign employ or work with Cambridge Analytica,” Leitch told PressProgress.

Leitch would not elaborate on what prompted Cambridge Analytica to prepare the proposal for her campaign. The document details plans to “design and implement a cross-platform digital campaign that will help Leitch identify new target supporters and communicate in a way that resonates with them individually.”

“In order to identify and engage supporters, Leitch needs an innovative approach,” the proposal explains.

“We will use our digital marketing infrastructure to identify target segments and advertising can be crafted to appeal to viewers’ preferences and interests, giving Leitch’s campaign a powerful advantage over traditional approaches.”

“Cambridge Analytica suggests that this campaign be executed over a minimum period of three months,” it says, “ensuring adequate target ‘touches’ to enable recall.”

“CA proposes to structure the campaign in such a way that it initially prioritizes recruitment of new members to the Conservative Party before transitioning into a persuasion campaign (to drive support amongst party members for Dr. Leitch’s candidacy) and voter mobilization (to drive turnout amongst supporters).” 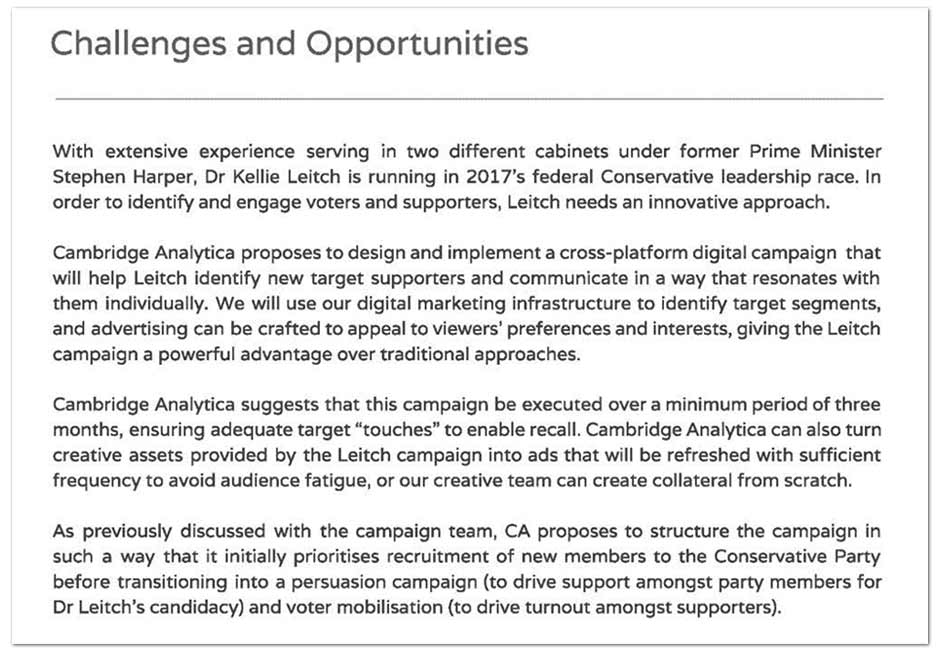 In testimony before the UK Parliament, a former Cambridge Analytica executive revealed the firm held “exclusive rights” to Breitbart’s engagement data, something that enabled the big data firm to tailor custom messages to individuals.

“CA will use our digital market infrastructure to find target segments of the Canadian electorate likely to be receptive to Dr. Leitch’s policy platform,” it states. “The digital campaign will deliver tailored creative content across websites and social media, serving multiple impressions of the content to target individuals.”

“This digital campaign can potentially make use of anonymized individual targeting of Breitbart.com visitors from Canada.”

Both Cambridge Analytica and Breitbart were, at the time, financed by Trump mega-donor Robert Mercer, a reclusive billionaire and major financial backer of some of the biggest names among the so-called “alt-right,” including the former head of  Breitbart: Steve Bannon.

Slides elsewhere in the trove of documents explain how Cambridge Analytica builds psychological profiles of individuals using bits and pieces of data scraped together from consumer data and Internet activities to “target voter groups.”

While Leitch denies her campaign took Cambridge Analytica up on its offer to use data on Canadian visitors to Breitbart.com, Leitch’s campaign did pay another Canadian far-right website for access to its audience.

On at least one occasion in March 2017, Leitch’s team used Rebel Media’s email list to send a “sponsored message” to Rebel’s database of supporters.

Leitch’s campaign filings also show she paid over $200,000 to a company run by her former campaign manager, Nick Kouvalis, who resigned from her campaign following a late-night Twitter tirade in 2017.

In a statement to PressProgress, Kouvalis said he could not confirm or deny he took part in discussions between Cambridge Analytica and Leitch’s leadership team.

“Anything Campaign Research Inc. may provide, in the course of its business, to its clients remains their private property,” Kouvalis said, adding his company could not publicly disclose information relating to the matter “unless specifically directed to do so by our clients.”

Kouvalis indicated he had been made aware of Leitch’s response prior to responding to a request for comment from PressProgress.