Canadian billionaire Jim Pattison, the sixth richest man in Canada and owner of the Save-on-Foods grocery chain, says the buck stops somewhere else when it comes to cutting hazard pay for frontline grocery store workers.

“I’m not involved,” Pattison told PressProgress in response questions about his company’s recent decision to cut grocery store workers’ $2 hazard pay in the middle of the ongoing coronavirus pandemic.

“We own and finance the company, but we don’t run them,” Pattison explained.

Pattison, who has reportedly picked up half a billion dollars in pocket change during the pandemic, said that the “company president makes those decisions,” noting that the Jim Pattison Group owns “24 different companies in various businesses.”

Thank you to our amazing customers, friends and neighbours for your positivity! Our team members are committed to helping you get the food and medicine you need, and we appreciate all the support we’re receiving from our communities. Save-On-Foods is here for you! pic.twitter.com/DTGBqMwMCM

Save-On-Foods announced last week it will replace the pay increase introduced back in March with a 10% discount on groceries and extra reward points.

Since the company introduced the hazard pay, Pattison’s wealth has reportedly grown significantly. The Forbes 2020 billionaire list shows Pattison was worth $4.3 billion USD on March 18 (one week after COVID-19 was declared a global pandemic), but more recent data suggests the tycoon’s real-time net worth currently stands at $4.8 billion USD as of June 1.

Save-on-Foods is owned by billionaire Jim Pattison, whose fortune has increased by $500M since March. #bcpoli https://t.co/VPq6K2jpL7

Anthony Schein, director of shareholder advocacy at the Shareholder Association for Research and Education, expressed doubts about Pattison’s claim that he has no say over the company’s decision-making.

“Mr. Pattison may not have direct responsibility over the operations in the companies he owns, but he certainly is in a position of influence and leadership,” Schein told PressProgress.

“As the CEO and Chair of Jim Pattison Group, if Mr. Pattison thinks it is appropriate to provide hazard pay to front line grocery workers during the pandemic, then a statement saying as much would most certainly make a difference.”

Christie Stephenson, a professor at UBC’s Sauder School of Business, pointed out “shareholders are usually an awfully influential stakeholder.”

We are strongly encouraging our customers to shop normally. There is enough food for everyone. With supply continuously rolling in, our team members are replenishing items for our customers needs. Together, we will get through this. https://t.co/bQdXt3gwuz pic.twitter.com/G8vQuuSXrn

Although Save-On-Foods introduced the hazard pay to show “appreciation for the team’s dedication” amid soaring retail demand, the hazard pay cut comes while BC is still in an official state of emergency due to the pandemic.

A screenshot of an email sent to Save-On-Foods staff obtained by PressProgress shows Jones telling employees: “Every time you shop, you can choose to receive 10% off or 30x More Rewards points on every transaction.”

“Our team members are by far our most valuable assets,” the email continues, “and I assure you that we have many unique plans in place — from gifts cards to free products – to recognize our teams across Western Canada.” 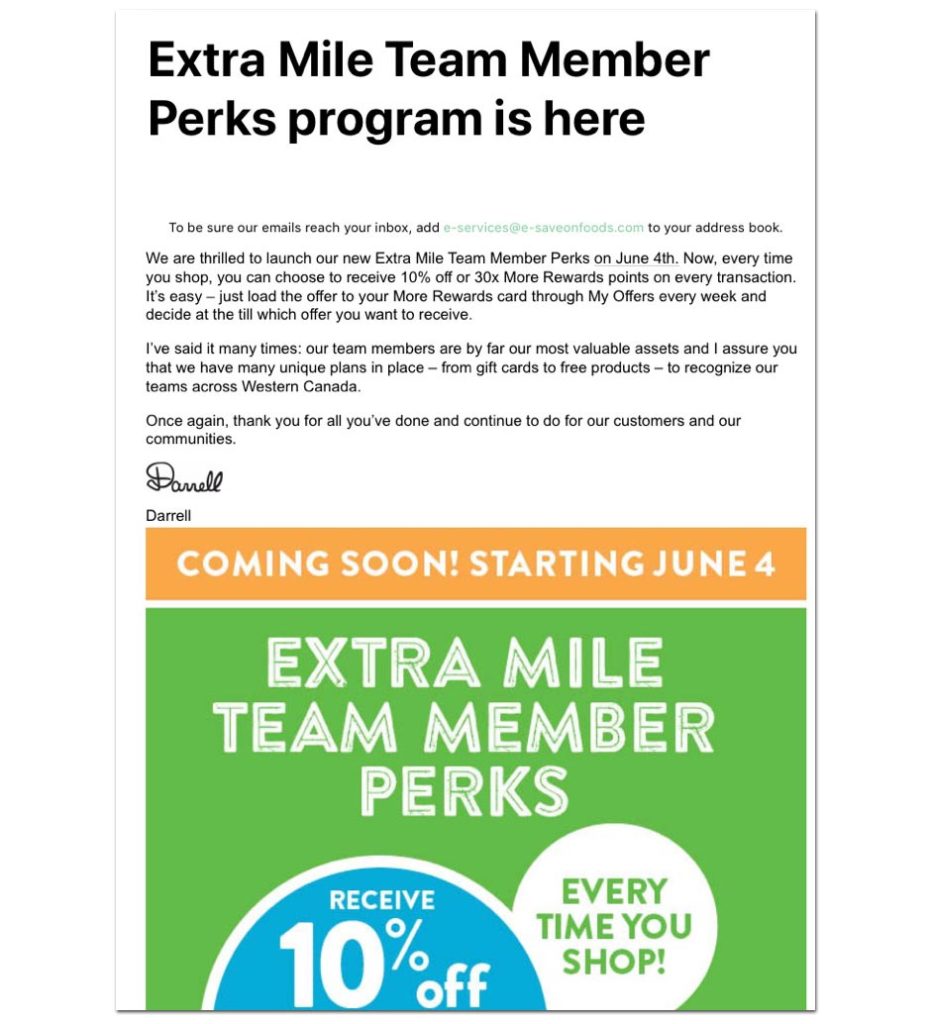 Save-On-Foods management did not respond to requests for comment from PressProgress about its decision to replace hazard pay with gift certificates and store discounts.

“The bonus goes back into Save-On-More’s pockets, increasing their profits
even further,” Novak told PressProgress. “Some younger workers mentioned to us that they have been told to bring their parents in to enjoy the grocery discount. These young workers can’t believe Save-On-Foods feels they have the right to tell them how to spend their hard-earned money.”

“A discount and extra rewards points is simply not a fair trade for higher compensation, especially since the company pulled in millions of dollars in extra profits while they were paying the $2 per hour Pandemic Premium,” she added.

Prior to BC’s big money ban, Pattison’s companies have made hundreds of thousands of dollars in corporate donations to the provincial BC Liberals.

In a recent interview with Global News, Pattison was asked whether he thought the pandemic had raised public awareness about the importance of grocery store workers.

“The grocery store people … anybody dealing with people … our people have put a lot of effort into making sure that to the best of our ability that we follow all the rules and regulations,” Pattison said.