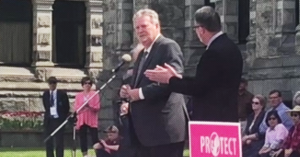 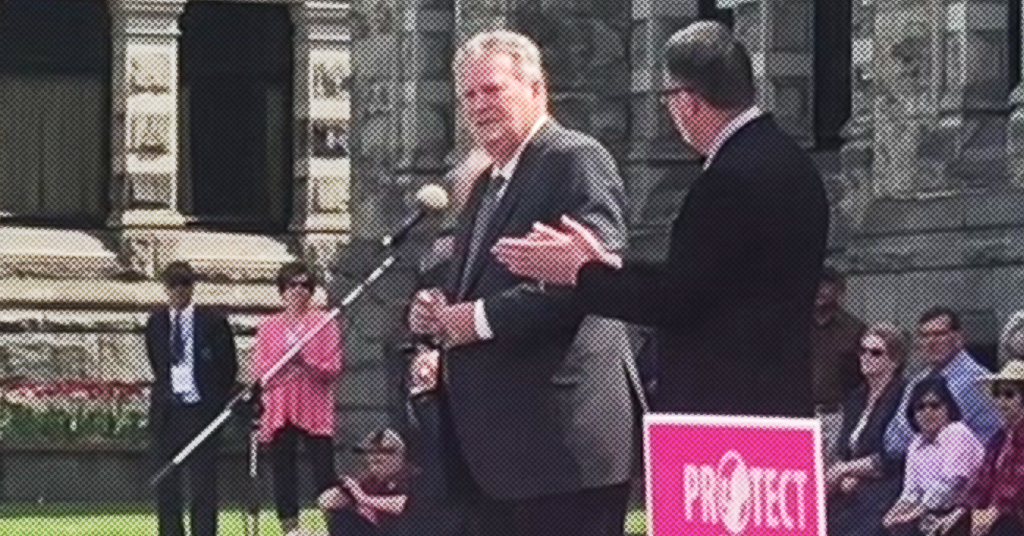 Two BC Liberal MLAs shared a stage with hardline social conservative groups, including the leader of a Christian nationalist party, at an anti-abortion rally Thursday afternoon in front of the BC Legislature.

Coleman and Throness were followed by other speakers including the leader of the Christian Heritage Party of Canada, a political party that advocates bringing “law and order in accordance with Biblical principles.”

During his speech, Coleman told a crowd of anti-abortion activists they are the “children of God” and said he “can’t get” why anyone would ever be opposed to “life,” adding that they “need to protect it” and “stand up for it”:

The BC Liberal MLA added that he thinks abortion is “totally, totally wrong for me”:

Throness, meanwhile, encouraged anti-abortion activists to be more aggressive in promoting their views on social media:

Following the two BC Liberal MLAs, was Christian Heritage Party leader Rod Taylor who said anti-abortion activists working to strip women of their reproductive rights are treated like “second-class citizens.”

According to its constitution, the CHP believes “civil government to be under the authority of God,” and argues government decision-making processes “must not in any way contravene these Biblical ethics.”

“For too long, thinking men and women, every one of whom was at one-time a pre-born person, have allowed the unthinking media narrative of unfettered choice to cloud the issues of life.”

“Every pre-born child deserves an advocate in the House of Commons, in the BC Legislature and in the legislatures of every province across this country,” he said.

Photos show Taylor and Throness shooting the breeze at the event: 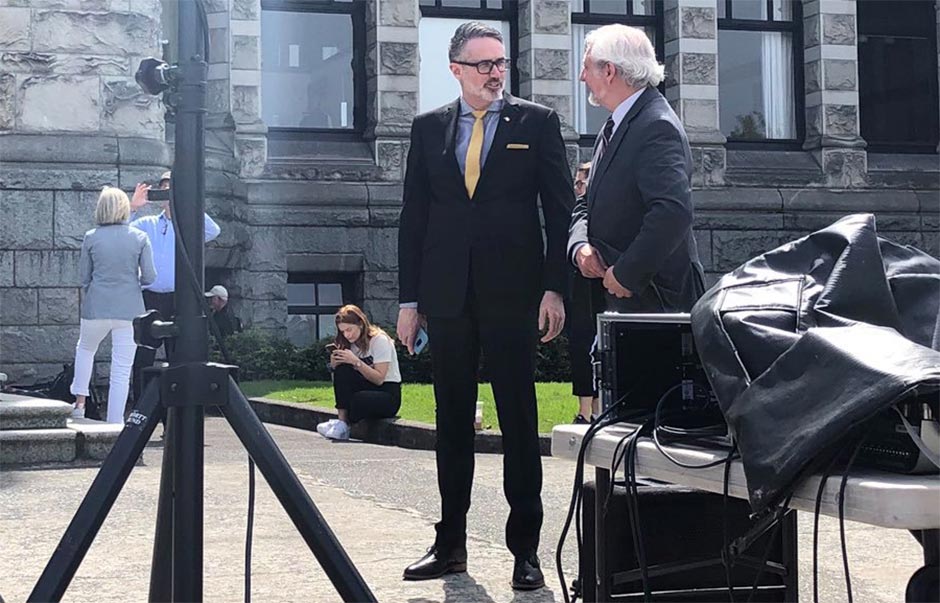 Meanwhile, Autumn Lindsay, an American anti-abortion activist with the group Students for Life offered a story about “Germany during the Holocaust,” alluding to “people who were being sent off to concentration camps” in trains.

“We might not have train tracks behind our churches,” Lindasy said, “but we have abortion facilities behind our homes, our grocery stores and our schools.”

Also speaking at the rally was Anna Nienhuis, an activist with the anti-abortion group We Need a Law, which is linked to a social conservative pressure group called the Alliance for Reformed Political Action.

On its website, ARPA declares it is against the separation of church and state, asserting “the Lordship of Jesus Christ must apply to every sphere of life, including politics” and  adding: “We believe religion and politics can mix.”

Following Coleman and Throness’ anti-abortion statements, BC Liberal leader Andrew Wilkinson tweeted: “Our position as a party has not changed in that we support a woman’s right to choose.”

Wilkinson did not mention Coleman and Throness by name.

Coleman got into trouble with the party leadership last week after he compared an agricultural land bill to the Holocaust while Throness, who regularly voices other socially conservative positions, was vocal in his opposition to BC’s SOGI 123 initiative, a program designed to prevent bullying against LGBTQ children.

Update: This story has been updated to include a photo of BC Liberal MLA Laurie Throness and Christian Heritage Party leader Rod Taylor.