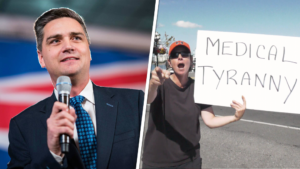 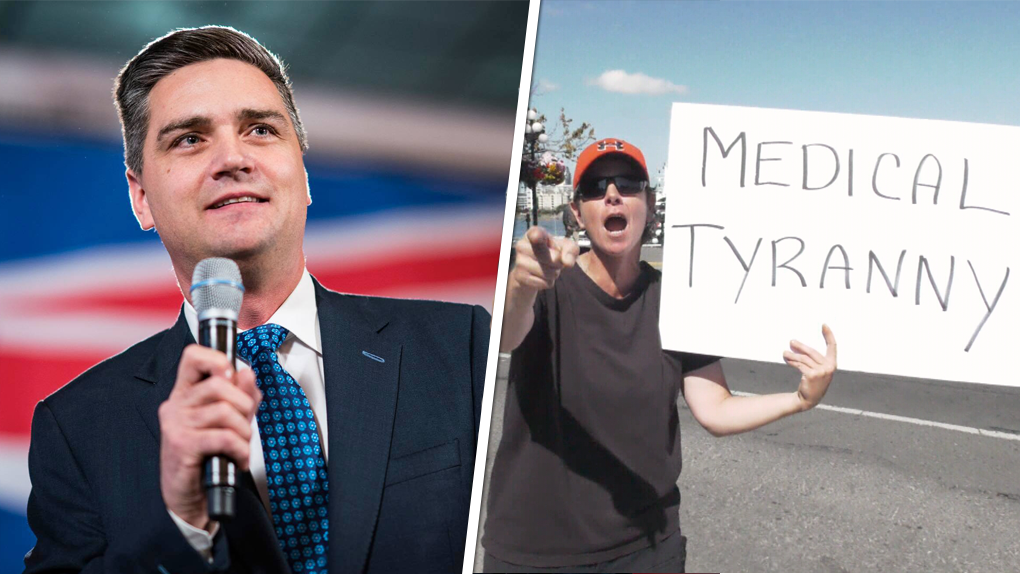 Thousands of protesters gathered near hospitals across the province Wednesday, including hundreds of people in front of Kamloops’ Royal Inland Hospital.

Most of the participants were unmasked and did not practice social distancing. Many carried signs decrying the proof-of-vaccination program as “tyranny.”

The protests were widely criticized by health care professionals, with doctors and nurses taking to social media to describe disruptions to hospital services caused by the rallies.

Powerful and heartbreaking words from a frontline BC healthcare worker whose hospital was the site of one of many anti-vaccine passport/health measures protests held today here and across the country. pic.twitter.com/MUauWcqi5o

But in an interview with Kamloops’ CFJC Today, the BC Liberal MLA said that although he was “disappointed” with the protesters’ choice of location, the protests drew attention to “valid questions” the government needs to answer.

In the interview, Stone questioned the lack of exemption for medical situations, whether government support for small businesses will be made available and whether tourists and visitors from outside BC will be subject to the program.

BC announced a proof of vaccination program last week that applies to a wide range of activities, including indoor concerts, dining at restaurants, movie theatres and recreational facilities.

Starting September 13, people ages 12 and older who wish to access these venues must have at least one shot of a COVID-19 vaccine. Full vaccination will be required after October 24. Proof of vaccination programs have already been announced in BC, Quebec, Ontario and Manitoba.

Some businesses have vowed to defy the mandate, organizing a Facebook group with hundreds of thousands of supporters and pledging to create their own app to help people find anti-vaccine passport businesses.

Despite lending support to the anti-vaccine protesters’ concerns, Stone noted that he thinks it’s “terribly unfair” to hold such a protest in front of a hospital where workers on the front lines are working to save people’s lives.

View from the OR today. The same OR that is running at <60% capacity for the 3rd week in a row due to an overwhelming # of COVID+ unvaxxed hospitalizations. I’ve never been so disappointed in my community. pic.twitter.com/bAfn3iunv2

“Frankly, the vast majority of folks who are in Royal Inland Hospital today because of COVID are unvaccinated,” Stone told CJFC Today.

BC’s Interior Health Authority has seen a surge in COVID cases this summer, causing the provincial health authorities to reintroduce a mask mandate for the Central Okanagan region in early August, followed by restrictions on social gatherings and restaurant dining a week later. The region also has some of the lowest vaccination rates in the province.

At an anti-vaccine passport rally in Nanaimo, protesters spat on a healthcare worker. A counter-protester was arrested at the Kamloops rally for throwing eggs at protesters.

This is not the first time protesters opposed to lockdowns, masks or vaccine mandates have harassed health care workers.

In May 2020, anti-lockdown protesters blocked an ambulance bay at Vancouver’s St.Paul’s Hospital. Some of the protesters live-streamed the incident, while they accused hospital staff of being “corrupt”.

The protesters claimed that “the hospitals are empty” and chanted: “No vaccines.”https://t.co/Olqun8YkDC #cdnpoli #bcpoli

In June, the BC Liberals’ Health Critic, Kelowna-Mission MLA Renee Merrifield, presented an anti-mask petition to the Legislature that was identical to a petition launched by an anti-mask group called “Unmask Our Kids”.

Stone vowed to continue questioning the BC government over the details of the program.

Stone’s office did not respond to a request for comment from PressProgress.