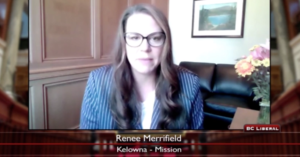 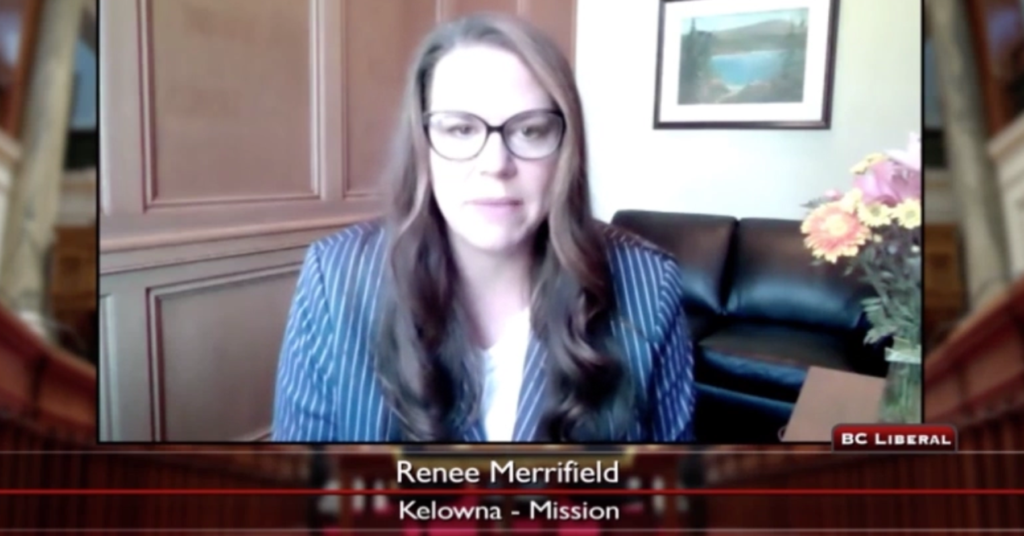 Petition organizer linked to anti-lockdown rallies in Kelowna and Penticton

The BC Liberals’ health critic is facing questions after presenting the BC Legislature with an anti-mask petition started by an anti-lockdown activist.

On Thursday, BC Liberal Health Critic Renee Merrifield tabled the petition on behalf of parents in British Columbia school districts “across the province”:

“I would like to present a petition today on behalf of 4,500 parents of British Columbia students, representing all 60 school districts across the province.

These parents are opposed to the current provincial health order in relation to mandatory masking of school children. They oppose the mandate for all children in grades 4 through 12 and do not support further measures to extend masking to lower grades.

The organization has an intention not to divide people, instead they simply want parents, children, people of BC to be able to retain their autonomous rights over the decisions surrounding their children. I will forward the petition to the office of the clerk on behalf of these parents.”

Merrifield quickly came under fire for promoting the petition. Later in the day, she responded to the controversy on Twitter:

“I have always supported wearing masks to prevent spread of Covid19 & all other health orders. Petitions from constituents are presented in the BC Legislature daily. As an elected official it is my role to present petitions from my constituents when they request it.”

Merrifield added: “while I disagree with (the petition’s) premise, I fulfilled my role, as their MLA, in the presentation.”

Today, I presented such a petition and while I disagree with the premise, I fulfilled my role, as their MLA, in the presentation. #bcpoli

BC updated its public health guidelines back in March to mandate masks be worn in schools for grades 4 through 12 in an effort to curb COVID-19 outbreaks among students — a move welcomed by many parents and the BC Teachers Federation.

Although Merrifield did not name the organization behind the anti-mask petition, her description of the group’s demands matches verbatim the wording of a petition launched by an anti-mask group called “Unmask Our Kids.”

“Examples of coercion, bullying, disrespect, segregation, intimidation, physical, and further emotional impairments to children and their families due solely by the current provincial health order.”

Although the website does not provide any information about who is behind the group, a Kelowna resident named Priscille Belisle has publicly identified herself as one of the petition’s organizers on an anti-vaccine Facebook group.

Sharing a link to the petition yesterday in a group called “Protect All Children ~ YES to Parental Consent ~ No to Medical Procedures,” Belisle wrote:

“We submitted the petition and impact statements to our MLA today 😊 Renee Merrifield, who is the Official Opposition Critic for Health will be presenting the petition in the BC Legislative Assembly in the next couple of weeks.”

“Our children and future generations will be able to find these documents and see that we fought back against the restrictions! We should all be proud of our actions because every voice matters, especially when we collectively use our voices to protect our children’s rights and freedoms.” 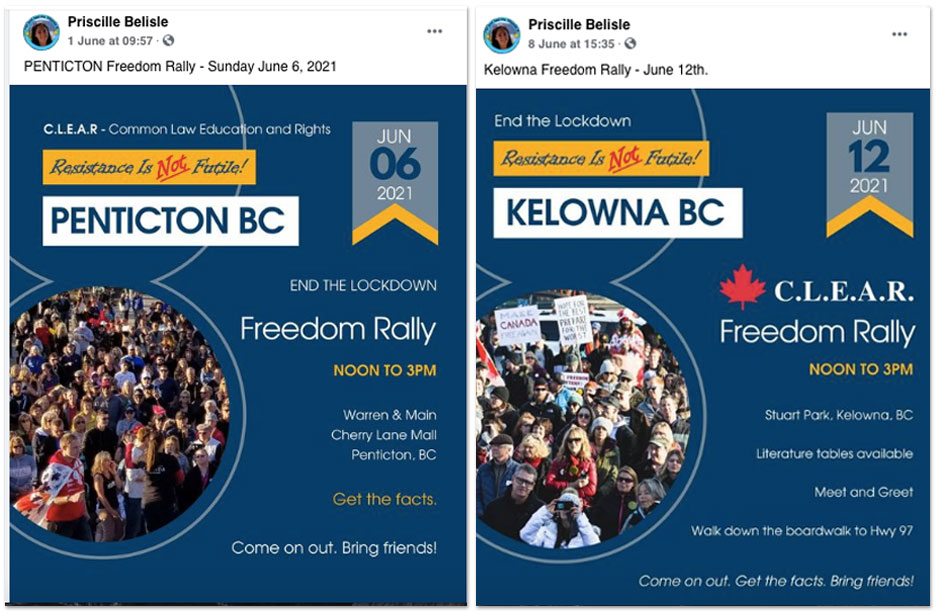 Asked what motivated her to launch the petition, Belisle told PressProgress: “This petition is not about being anti-mask, or anti-anything. That kind of rhetoric is getting old and only serves to divide people.”

Belisle said her recent promotion of anti-lockdown rallies were intended to showcase her graphic design work and did not necessarily mean she endorsed the events.

“I design posters, websites, flyers, postcards and marketing material for different companies and organizations. That doesn’t mean I endorse or represent them.”

“My opinions and beliefs are irrelevant,” Belisle said, adding that “the petition has nothing to do with me personally” and accusing PressProgress of being “more interested in attacking my character” than the fact “children are suffering.”

Despite claiming she does not endorse anti-lockdown rallies, a YouTube video posted in May shows Belisle giving a speech at one such rally in Kelowna standing in front of an image of a syringe crossed-out with a red “X.”

In her speech, Belisle praises the leader of a Canadian anti-vaccine group, warns of vaccine “propaganda” in BC schools and personally thanks Merrifield for helping her group get the petition started.

“We got in touch with our local MLA, Renee Merrifield who is the official opposition critic for health, and we learned that the BC Legislative Assembly was changing their petition rules and would start accepting e-petitions,” Belisle said.

“We took advantage of this opportunity.” 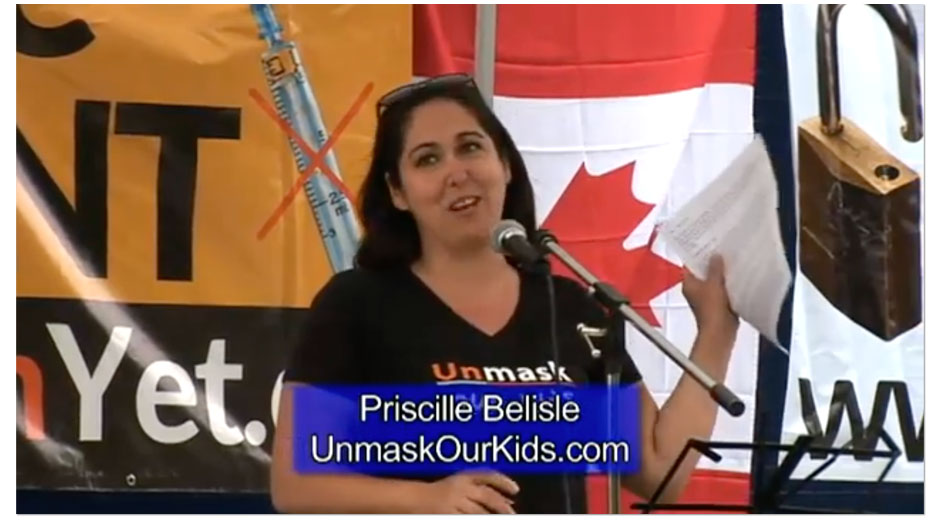 Merrifield came under fire last April after pushing the unscientific claim that “vitamin D” can help to “help fight off COVID-19.” Pundits have speculated that she is mulling a run for BC Liberal Party leader.

The BC Liberal Caucus did not respond to a request for comment from PressProgress asking whether BC Liberal MLAs would continue presenting petitions from anti-mask or anti-lockdown activists in the future.

Update: This story has been updated to include a photograph of Priscille Belisle giving a speech at the May 24 anti-lockdown rally in Kelowna and added a quote in which Belisle thanks Renee Merrifield.