School district officials in Red Deer are refusing to disclose if Alberta taxpayers were billed for a fleet of buses that sent “a lot” of students to the annual March for Life anti-abortion rally in Edmonton.

“I’m not interested in speaking to you,” Red Deer Catholic Regional Schools Chair Anne Marie Watson told PressProgress when asked who paid for the fleet of buses.

According to Alberta Politics, which first raised questions about the buses last week, “the majority of the 1,000 or so marchers” at the anti-abortion rally were “made up of high school students bused into town from places like Red Deer and Barrhead and the teachers who shepherded them.”

A parental permission slip obtained by PressProgress indicates administrators at Red Deer’s St. Joseph’s High School informed parents that the school had arranged transportation to the event and that the cost for attending “the event itself is free.” 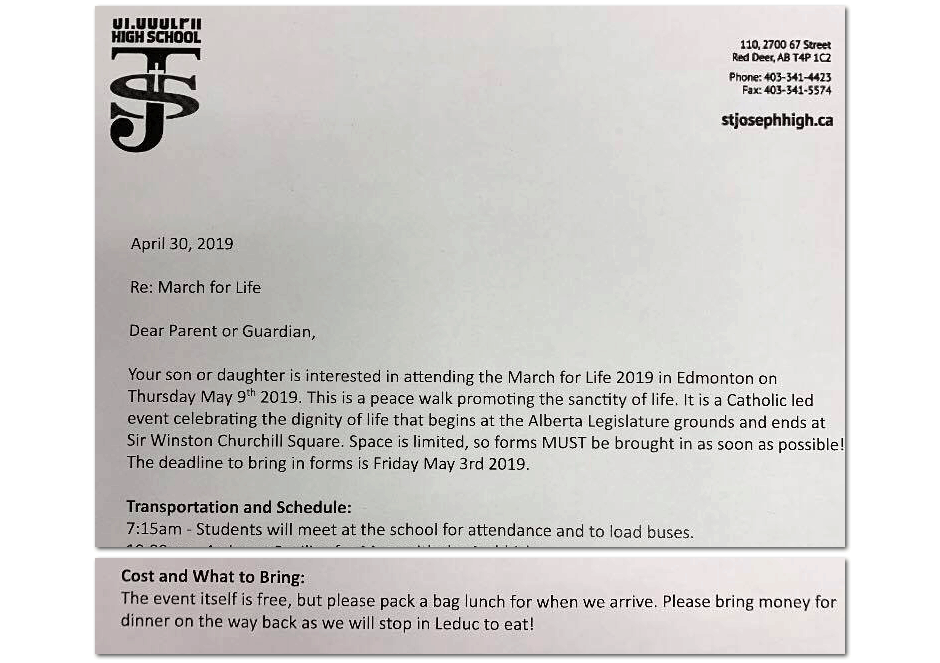 Administrative staff confirmed to PressProgress the school “chartered” buses and lined-up substitute teachers to cover for teachers who were chaperoning students at the rally, which urged political action against abortion laws.

“It sounds like a lot went,” one administrative staffer at the high school admitted.

Kelly Aleman, President of the Alberta Teachers’ Association Local in Red Deer, said such expenses are a misuse of public resources, noting “there would be an outcry” from Alberta Premier Jason Kenney if schools used “public funds to take a position on a social issue.”

“I’d be curious to know the perspective of the Premier,” Aleman said.

“During the student GSA walkout, (Kenney) said he’d prefer if students stayed in class and kept protesting to their own time.”

In a statement to PressProgress, Alberta’s ministry of education suggested that only local school trustees are “accountable” for “local policy decisions.”

“School jurisdictions have flexibility to make local policy decisions,” said a ministry spokesperson. “School board trustees are elected and accountable to the citizens in their local communities.”

Four of Red Deer’s Catholic school trustees all declined comment when asked if public funds were used to send students to the anti-abortion rally.

The same school district refused to disclose how it paid for buses that sent students to the same rally last year. In 2017, the school district made national headlines after Red Deer Pro-Life, a local anti-abortion group, delivered a presentation to students that featured a video comparing abortion to the Nazi Holocaust.

The Red Deer Pro-Life representative also instructed students that it is “not okay” for women to have abortions, even if doing so would “remind her of her rapist.”

Adriana LaGrange, who Kenney appointed as Alberta’s education minister earlier this month, previously served as a trustee with the Red Deer Catholic School District and was the long-serving president of Red Deer Pro-Life.

LaGrange was one of 52 United Conservative Party nomination candidates who won their nomination with the help of anti-abortion groups that quietly work to stack nomination meetings with the goal of installing candidates sympathetic to a social conservative policy agenda.